Original written by navy_korabel and posted on his livejournal blog; translated from Russian by J.Hawk.

Available information indicates the planned modernization of at least two Project 11442 heavy cruisers assumes the exchange of their current missile armament for the most modern systems available. There is no certainty that everything that’s planned for Admiral Nakhimov will be completed by 2019, but there are reasons to believe that Pyotr Vellikiy (as well as, possibly, Admiral Lazarev and the Nakhimov itself during the next round of modernization) will receive a full fit of most modern weapon systems.

Napkin calculations carried out by the author of this blog gave remarkable results: if the process of designing new ships usually results in lack of space and weight for the planned weapon systems, Project 11442M ships have an excess of volume and weight to spare, due to the reduction in the size of new missile systems. In other words, modernized Orlans can fit more weapons that they could ever need.

Theoretically, the place of the 20 current 3M45 Granit anti-ship cruise missiles could be taken by 60 Kalibr and Oniks family missiles, or three launch containers for every Granit launch tube, just as it’s being done with the Project 949AM cruise missile nuclear submarines. On the other hand, Navy chief Chirkov said that the rebuilt Nakhimov will carry “80 missiles with various missions”, likely meaning strike cruise missiles since the total missile arsenal of the third Orlan before modernization was twice as large–20 Granits, 96 Fort SAMs, and 40 Osa-MA SAMs.

60 or 80 strike missiles is a very good thing. No Soviet ship carried a battery of that size (the most was 24 on Project 949A submarines). Ticonderogas carry a standard load of 26 Tomahawks, Arleigh Burkes 24 (though during the Gulf War, cruiser Bunker Hill took RGM-109C into each of its Mk41 silos, which increased its load to 122 missiles, though it didn’t have to worry about the air threat). Still, 60-80 missiles equals 1.5-2 massed anti-ship volleys plus the same amount against land targets. Doesn’t seem like a lot for a “missile battleship.”

My quick study, the results of which are presented below, uses the diagram of the general layout of Project 11442 missile cruiser from Apalkov’s reference book “Soviet Navy Ships” (volume II, part I), the size of the UKSK launch module (3.76m by 1.97m–the height doesn’t matter here), obtained from the KBSM presentation at MVMS-2005, and the scaled to the ship’s greatest width, which equals 28.5 meters. The first, “saturated”, version presupposes UKSK modules located close together which should not present problems since all the servicing connections can be placed outside of the launch silo cluster. The second, “moderate”, version avoids such problems completely.

160-240 cruise missiles–that’s serious business. Such a missile load plus two sets of reloads from an accompanying fleet replenishment ship could allow the cruiser to wage war against some ISIS for a month, launching them against HQs, concentrations, and troop columns at a rate of 20 missiles per day. This is an adversary one has to take into account by rethinking dubious (i.e., adventurous) political decisions. This is the whole point of the non-nuclear strategic deterrence doctrine. 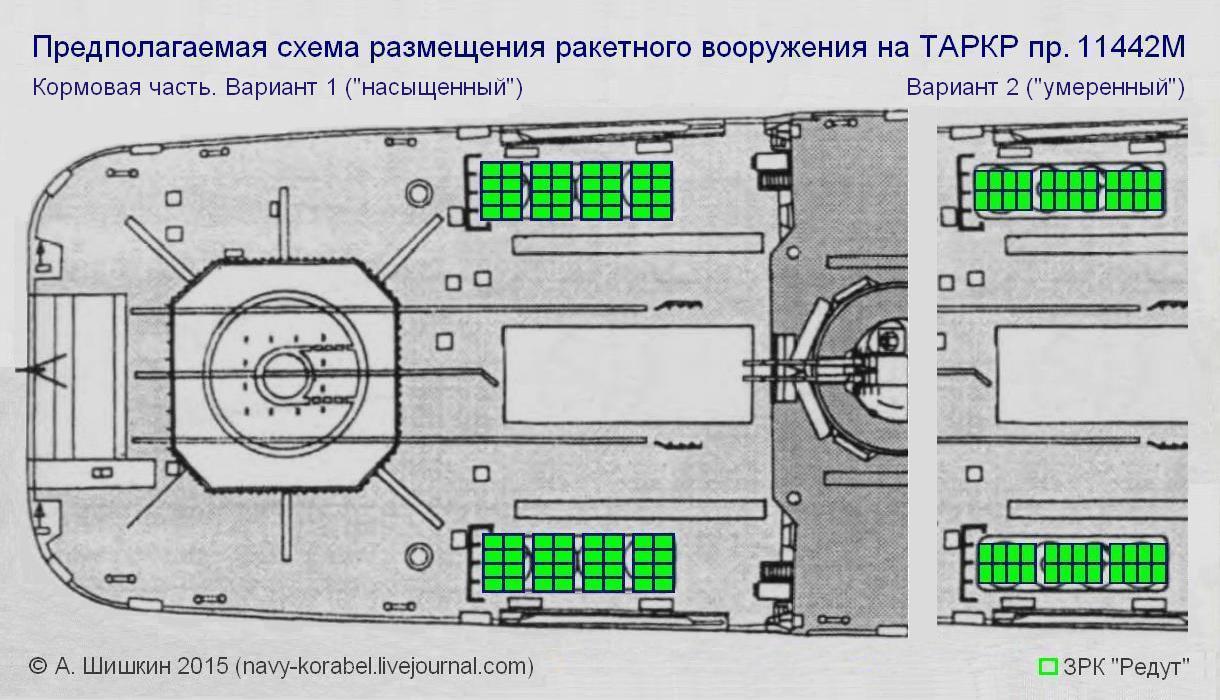 As far as VMF needs are concerned the newest ultra-long range 40N6 SAM of the S-400 system which has a range of up to 400km and which is at the final stage of acceptance trials is not only useful because it can shoot down Hornets outside of their Harpoon launch zone (120-150km). The main expectation is that it can deprive the carrier battle groups of the potential adversary of their main advantage in naval warfare, namely autonomously detect (without reliance on space assets) naval targets up to 700km and direct carrier-based strike aircraft against them.

Available information indicates that the Hawkeyes patrol about 320m from the carrier battlegroup (CBG). Their detection range is limited by the horizon and at E-2C practical ceiling of 9390m is about 350km. Therefore a surface action group (SAG) built around a Project 11442M cruiser can destroy Hawkeyes shortly after they establish their radar contact (if the speed of the 40N6 missile is comparable to that of 9M83 missile of the S-300V system, it means that the E-2C will be hit 5.5 minutes after launch). The unmaneuverable prop-driven Hawkeye would have few chances to evade the almost-hypersonic missile.

A Nimitz air group includes only four Hawkeyes, and if the duty pair is shot down, the contact will be re-established in only half an hour. The absence of continuous target designation would complicate sending the first strike wave but would not cancel the attack (the original coordinates from the first shot-down Hawkeyes would suffice). However, without their “hawk eyes”, the CBG loses much of its combat power.

Note: There is at least one case of a Russian long-range missile engaging a Hawkeye. According to unconfirmed information, a Soviet S-200 crew deployed in Syria shot down an Israeli E-2C at a range of 190km. Even if it’s not true, and the plane only “quickly lost altitude” in order to avoid missile fire, the S-200 still won because it forced the Hawkeyes to maintain at least 150km distance from Syria’s shores which complicated their ability to direct Israeli air power. 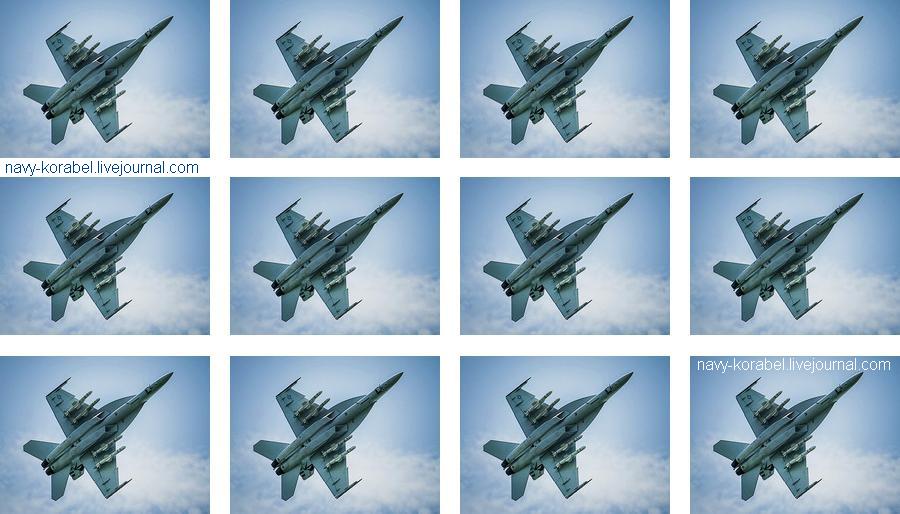 Project 11442 modernization creates the unique opportunity to quickly establish a deeply echelonned ship-based air defense system consisting of unheard of five belts: ultra-long range, long range, medium, close, and very close. One should hope that the system of this sort will be implemented, even if not all at once.

Even today the capabilities of some of our 3rd-generation large surface ships (11442, 1164, 956) prevent them from being attacked except by over the horizon cruise missiles. But even the longest-ranged SAMs can’t fully prevent launching a mass cruise missile attack by attack aircraft from over the horizon. The missiles will have to be engaged independently of their carriers.

In this respect the modernized Orlan (as the author of this blog imagines it) won’t have an equal for half a century. The available space and volume, including what has not yet been utilized (for example, for the forward Kinzhal battery) allow the ship to accept a huge amount of anti-aircraft missiles. It makes sense to concentrated the long- and medium-range SAMs where the S-300F battery used to be, and the short-range weapons in place of the Kinzhal at the bow and the stern.

In the first instance, in order not to increase the number of types of vertical launch systems, it would be ideal to use modernized UKSK modules (at first glance there shouldn’t be any problems with that), and in the second instance to rely on the Redut system modules (3.25m by 2.25m). It would be, overall, ideal to create a genuinely universal launch system for all types of naval missiles.

In order to assess the capabilities of the proposed air defense system let’s consider the following improbably (and practically impossible) situation when a US CBG launches its entire air group at an Orlan-centered SAG, namely 4 squadrons of 12 F/A-18E/F, leaving the CBG without any air cover. Moreover, all attacking aircraft are armed with 4 Harpoons apiece (which would turn them into sluggish bomb trucks, and in any event the first test flight of a Hornet with 4 Harpoons took place only in October 2013). Finally, let’s assume that all 48 Hornets covered 550km km without a mishap (Ka-31 and 40N6 notwithstanding) and launched all 192 missiles successfully.

The table below which lists the summary capabilities of Project 11442M air defense systems suggests that even in such an extreme case it would be able to defeat two such massed attacks. Even though the intuition suggests there will not be enough missiles or aircraft remaining to launch a second such attack, it’s best not to tempt fate. 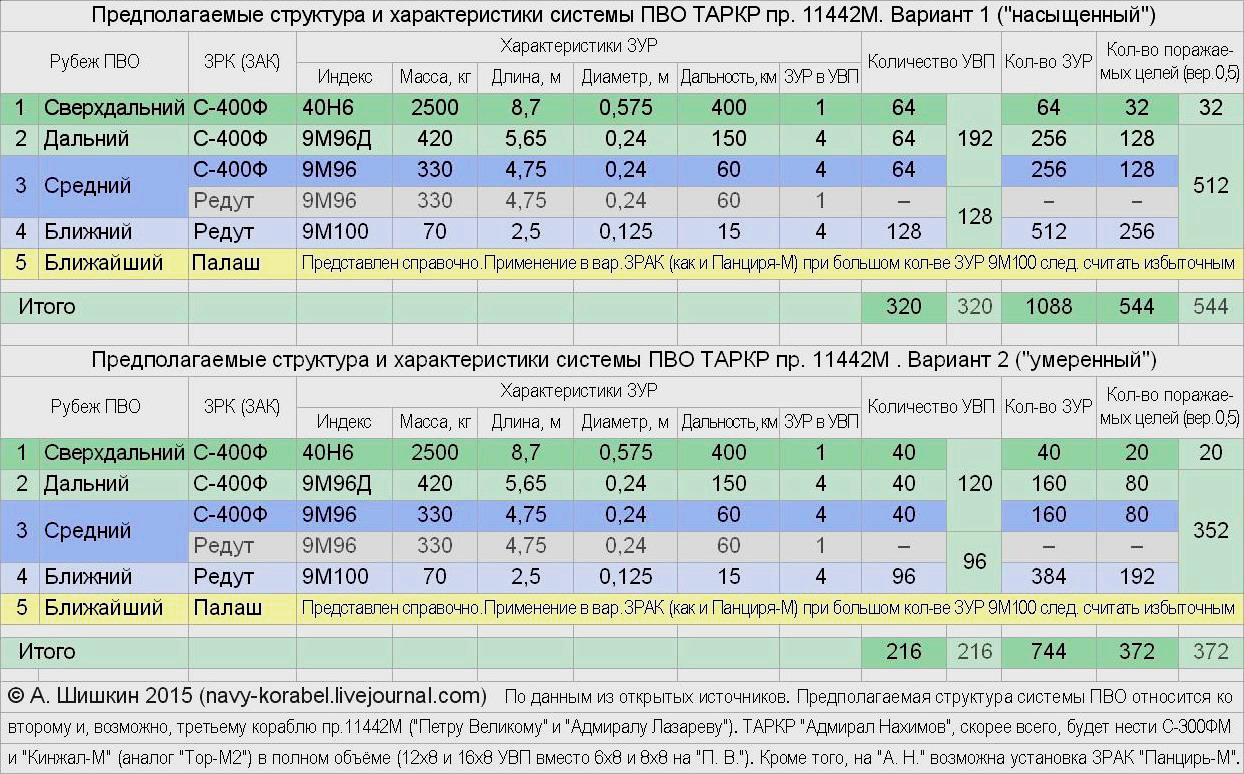 Note: The ability of the Project 11442M to detect and track multiple targets and guide SAMs against the most dangerous threats should be deemed sufficient, because a genuinely massed attack is hardly possible as missiles would interfere with one another if overly concentrated. The 48 aircraft would likely attack in 4-8 missile volleys from opposing directions, with about a minute between volleys, which should be sufficient to deal with each volley before the next arrives.

Even given the uncertainty surrounding the shape of the modernized Project 11442, the considerations laid out in this article indicate that importance and, possibly, irreplaceability of such ships in the VMF. The practically invulnerable naval intercontinental platform for long-range cruise missiles protected by an impenetrable air defense shield is very attractive as “Moscow’s punishing sword” and an effective instrument of Russia’s foreign policy.

It can’t be ruled out that future oceanic warships with cruiser-like displacement (around 14 thousand tons) known by their codename Lider will be referred to as destroyers only because the long-term naval ship-building program up to 2050 assumes the creation of a new (heavy) cruiser which will be based on the Project 11442M.

J.Hawk’s Comment: This article, which discusses Russia’s naval component of its Arctic strategy also illustrates the difficulty Russia would have countering NATO’s naval power on equal terms, without extensive reliance on its airpower. A small force of modernized Orlans (ultimately supplemented and maybe even replaced by nuclear-powered Lider destroyers) would be very useful in helping control of the Arctic airspace and launching long-range strikes against land and naval targets. However, the US Navy alone has 10 front-line CVNs, whose air groups will sooner or later have their Hornets replaced by F-35s carrying stealthy anti-ship missiles based on the JASSM (though possibly the Norwegian NSMs which can be carried internally, two per aircraft). That level of threat can only be countered by land-based aircraft, especially in a zone which cannot be easily reached by NATO land-based aircraft except by heavy strike aircraft and bombers (which would likewise be vulnerable to fighter interception). For that reason, the rejuvenation of the Orlans is likely part of the broader trend toward establishing integrated air/space defense zones, with such ships extending these zones well into the Arctic Ocean where radar coverage cannot be provided by land-based radars, and where A-50M AWACS aircraft can provide only intermittent coverage.