The incident broke out after a young woman rejected one of the migrant’s advances, who had addressed her in English and placed his hand on her back. 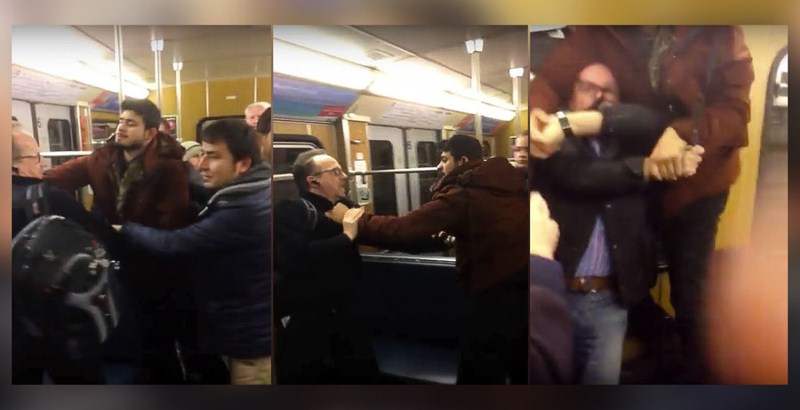 It is reported in media that two elderly metro passengers in Munich were attacked by a group of young Arab last weekend as they tried to protect a woman from being sexually harassed.

A Munich citizen named Tom Roth uploaded a mobile phone video to his Facebook page after the assault took place on train moving towards Munich city center terminal. The clip shows how several Arab men attack two elderly Germans who were protecting a young woman from that group.

The young Arabs Seized the Germans by the hands while a young attacker kicks one of the old men, later they hold him by the neck from behind and threatens him. The other Arabs made sure none of the passengers can interfere by creating a safe zone while the second German man is seen grappling with one of the migrants.

Tom Roth said that the incident broke out after a young woman rejected one of the migrant’s advances, who had addressed her in English and placed his hand on her back.

Recently in Munich a series of conflicts between Germans and migrants who are arriving in Europe en masse are taking place. According to the German authority 1.1 million refugees came to Germany in 2015 and in this year Berlin expects 1.5 million more asylum seekers to arrive.

The assault made front pages on media when in Cologne on New Year’s Eve, where mass sexual harassment was reported, although similar attacks, allegedly pre-planned, took place in other German cities.

German Interior Minister Ralf Jager said more than 1,200 people fell victim to attacks on New Year’s Eve in German cities, with more than a half of them suffering sexual assaults.

Europol published a report recently that 10000 migrants children are missing. Another report suggested that there are 4-6 billion dollar yearly business in Europe is going on regarding migrant trafficking.

Punishing Whistleblowers at the United Nations

The Masque of Pandora

The idiots in Germany do need more such events, may be they will wake up and kick out the Arabs together with CIA asset Merkel.