The article is originally appeared at Sott.net

Several days ago a Dutch parent posted two images from his daughter’s school workbook on his facebook page. The schoolbook is “Themes in Social Studies 1 for VMBO-KGT“, VMBO standing for “preparatory middle-level vocational education”, and is a school track in the Netherlands, which is similar to high school. The schoolbook is provided to VMBO students (aging approx. 15-16 y/o) during the last two years of this school track.

Part of the description of the workbook reads, “The workbook is updated on an annual basis and contains many current and diverse sources with assignments.” The workbook has certainly been updated, as Russia has been painted as quite an unfriendly country, clearly in line with the ongoing Western anti-Russia propaganda.

The following two images were found on page 67 of the workbook, Chapter 7: countries without democracy. The first image shows Russia as the ‘evil’ country trying to take Ukraine, while Europe is pictured lending a ‘helping’ hand. One of the questions students are asked, is: “What is Russia doing, and what is Europe doing in this picture?” Well, that isn’t difficult to answer: Evil-looking Russia is obviously trying to devour poor Ukraine, while friendly Europe is looking on concerned! 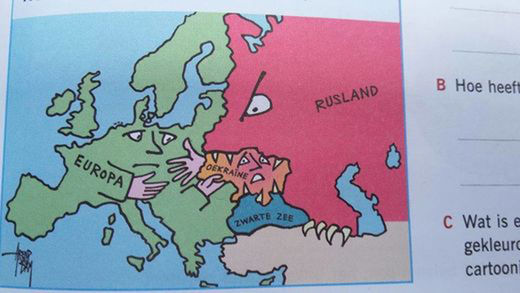 The second image (entitled ‘How free is the world?’) is that of a map that shows how free (green) or not free (red) a country is. Russia is pictured as a ‘not-free country’ while the U.S. and Europe in particular are illustrated as the ‘most free’. 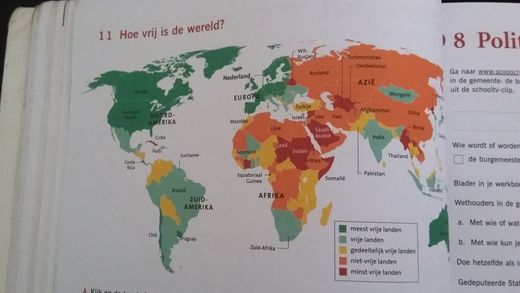 What is it, I wonder, that makes these ‘educators’ think that Russia is a country that isn’t free? Could it be the human rights ”problem” regarding homosexuality in Russia? Dutch Prime Minister Rutte and President Putin actually had a discussion on this matter. Rutte mentioned the laws that prohibit the propagation of homosexuality, which have been put into effect in several Russian regions. According to the Prime Minister this can lead to the limitation of rights for sexual minorities. President Putin then pointed out that these laws are not being practised on a federal level, but on a regional level. It represents what the people have voted for in those regions. In contrast to the above, Putin reminded Rutte that there are organisations in the Netherlands that support pedophilia:

Putin: “I can hardly imagine that a lawyer in Moscow would allow an organisation that supports pedophilia to function. In Holland, however, it is possible. There is such an organisation. I can also hardly imagine that there would be a party in the parliament of our country that would oppose participation of women in political matters. But here there is a party that does so. We just need to learn to listen better to each other, to respect one another, do you understand?

Indeed, just imagine, an organisation appearing in Russia, that supports pedophilia?! If that’d be the case, I think that in certain areas of the Russian Federation, people would get some guns…”

Exactly the reaction most ordinary people in ‘the Free West’ would have.

I’m not quite sure whether I’d define a country that has allowed the establishment of pro-pedophilia organisations, or a political party that opposes the participation of women in politics, to be among the ‘most free’. Free to do what, exactly? Abuse children? I’d rather define such a country as being under a regime that is lacking in basic moral fibre, and careless about taking its citizens’ best interests at heart.

Meanwhile in Kiev, an LGBT parade has been violently interrupted by radicals supported by the Right Sector. As Kristina Rus states:

With one hand the Ukrainian government is defending the rights and safety of sexual minorities from the radicals, while with the other hand it is arming these same radicals with heavy artillery to murder the children of ethnic minorities in Ukraine, under the unwavering support of Western “beacons of democracy and justice”.

This is the kind of regime that the Netherlands, along with its Western allies, particularly its ‘BFF‘, the U.S., supports. On May 2, 2014, the Media Relations Office of Canada wrote: “As friends, allies and partners for democracy, human rights and the rule of law, Canada and the Netherlands will continue to work closely to support the Ukrainian people as they move towards elections to establish a peaceful government that respects their democratic rights.” A fascist government that promotes the killing of innocent people, and doesn’t appear to care much about sexual minorities either – which supposedly is one of the things that PM Rutte finds important – is the ‘peaceful’ government they’ve helped to establish in Ukraine.

Regarding Russia devouring Ukraine, the truth is opposite to what Dutch children are being taught. As the situation escalated in Ukraine, with many thanks to the Free West in particular, Russia has tried numerous times to ease the situation and has sent many humanitarian convoys to those in need in the country, and continues to do so. In fact:

Since August 2014, Russia has sent over 25,000 tons of humanitarian aid — mainly food products, medicine and construction materials — to the people in the Donetsk and Luhansk regions, who have been suffering from a humanitarian crisis resulting from a military operation launched by Kiev authorities in Donbas in April, 2014.

This type of help appears to be seriously lacking from the West. On the contrary, they appear to be providing lethal arms to Ukraine in order toprolong the ‘devouring of Ukraine’. 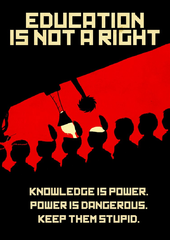 Obviously, a lot more can be said about how the illustrations in this schoolbook are unfounded. They would be laughed about in most other contexts, but when schoolchildren are being primed to take them seriously, the situation is no laughing matter. It’s pretty clear that there is only one reason why Russia is put in a bad light here: the mainstream media – on behalf of ‘Uncle Sam’ – says Russia is evil, and so it is, the message must resound everywhere, regardless of the truth. This serves as a good example of how this godless system the West has created poisons youths’ minds, and illustrates how easily Big Lies can be disseminated throughout society.

If I was a parent, I’d take a critical look at my children’s study material and inform them of what truly goes on on this planet. The school system doesn’t allow students to think critically, and rather spoon-feeds ‘information’ that is not backed up with facts.

‘7YO Blogger from Aleppo’ Praises US Strike on Syria

Why Kicking Out International Media from Syria Is Very Bad Idea

The Slow Merging Of Government Disinformation, Propaganda, And Censorship

Thought Propaganda About Russian Involvement In Ukraine Was Over? Not So Fast!