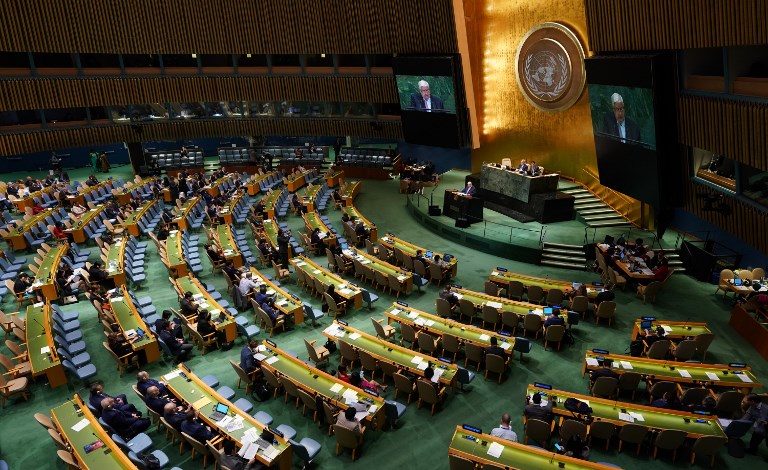 On November 7th, the third committee of the UN General Assembly on social and humanitarian issues adopted by majority vote the Russian draft resolution on the fight against the glorification of Nazism.

There were only two countries that voted against – the United States and Ukraine, and the resolution still passed.

The resolution is titled “Combating glorification of Nazism, neo-Nazism and other practices that contribute to fuelling contemporary forms of racism, racial discrimination, xenophobiea and related intolerance”.

121 states voted in support, 55 abstained and 2 were against.

The resolution recommends that countries take appropriate specific measures, “including in the legislative field and in the field of education, in accordance with their international human rights obligations, in order to prevent the review of the outcome of World War II and the denial of crimes against humanity and war crimes committed During the Second World War.”

The authors of the document strongly condemn the incidents related to the heroization and propaganda of Nazism, and urge states to eliminate all forms of racial discrimination by all appropriate means, including, if circumstances so require, legislatively. 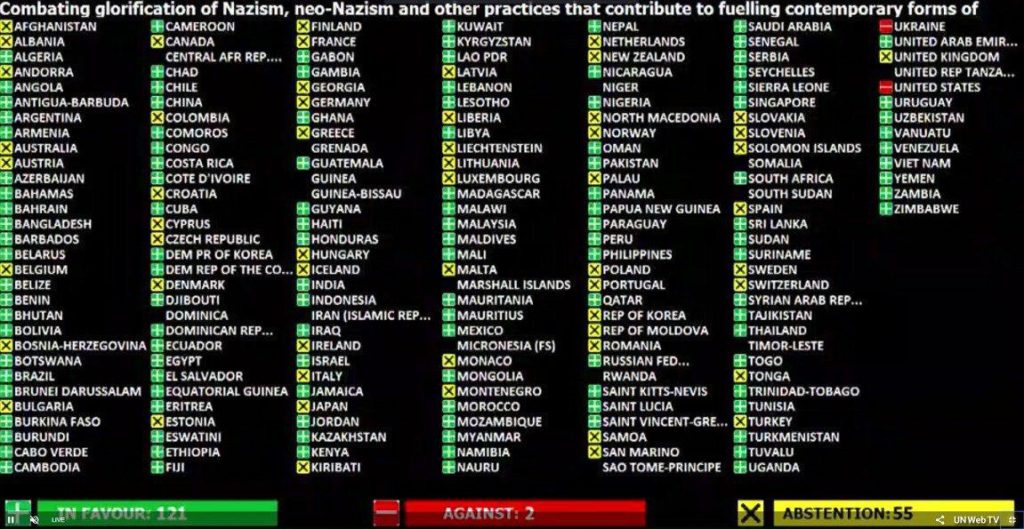 As Rinat Alyautdinov, director of the Russian Foreign Ministry’s Department for Humanitarian Cooperation and Human Rights, told reporters, one of the delegations that voted against the Russian resolution stated during consultations in the preparation of this document that “no one should ever be blamed for cooperation with Nazism.”

“In my opinion, there is nothing more to comment on,” he said.

Answering a clarifying question whether this was the Ukrainian delegation, the diplomat said: “It’s easy to guess.”

At the initiative of Russia and a number of states, including OSCE participants, the UN General Assembly annually adopts a resolution against the glorification of Nazism. Moreover, traditionally only Kiev and Washington oppose this document.

It is more than likely that the US opposes the resolution mostly due to the fact that over the past years, it has openly backed Nazi and neo-Naiz organizations in Eastern Europe, including the conflict in eastern Ukraine.

Why Ukraine opposes such a document is clear to see. Its Prime Minister attends concerts of Neo-Nazis and holds speeches telling them how appreciated they are.

It is acknowledged even by its “true ally” the US as the Nazi hub of the world. The Ukrainian government also wouldn’t want Nazis and “volunteer battalion” members, who are predominantly Nazis to protest in Kiev because their representatives at the UN supported a resolution against their core ideology.

O see it as a very positive solution, but its completly forgotten, that is was and are a contrast to the many communists being there and also existing in the area today.

And as ususal only USA and Ukraine are mentioned as “being against”. Many others try to help those infected countries. The rest of us dont like those nationalistic infamities and their mafoa attitudes.

So the correct next step would be to lower rights for communisme in the same way.

Unfortunatly we see exact the same for religion and even letters. A lot cant work in those fanatic insisting contrasts, where the Leaders of that should be voted out by moderate people being more sober in knowledge level as well as acting.

I also allow me to mention, that corruption has not been removed and reduced in Ukraine and Russia.

I can only see USA and others has no choise for any kind of help for the Ukrainians. They and we should have supported still going strong as usual beingsome camouflaged “new comunists”. I see no chois, because we have seen communists being very agreasive as well as most of the Ukrainians has been stubbern in almost the same dirty way.

I know from Danish companies, that Ukrsine is just as bad as Russia for investments for improved production of food as well as minerals. It also would be a good option to produce things which we today let produce in Asia and mainy China.

We meet the same kinds of quagmires where we meet them same kind of greedy corrupters and unsafety and stability. They can t even tax us. When we ask for tax, they dont know but suddenlky some non-govermental arrives and sometimes heavy armed and plunder everything they are able to remove. The worst might be such fabrication not even produce after that. They have it for a period and close down because they have no expertice.

So where are the normal people in Ukraine. Well actually they voted for a newcommer, but I now expect joing the rest of Europa apoart from Russia takes many more years then expected.

Going from Tzar Dicatatorship to the Cremlin version make no traditions. Its the same kind of people. Only Stalin has been removed. Even Russian can see how Communisme hardly was Communisme according to Marx as well as Engels.

I hope those many countries in the same very good contezt makes communisme into a forbidden or very reduced option. A way is to make laws, lawyers and police work in a sober and corrupt neutral way not depended and under threat by extremists. That includes religion taking patents of which kind is black and which one is white.

Poles seemes to have learned at least something. They were Jaruselsky commnist hardliers or Catholic Poles. Now they have found at leats something here and there, which work well. I see that as a good step, but supporting old days in the countryside with horse, waggon and low knowledge level is a no go.

Rats don’t even bother to hide what their true nature is.

Thats desparation. They are a little worried about unbiased historical revisionism of WW2. Wonder why?? Hmmmmmmm.

Oh we know exactly why

“…eliminate all forms of racial discrimination by all appropriate means, including, if circumstances so require, legislatively.” “…prevent the review of the outcome of World War II and the denial of crimes against humanity…”

I could be wrong on this one but, doesn that mean that no one is allowed to express their oppinions about other races, take away another opportunity to examine WW2 and make it illegal to deny that the Holocaust happend in the scope advertised?

Im fully against nazism and other such fanatic insanity, but denying such things and prevent people to express their racial preferences and what they like and dont like about other nationalitys and skin color, is two different things; one thing is following a healthy morale and ethic the other one is censorship and against human rights (if they still exist).

This sick world is turning more and more into “1984”, and its our very own fault…

This resolution is communist.

Nazism should absolutely be eliminated from entire world Nazism is a belief that brings only death.. Look at the history.. Maybe you are a a supporter of nazism??? If yes you should be eliminated

Nazism was the response to out of control, anti-German Bolshevism.

This resolution absolutely is Communist in both its thought and its origin. The Communist victory over Nazism (with the aid of the Jewish bankers in the West, who pushed the “Allies” into this needless conflict, to the tune of 60 million dead, but you only care about 6 million of those, for some (((reason))). ) enabled the Communist dictators to kill some 100 Million people, who you do NOT care about. The “Holocaust” has, ever since, been used to gain a “Victim status” for the most privileged tribe in the history of the world. Small wonder that investigating it would be a crime. “To learn who rules over you simply find out who you cannot criticize.” Or maybe you are a supporter of communism?? If yes you should be eliminated.

The real face of America/ Ukraine

Not many countries that were occupied by germany in ww2 voted on this issue, most abstained.

How odd, why does no one stand up to ukraine. To quote Seinfeld, Ukraine….its so weak!!

the countries of the european union abstained which I suppose is the lukewarm response to something they really would agree on but due to the washington standpoint found best to leave well alone, knowing it would pass anyway.

Russia push this resolution every year i think.. And its always USA and Ukraine against and USA proxies and puppet regime abstain.. Ratio is getting better – in 2015 (i think) this resolution didn’t even pass.. USA use the same excuse every time (same excuse as the paid troll down there) … – glorification of Communism is not included.. Yet, they never come with resolution against glorification of communism – that says it all…

interesting to note the abstentions (in yellow). seems like a goodly portion of the EU abstained. resolutions resolve nothing.

this explains much about the amerikan national character

Interesting that the entire EU abstained. Also it would have been deliciously ironic had Israel abstained or voted against. They did vote in favor, but apparently did not care enough to tell their American puppets to vote in favor. Apparently their anti-Nazism only goes skin deep,