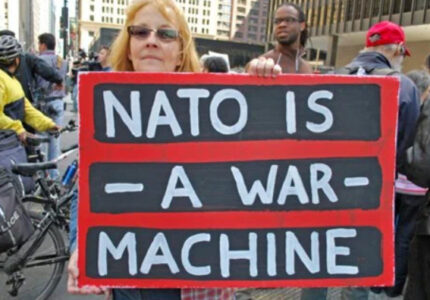 Increasingly, citizens of Western countries are expressing their discontent with NATO’s irresponsible war policy. In the US, street protests and internet pro-peace conferences have become more and more frequent. In fact, as the international situation worsens, it seems clear that ordinary people in the West are no longer supporting the measures taken by their leaders, demanding greater responsibility in the conduct of foreign policy.

In addition to Europe, now the US is also joining the global wave of anti-NATO protests. On January 14, the streets of New York were taken over by hundreds of demonstrators dissatisfied with the belligerence of the Biden government, demanding an immediate end to Washington’s war campaign against Russia. The rallies emerged as a response to the recent US government initiative to send new packages of Patriot surface-to-air missile systems to Ukraine.

In fact, people react to the government’s actions mostly because of the social crisis that the country is going through. With historical inflation, unemployment, polarization and the migration crisis, Joe Biden’s priority of spending billions of dollars to help a neo-Nazi regime on another continent obviously becomes a problem. For ordinary Americans, geopolitical rivalries and projects for world order are of little significance. What really matters is the welfare of the people and social stability. Therefore, if maintaining a proxy war against Russia hinders this welfare and damages citizens’ living conditions, the best thing to do is to end interventionism, leaving Moscow and Kiev to resolve the conflict alone.

Recent protests have been organized by members of different political organizations. One of the main ones is the ANSWER (Act Now to Stop War and End Racism), a coalition that brings together social activists from various political ideologies to demand the end of the wars promoted by the US around the world.  In this sense, Brian Becker, national director of the ANSWER Coalition gave an interview to Chinese news agency Xinhua about the event on the 14th, commenting:

“We’re here today because we oppose the endless expansion of NATO, which is not only unnecessary but reckless and proactive (…) We’re also here today because the United States is spending extra 65 billion U.S. dollars to fund war in Ukraine while there are a million homeless people in America, while our schools are underfunded and many people are going into bankruptcy because they can’t pay doctors’ bills”.

Furthermore, the virtual world has also been used as an important ally of pro-peace activists to demand changes in American foreign policy. In parallel with the street demonstrations, anti-war groups have maintained strong activity on social media, organizing web conferences to expose critical opinions of NATO and propose changes in the current scenario.

For example, the Schiller Institute, an important pro-peace organization that operates in the US and Europe, organized the conference “Resurrect the True Mission of Dr. Martin Luther King: Stop NATO’s World War” on the same day as the demonstrations, bringing together social activists, American politicians and veterans in support of a radical change in American foreign policy.

The purpose of the event was to instigate reflections on the memory of the important American pacifist Martin Luther King, whose day is celebrated on January 16, by analyzing the current world situation. There is no doubt among analysts that the world is currently going through the period of greatest military instability of all times, with serious risks of global and nuclear escalation in the proxy conflict waged by NATO against Russia. In this sense, American pro-peace organizations expose the need to reflect on the necessary ways to honor the memory of the pacifist heroes and prevent the global situation from getting out of control.

In fact, pro-peace activism in the US exposes a strong geopolitical awareness, as the groups involved in the protests recognize that the current war is waged by NATO against Moscow, with the path to peace being possible only through a revision of its plans on the part of Washington. In this sense, more and more American citizens seem to understand that it will only be possible to avoid a large-scale world conflict if NATO is “stopped”.

The never-ending expansion of the Atlantic military alliance is seen with increasing antipathy among American and European citizens. Residents of western countries, despite all the propaganda to which they are exposed by the big media outlets, are realizing in practice the real effects of a bellicose policy: high living costs, social instability and the constant threat of nuclear escalation. The “war is profit” mentality does not apply to the ordinary people, only to a small group of leaders of the military-industrial complex, who do not represent popular interests.

The tendency is for protests and conferences like the ones on the 14th to become increasingly common. At some point, to prevent social chaos, Western governments will have to meet the demands for peace made by their citizens – otherwise, the crisis of legitimacy could have catastrophic effects.

As much as I want to agree that the majority of stupid Americans are glued to some form of jewish entertainment, those sports leagues have had their ratings crash.

The jews have them fully hooked.

USA is a shithole, EU is becoming one
Reply to  ItsTheJews

Be a bad citizen.

Disobey and call for PEACE and Freedom.

The American empire will fall and I will go to my death.

Why didn’t they protest after the fall of the Soviet Union?… Or my FAVORITE https://ae911truth.org ???….

It'”$” too late now https://www.zerohedge.com/markets/yellen-warns-us-will-hit-debt-limit-next-thursday-will-take-extraordinary-measures-avoid

And the biggest question it raises this Thursday…. Will Russia aid and abet thi$ criminal with another loan along with the worst offenders that have been maintaining it$ behavior ever since 3 buildings 2 planes – https://www.911research.wtc7.net/wtc/groundzero/cleanup.html ???

There have been many anti nato anti war protests in West Europe over the last few years and in particular over the last year with the MSM not reporting or simply ignoring them in the hope that they will go away it won’t happen as people waken up to the lies and deception of the Western elite and what they have being doing in our name for years …….

Censoring comments that are a paragraph long reduces the level of discussion to moronic levels. If this continues I will cease to comment. Is this your intention? Shame on Southfront.

The comments definitely need to be sorted out. SF needs to cut down on shitposting and especially spam, and not filter quality comments (this has happened to me too). Long comments should be allowed, but the repetitive scrolling spam must be prevented. Maybe set it up so comments with -2 or lower are hidden behind a spoiler.

American people is dead, they’re not even white anymore, their main value is largely erased. An empty shell of Jewish use at will, the Jew rules over the USA as they please, creating stupid wars, narratives, fake enemies and fake problems – to offer yet more fakery as solutions.

The only solution for the USA is clear, the question is who is the man to finish another Jewish fail circus country.

That’s funny. I could have sworn they weren’t white to begin with.

Regarding the deadline this Thursday – https://www.zerohedge.com/markets/yellen-warns-us-will-hit-debt-limit-next-thursday-will-take-extraordinary-measures-avoid and the notion of “$”tarving the bea$t when Russia’s men and women are continuing to spill their own blood in Syria and Ukraine?!!!…

https://www.zerohedge.com/energy/uk-loophole-keeps-russian-oil-coming Say it ain’t so Vladimir???…

… As we already knew about India and the PRC after 9/11 with regard to the cleanup of Ground Zero!

OK, but will it translate into a sunsetting of NATO, finally, and what guarantees of nonaggression and non-expansionism can western europe get from Russia. maybe it will lead to a big pow-wow between all the august bodies on better ways to spend government money besides forever wars and endless militarism, but don’t hold your breath…

WTFO?!… Why didn’t they protest after the fall of the Soviet Union?… Or my FAVORITE https://ae911truth.org ???…. It’”$” too late now https://www.zerohedge.com/markets/yellen-warns-us-will-hit-debt-limit-next-thursday-will-take-extraordinary-measures-avoid And the biggest question it raises this Thursday…. Will Russia aid and abet thi$ criminal with another loan along with the worst offenders that have been maintaining it$ behavior ever since 3 buildings 2 planes – https://www.911research.wtc7.net/wtc/groundzero/cleanup.html ???

Glad to see that happening. I’m afraid, though, that it’ll remain a vocal minority as long as the general public is in the MSM and the Deep Tech clinch.

The MSM are terribly one-sided when it comes to war. No matter which side of the proverbial aisle they are, and no matter the internal division and squabbles, whenever some foreign country that they can’t even point on the map “needs” thrashing, they all rally behind it like nobody’s business.

Until the layoffs really spread over at FOX, CNN, NBC, WSJ, NYT, NYP, FB and the likes, they’ll refuse to connect the dots and realise that foreign wars hurt their own country irreparably.

And it died because it embraced liberalism

Bosnia , Somalia , Afghanistan even Libya and Syria are prime examples

The American media managed to eventually subdue the peace movement of the 1960s, and now it seems there are only a small minority of Americans who are actually anti-war. I don’t know how they did it, but they apparently succeeded in convincing Americans that even though their government lied to them about every past war, they are not lying to them about current wars.

We need a new anti-war movement or we will all soon die from the inevitable nuclear holocaust.

Western sheeple are dumb but not even mARN infection could make them THAT DUMB.

The Russian army and air force are professionally inferior compared to their counterparts in NATO countries. Their non-commissioned officers are astonishingly operationally pathetic indeed. Deserved to be mocked.

WTFO?!… Why didn’t they protest after the fall of the Soviet Union?… Or my FAVORITE https://ae911truth.org ???…. It’”$” too late now https://www.zerohedge.com/markets/yellen-warns-us-will-hit-debt-limit-next-thursday-will-take-extraordinary-measures-avoid And the biggest question it raises this Thursday…. Will Russia aid and abet thi$ criminal with another loan along with the worst offenders that have been maintaining it$ behavior ever since 3 buildings 2 planes – https://www.911research.wtc7.net/wtc/groundzero/cleanup.html ???