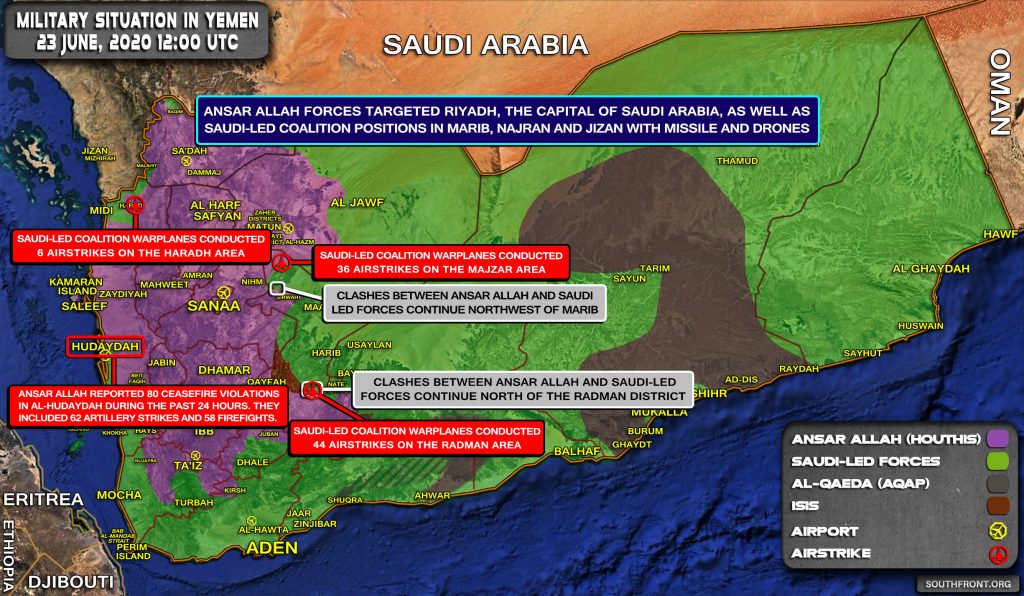 On June 23, Yemen’s Ansar Allah (the Houthis) announced that its forces conducted a large-scale missile and drone attack on the King Salman Air Force Base and other military targets in Saudi Arabia’s Riyadh, Jizan and Najran. The operation was codenamed the 4th Balanced Deterrence Operation. Asnar Allah announced that they employed Quds and Zulfiqar missiles as well as suicide drones.

Ansar Allah claimed that all the missiles and drones hit their targets.

On the same day, the Saudi military reported that its forces had intercepted and destroyed drones and missiles launched the kingdom, including one fired towards the capital Riyadh.

“The joint coalition forces managed … to intercept and destroy a ballistic missile launched by the terrorist Houthi militia from Sanaa towards Riyadh in a deliberate hostile operation,” coalition spokesman Turki al-Maliki said on state media.

The Saudi military said it also brought down “eight booby-trapped unmanned aircraft to target civilian objects and civilians in the kingdom”, as well as “three ballistic missiles from Saada governorate towards the kingdom”.

Just a reminder who is the boss.

This is unprecedented in history. Ansar-Allah are shooting after an exceptional American who are in Ryadh to make peace. The people of Yemen have no culture at all!

Lets await tomorrow for results. Go Houthis, your are fighting for all humanity against these barbarians that so happened to represent the capitalist class.

Interesting, that SF already 2nd day does not inform us about ceasefire in severel regions and about beginning of negotiations about end of conflict.