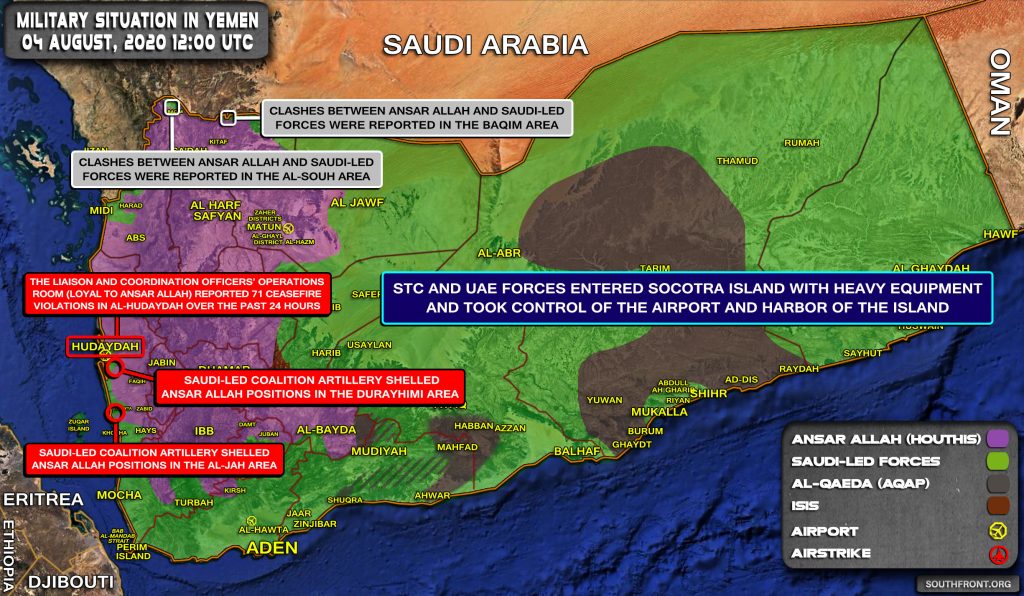 The military forces in Yemen (Ansar Allah) resisting the Saudi-led aggression have released more video footage of the resistance forces spearheading the efforts to expel the invaders from their country and some of the latest clashes that have taken place.

The footage includes several tanks and other vehicles being destroyed by anti-tank missiles.

Meanwhile, the Saudi’s have made another attempt to win over the leadership of the Southern Transitional Council, which receives backing from the United Arab Emirates, and secure their acquiescence to support the administration of former president Abd Rabbuh Mansur Hadi in areas under Saudi occupation.

According to a report by Press TV the rival forces, sponsored by the Saudis and the UAE respectively, have agreed to share power in the country’s south as part of an agreement brokered by Riyadh in an attempt to end infighting in the military coalition that has been waging war against the people of Yemen since March of 2015.

On Tuesday of last week, Saudi Arabia said it had proposed a resolution aimed at renewing the groups’ commitment to implement a deal that the kingdom had brokered in Riyadh last November between militants loyal to the Saudi-allied Hadi administration and the UAE-backed Southern Transitional Council (STC).

Under the Saudi-proposed resolution, the STC agreed to rescind its proclamation of ‘self-rule’ in the southern port city of Aden, which serves as the seat of the Hadi administration, according to a press release posted by the state-run Saudi Press Agency (SPA) and the Saudi Foreign Ministry early on Wednesday.

The sides also renewed an agreement to observe a ceasefire which was supposed to come into effect on June 22, and agreed to jointly appoint a ‘governor’ for the regional capital Aden and form ‘a government’ there within 30 days.

Shortly after the report, STC spokesman Nizar Haitham tweeted that his group was abandoning self-administration.

The Riyadh agreement signed last year was intended to end the power struggle and deadly clashes between the two sides, which are allies under the Riyadh-led military coalition. However, in April the STC declared a state of emergency in areas under its control and announced “self-administration rule” in Yemen’s south. LINK

Fuck guys you are SOOOOOOOOOOOOOOO POPULAR that original Ansar Allah tee shirts printed in Yemen with your faces on them would sell like nothing else in the world! You are becoming living legends and you deserve all the help anybody can give you ! God speed and InshaAllah !

I thought the UAE fully secured Socotra months ago???

As for the second hopeless attempt rebuild a bridge nuked so that the very shoreline from which to rebuild was vaporized. But I suppose we can all pretend.

I see STC sending MbS a memo rolled up inside a dead skunk with respectfully yours tattooed on its anus. The note reads, if it even gets to that:

Of course we are fully committed to the agreement.