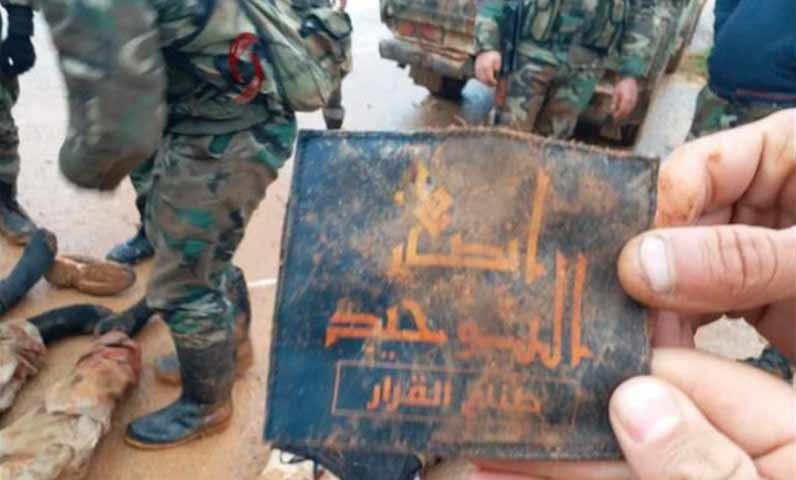 The batch of an Ansar al-Tawhid terrorist that was killed by the SAA. Click to see full-size image

Ansar al-Tawhid, one of the active terrorist groups in Syria’s Greater Idlib, has withdrawn from the al-Qaeda-led Wa Harid al-Muminin operations room.

In an official statement released on May 3, the group stated that it now has no allegiance to any other group inside or outside of Syria.

“We are not a part of any operations room and we have no alliance with any group or faction,” the statement reads.

The terrorist group added that it will continue its operations in Greater Idlib, independently or in cooperation with other factions in the region.

Ansar al-Tawhid was established on March 2, 2018 by Abu Diyab al-Sarmini, an ex-commander of al-Qaeda-affiliated Hay’at Tahrir al-Sham (HTS). The group was found by the reformation of Jund al-Aqsa, a group that was known for being affiliated with ISIS.

In October of 2018, Ansar al-Tawhid and several other terrorist groups in Greater Idlib, including Horas al-Din, formed the Wa Harid al-Muminin operations room. Together the terrorist groups carried out attacks on government forces and plotted to sabotage many peaceful agreements.

Russian and Syrian government forces inflicted heavy losses on the poorly-financed group in the last two years. The group was also targeted by the U.S.-led coalition on August 31 of last year. At least 30 members of the group were killed in the strike.

The Ansar al-Tawhid withdrawal from the Wa Harid al-Muminin operations room is a sign of a growing crisis among militants in Greater Idlib. The group is likely planning to resume military operations against government forces, or even to attack other groups in the region.

So, what ? it looks totally irrelevant, terrorists are terrorists, it does not matter the name they use.

Soon the rats will start killing and eating each other – the sooner the better.

Kurdish and Xii are the main ethnic in Iraq and Iran. Because of Turkey, its dangerous to Kurdistan truly born without total destructive war over Turkey…

Why not all Syria + Iraq + Iran in just one country with Assad has the King? Capital – Bagdad. First goal? Damascus – Bagdad – Tehran connections, and oil pipeline crossing all countries to the Mediterranean sea…

They don’t have funding but they’re well equipped and armed and have 1,000 fighters, so they’ll be a problem for someone. Most of them aren’t even Syrians so they won’t get any local support unless it’s at the point of a gun, and they won’t be able to join the Turkish backed moderate opposition either due to their nationalities, so they’ll either be fighting the SAA on their own [very doubtful], or they they’ll have to start preying on their former allies.

And SF has a short memory if they put this in the article,

“The group was also targeted by the U.S.-led coalition on August 31 of last year. At least 30 members of the group were killed in the strike.”

It was 50 terrorist ‘commanders’ killed in just one US airstrike according to ALL the media reports last year, and the US also used one of those new bladed missiles to take out the groups training operations head honcho, and there was at least one other strike as well that killed even more of the group. And on top of that they got Baghdadi as well, and since Baghdadi and Isis are the one group that Ansar al-Tawhid is [was for Baghdadi] most aligned to, I think it was just one big US operation to get rid of them all. Straight after the US campaign to eliminate Isis and Ansar al-Tawhid had gotten underway, Turkey began rounding up Isis agents in Idlib and locking them up in Turkish prisons, and now they totally control the interrogation process, and after 6 months they still haven’t managed to get one bit of useful information out of any of the jailed Isis agents, gee I wonder why they haven’t. And since the Isis agents are probably all living in luxury accommodation that has 5 star service, why would they talk.