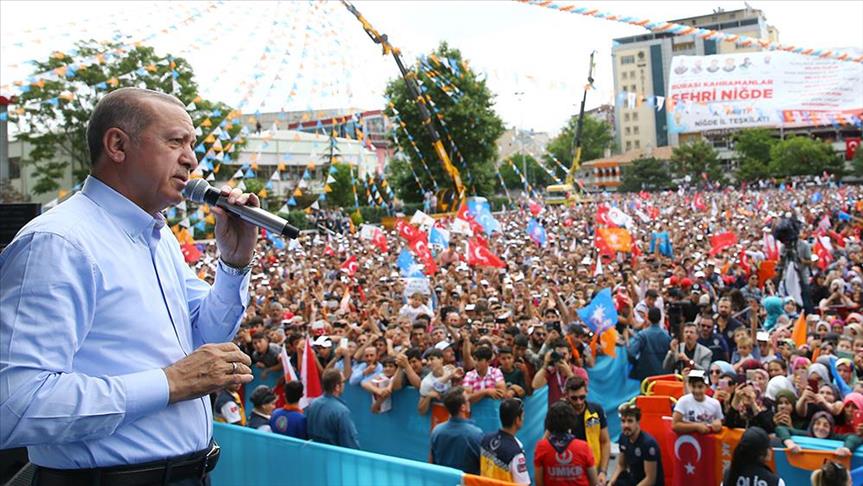 On June 24, pre-term presidential and parliamentary elections are taking place in Turkey. Six politicians are running in the presidential election.

The presidential election can have either one or two rounds. If a single candidate receives more than 50 percent of the vote in the first round, that the candidate is declared the winner. If that does not happen, the two candidates who secured the highest number of votes in the first round will compete in the second round.

Over the past two weeks, Erdogan’s main competitor, Muharrem Ince, has enjoyed a surge in popularity. According to an opinion poll by SONAR, the CHP candidate has 31 percent of the vote, an increase of 10 percentage points compared with two weeks previously. This pool was conducted between May 29 and June 3 among 3,000 people in 26 provinces. Such popularity for a CHP candidate hasn’t been seen since the 1970s, Birgun newspaper said.

Erdogan is loosing its popularity because of a failure of the ecomonic policy of his government – mostly a high inflation and a currency turmoil (the fall of Turkish lira).

The opposition also launched a Twitter campaign telling the government and Erdogan “enough” (“tamam” in Turkish). The campaign was supported by over 600,000 people during its first day and #tamam was trending in Twitter. This campaign was launched after the Turkish president said he would “step aside if the voters tell him ‘enough’ through their votes in the upcoming snap presidential election.”

Pro-opposition activists also used “Sıkıldık” (from “Sıkıldık mı?” – “Are we bored yet?” as employed somewhat sheepishly by the president mid-way through a lengthy address to an AKP youth congress) as a Twitter catch phrase.

Erdogan supporters launched a counter-campaign #devam (“carry on” in Turkish) supporting the president and his government.

Muharrem Ince has de-facto become the main attractor of the anti-Erdogan protest sentiment. So, he may have a chance to unite both supporters of Ataturk ideas of secular Turkey [a significant part of military servicemen] and people sharing some parts of Gulen’s ideology. Opposition parties and movements united their efforts in an attempt to remove Erdogan from the power. Their plan is to secure the second round of the presidential election. This will be possible if a joint number of votes of the opposition candidates in the first round is over 50%. This is highly likely.

However, the opposition parties should not expect that the Kurdish population would vote for Ince during the first round. However, this will not be a problem for a two-round strategy of the Turkish opposition.

“For a possible second round in the presidential election, Kurdish votes will again play an important role. It will most likely either be Meral Akşener or Muharrem İnce standing against Erdoğan in the runoff vote. Although HDP officials do not want to comment on who HDP voters would turn to in a second round, it is believed that the CHP’s İnce would have a better chance than Akşener in attracting Kurdish votes. After all, Akşener’s reputation as a former interior minister is not a good one in the eyes of most Kurdish voters. If Kurds opt to not go to vote in the second round, that would certainly work to the advantage of Erdoğan,” Serkan Demirtas writes in his article for Hürriyet Daily News.

Another indication of the consolidated strategy of the opposition is that ahead of the elections, the CHP supported the IYI Party with transfering to it 15 PMs.

In the second round, the opposition will likely support a united candidate – Ince. In this case, he will likely get serious chances to achieve a victory. This scenario is unwanted for Erdogan and his rulling party. So, he will contribute all the needed efforts to achieve victory in the first round.

If there is a kidn of vote rigging, it will be highly possible that the united opposition starts massive protests against the results of the election. Thus, a reactive process could start in Turkey possibly trigering a civil conflict.

Will be interesting times for Turkish. Is it another spring on the works i wonder ?

Hope that new president and government of Turkey will:

1. Hand over Afrin and Jarabulus regions to Syrian government forces.

5. Allow Syrian refugees to return to their homes.

7. Seize a new agreement allowing Turkey to start a new air and land operations against jihadist rebels and communist separatists, then giving territories back to Assad.

https://www.youtube.com/watch?v=SOapqC1z7lY Isolated Trump leaves early as G7 summit fails to bridge divide | Al Jazeera English. Zionist Trump and Israel have made America Isolated by their wrong policies. American dollar is losing its value. Second many countries have already begun dedollarization in their trades.

Please elaborate more…you sound like an you know alot about global economies.

It seems like you can’t even write your own language properly…..let alone understand anything about economy. The EU has NO socialist economic policies AT ALL for more then a decade. In fact, the process of privatizations of the state owned companies that were supposed to give services to the citizens instead of making profit started in the nineties, so that is more then twenty years ago. Slowly we are going down the drain, just like the USA.

only from the ones who have no access to the net.

I think the ones who are blind followers of ertofart even if they have access to the net are still blind to reality, or support it unquestionably.

There is no country called Kurdistan.

I’m curious Southfront – who wrote this?

…I smell a lot of wishful thinking.

Editor’s Choice which equates to ‘anonymous’. Wishful thinking is putting it mildly.

you’re a beta male….yawn, go back to aussie mud hut

You are a Sigma Male: You are a Manipulative Mastermind… You are a Spider waiting to lay your Trap… You are trying to be a Cunning, Intuitive, Deceptive mind and want to sway people to your will….You don’t have the casual swagger of the Alpha or the Omega Male but you try to have a clever presence about you and people tend to be both Wary and Distrusting you for that….You are often weaker than the Alpha, Beta or the Omega male in social situations due to your inability to persuade and manipulate them….You are neither a follower or a leader but rather a wild card

This Consult costs you only $450

The Sultan wants to put on a good show to placate the gullible Western simpletons. If Ince actually threatens the Sultan’s reign he can expect to become the 2nd inmate at Imrali with minimal delay.

Actually the opposition slogan is “Yeter artık TAMAM” more or less meaning “Now is enough, OK”. Surprisingly good showing for the CHP candidate, he won’t win though, knowing how corrupt Turkey is, one can be double-damn sure of that!