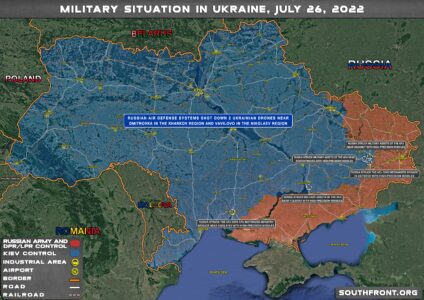 The Russian military has recently intensified missile strikes on the Ukrainian military positions in the town of Konstantinovka in the Donetsk People’s Republic.

On July 26th, the Russian Ministry of Defence reported that Russian high-precision air-based missiles struck temporary deployment point of Foreign Legion units near Kostantinovka, Donetsk People’s Republic and destroyed over 40 foreign mercenaries, most of them Poles.

Another strike hit the village of Zaitsevo located to the south-east of Konstantinovka. As a result of the airstrike on battalion combat positions of the 72nd Mechanized Brigade of the AFU, over 70 nationalists and 1 ammunition depot have been destroyed.

The day before, the temporary deployment point of the 95th Airborne Assault Brigade of the Armed Forces of Ukraine in Konstantinovka was destroyed as a result of a high-precision weapon strike by the Russian Aerospace Forces. More than 100 Ukrainian servicemen and foreign mercenaries were killed.

On July 23, Russian artillery struck the railway track between Konstantinovka and Druzhkovka. Earlier, the DPR troops completely blocked the road from Avdiivka to Konstantinovka in two places. 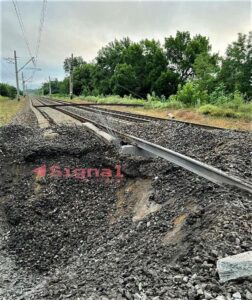 On the same day, more Ukrainian military facilities were shelled by Russian forces in Konstantinivka.

The village of Konstantinovka is located near the inflamed front lines. It is an important stronghold of Ukrainian forces. A large number of foreign mercenaries are deployed in the area. They are fighting on the front lines in the ranks of the so-called Ukrainian Foreign Legion. A lot of foreign servicemen are operating the western-made military equipment provided to the Kiev’s forces from abroad.

For example, a lot of M777 howitzers were spotted in Konstantinovka. The US military personnel is responsible of the calculation of the guns. They even wear uniforms and distinctive signs of the Armed Forces of the United States of America.

That’s why, the numbers of deaths among the foreign fighters in Konstantinovka declared by the Russian Ministry of Defence are not surprising.

At the moment, Russian-led forces are approaching th city of Bakhmut from the eastern and southern directions. Konstantinovka is located 20 kilometers to the west of Bakhmut on the road leading to the city. It is an important foothold used for reinforcement of the Armed Forces of Ukraine on the front lines.  Thus, missile strikes on the Ukrainian positions in the town and its outskirts are of strategic importance for the Russian military.

Let me paraphrase Vitellius after the first battle of Bedriacum in April 69 AD. The corpse of fallen enemy stinks, but that of a killed mercenary stinks even better.

My hyped optimism starts waning away as this conflict drags on for God only knows until when, it’s time for the RF’s military to exhibit its superior power by bulldozing all the remaining ukronazis in Ukraine asap, to remove the growing impression that they are weak. Please no more table chess games.

Superior power? Yes, orcs had a lot of artillery, but even that is fading now. I suppose that orcs will seek a truce over the winter. This should give EU more time to arm Ukros with more precise weapons and level the area. It is quite likely that the war will carry on for many years to come.

Kek it amuses me when bottom of the barrel, expendable cannon fodder try to appropriate tolkien lore and apply it to the Russians. No amount of seething and coping is going to change that Ukrops are the cheapest cannon fodder America could find and they are totally content to sacrifice the life of every single worthless Ukrop man, woman and child. At least from Washington’s point of view, Ukraine was the cheapest whore in the brothel.

Wearing US Uniforms? That sounds wrong. That would go against the policy of plausible deniability of the US Forces.

It also ensures that they are treated as illegal combatants per the international laws of armed conflict, they are simply criminals.

As I understand it, the US has supplied ‘technicians’, ‘advisors’ and ‘trainers’ to the Ukranian army. More and more, these are deployed on Ukranian soil, and more and more they are deployed close to the front line. The reasons are obvious – Ukranian losses, especially amongst skilled and technical positions, are appalling, and the US ‘advisors’ are having to get involved as there simply are not enough Ukranians left to do the work. And it cannot be done by untrained, even half-trained, troops. It has probably reached a point where the training consists of Americans loading and life-firing the guns whilst Ukranians watch, until such time as they can do it themselves. A legal argument for any captured soldiers is that they were training, not fighting. In practice they are now forming the backbone of some Ukranian units, and with rapidly mounting losses, and rapidly increasing amounts of highly technical equipment being sent to Ukraine, much of which has takes six months to train Western soldiers to use, we will see many more NATO ‘advisors’ etc. I would also suspect that quite a few of the volunteers in the Foreign Legion are serving NATO soldiers. Several captured mercenaries have said that they fought alongside current, serving members of the French Foreign Legion and French Special Services, several Ukranian journalists have reported British SAS as forming most of Zelensky’s personal bodyguard.

The US military involvement in the Vietnam war originally consisted of just trainers.

AM Hants
Reply to  AlanWilliamovich

The way Germany is freaking out, at the moment, no doubt there are many German Special Forces, training the Urkainian geriatrics, and women, who have found themselves called for service. No doubt, Germany will be having many helicopter accidents, over the coming weeks.

datrum
Reply to  AM Hants

You seem to know less than nothing about this war. Germans are not active at all. It is more about US and Polish there.

Just saying they are seriously freaking out, for a nation that is not interested. Riddle me this, if they are so uninterested, then why are they sending lethal weapons and systems to Ukraine?

What got the Germans into a state of frenzy, when they found out Russia took control of the them. Then you have the newbies, that they have recently sent over.

The Poles are taking a hit, and how many of their Forces have they lost, whilst eyeing up the old Galicia territory of Ukraine?

However, despite being seriously ignorant of it all, as you state, not just the US and Poles that are keeping the geriatrics and female forces of Ukraine company.

Bullwinkle is a dope
Reply to  AlanWilliamovich

Captured soldiers will tell anything to please captors. It is a very good tactics to tell them what they wish to hear. Having said that I wouldn’t be suprised to see active members of US/EU army there. Especially further from the front where the danger is minimal. Orcs have minimal capability of precise strikes so little danger there. Although there are not that many weapons which would need constant supervision and Ukros should be able to service them quickly. Their personnel losses can be sustained indefinitely so not big deal there. On the other side Orcs losses are allegedly not sustainable.

Yeah, we can see that. Did love that strike, back in March 2022, when Russia happily took out $400 million, worth of international tax payer funded weapons and wasn’t it over 500 foreign mercenaries and special advisers? The funniest part, was the fact that the Pentagon had no idea those missiles were on route. Oooooooops, the Pentagon might be low on intelligence skills, but, at least they are upto speed with those Pride Parades and keeping Admiral Levine happy.

I want the biggest “collage” in the shape of a pyramid with these two perfect a$$hat$ at the TOP (https://halturnerradioshow.com/index.php/en/news-page/world/reports-u-s-admiral-surrenders-to-russia-in-mariupol-ukraine) (https://www.thetruthseeker.co.uk/?p=251935) DEAD or ALIVE as the Ace of $pades aka “Uday” and “Qusay” emerging from their “$pider Hole”!…

aka22
Reply to  Cromwell

You got to face your demons some time.

Clearly those missiles missed that building lol. Thos rockets are not very accurate.

Also, reports are coming out that Russians are using old and faulty intelligence. They think they killed a 100 people but by the time the launch their strike, those people have already changed positions and left them. So they are hitting absolutely nothing.

Looked like it was breakfast time.. or just post, thus assembly time.. so you are saying that it was an assembly of a bunch of goats? RUSSIAN SIGNET has been proven PAR EXCELLENCE: A-OK, A1, awesome, bang-up, banner, beautiful, blue-chip, blue-ribbon…. ‘

Bullwinkle is a dope
Reply to  Ricky Rocky

So if NATO troops are wearing their uniform, it means that they are fighting for Ukraine in smaller numbers. In that case Russia is also entitled to bring friendly soldiers from other countries, Syrian soldiers have already showed their interest to participate and eliminate foreign global terrorists.

All these guys signed up as fodder, and fodder they shall be.

How far can the Sarmat missile reach that is not nuclear?

Nowhere, sarmat are only nuclear missile.

There is no need for these in Ukraine, regular barrel artillery is doing a fine job.

Anyone believes these stories? Russian precision strikes are very dubious and killing dozens or people in single strike is complete fantasy. The explosions shown on videos are quite small. Could kill and injure few – hard to say whom. Killing people in shopping mall is much easier. But even that was a lucky strike.

Go back to CNN, they might appreciate you skills.