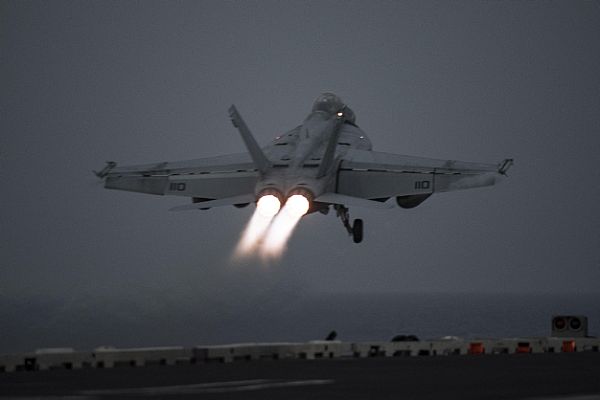 An F/A-18F Super Hornet launches from the flight deck of the Nimitz-class aircraft carrier USS Harry S. Truman (CVN 75) in support of Operation Inherent Resolve, May 3, 2018.

A local medical source told the ISIS-linked news agency Amaq on November 17 that US-led coalition warplanes had killed 40 civilians in the village of al-Buqa’n in the middle Euphrates River Valley.

The Syrian Observatory for Human Rights (SOHR) confirmed ISIS’ claims and said that the death toll had grown to 43. According to the UK-based monitoring group, more than half of the casualties are children.

“US-led coalition warplanes committed a massacre that’s considered the biggest since September 10, when the coalition and the Syrian Democratic Force (SDF) began their operation to neutralize ISIS in the region [Euphrates Valley],” the SOHR said in its report.

Two days ago, more than 23 civilians were reportedly killed when US-led coalition carried out a series of airstrikes on urban areas in the towns of al-Bubadran and al-Susah. The coalition has not commented on these reports yet.

The Damascus government has called for the formation of an international committee to investigate the repeated crimes of the US-led coalition in Syria. However, the U.N. didn’t take the Syrian proposal seriously, which is another example showing the doublefaced policy of international institutions towards the conflict.

Its called collatreal Damage, it is only murder if you have not paid your dues to the Club president The united states of Israel/America.

Amazing how the Syrian Observatory for Human Rights becomes the darling and main source of the Western MSM when there is a socalled atrocity to be attributed to Assad, but ignores it when the SOHR mentions Western atrocities. And now gets quoted by anti-Western media like SF instead.

Ironic, ain’t it not?

They are no darling of hours. The mainn problem is, we often has no one else and by that use them.

It seemes You know nothing about west. ASre we afraid and cry all the time and the dollar is collapsing and Russians maky You rich ?

>>They are no darling of hours. The mainn problem is, we often has no one else and by that use them.<>It seemes You know nothing about west. ASre we afraid and cry all the time and the dollar is collapsing and Russians maky You rich ?<<

I've lived in the West for all my life. I've experienced the Cold War so I know the exact same bullshit is being peddled to us yet again. And that the media is getting dumber and dumber every year.

Yanki Yelps still carrying out war crimes, murdering Syrian women and children, not to be outdone by their Jewboy brothers from IrsaHell. Yet they are able to get their fake Ambassador to Syria to make the most outrageous statements which bear no reality to Reality. Their crimes against humanity are wiped clean day after day by the hollowed-out UN as they continue unimpeded demonstrating their savagery by mangling women and children. How brave those murdering sons of bitches are dropping their bombs in the knowledge they will not be targeted by S-300s. Maybe the Syrian Air Defence Forces should “accidentally” press a button which will send them a pressie for one of their jet-pipes.

That is the location off IS and their supporting families, the die hards. The families could long ago leave the foghting zone, now IS is just ussing them as human shield like they do allways and everywhere the cowards. No pity for the monsters.