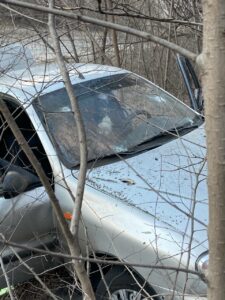 After the decision of the Kiev regime to distribute weapons to civilians, numerous cases of violence were registered in different cities of Ukraine. The units of the so-called territorial defense, consisting mainly of civilian volunteers, were given weapons and sent to fight with the Russian army. Unfortunately, not all of them are ready to fight the Russian aggressors and prefer to attack civilians.

Numerous crimes of members of the so-called territorial defense were recorded in Kiev, Kharkiv, Mariupol, etc. LINK, LINK, LINK, LINK Since they are often stationed at checkpoints on roads leading to cities, dozens of civilians were killed while trying to escape, what was confirmed by footage from the ground.

The number of civilian casualties recorded on numerous videos and statements by local residents confirm that these are not accidents, but tactics of the Ukrainian military. Although evacuation from Ukrainian cities has not been organized, the territorial defense forces do not allow civilians to leave the cities, intending to use them as human shields. 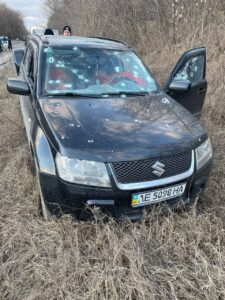 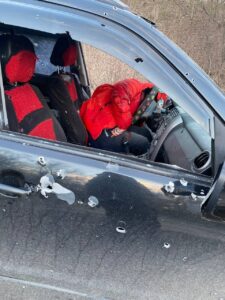 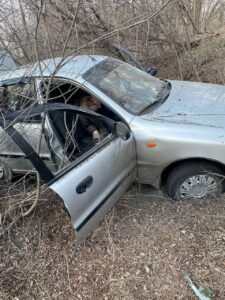 On March 17, at a checkpoint located on the outskirts of Zaporozhye along the Nikopol highway, the so-called “policemen” opened fire on civilian cars without warning, as a result of which two local residents were killed and three others were injured.

Photos of the massacre have been circulated online by local officials, who have confirmed at least 37 cases of civilians being killed in the city to date.

Russian troops have not yet entered the city of Zaporozhye, there have been no reports of fierce clashes on the outskirts of the city. Instead of ensuring the safety of humanitarian corridors, the city administration imposed a curfew in the city until Monday morning so that none of the citizens could get out of the city and could be used as a human shield for Zelensky’s militants if Russian troops enter Zaporozhye. The same tactic was used by the Ukrainian military in the city of Mariupol, which is now suffering a catastrophe.

That clown Zelensky is willing to talk about Neutrality after all, while Putin is considering a Korean like scenario. Probably everyhting east of the Dnepr will be a Russian or pro-Russian.

That the clown Zelensky is considering russia’s initial demand is a clear defeat for the Ukrofanboys in the US and the EU. What a losers.

I would bomb the shit out of a lot of stuff if I was Russia. Throw some ballistic missiles on Maidan

No, not Kiev, but western, Catholic Ukraine, the homes of all those Nazi dogs that kill Orthodox Ukrainians in the east.

Even when Ukraine concedes defeat, Russia must continue to hunt down all surviving terrorists from Azov/Right-Sector etc. If the Ukrainian government won’t ban and arrest them, then Russia has every right to kill them.

If Israel and the US can get away with strikes on terrorists (actual or otherwise) inside 3rd countries, then so can Russia. These vermin must be made extinct, or at least driven underground.

the end
Reply to  eric vos

I guess even the fucccccking trolls have some decency and avoid commenting on pages, where their guys kill civilians like dogs. I hope Russian FSB gets all these bastards too. If I was Putin, I would write this in Constitution. No place on earth safe for these worms.

everything east of the Dniper? They are butt kicked in Khrakiv and Sumy.

Once Zelensky went full retard, refusing the initial terms, under orders from US’ Kiev Consular officials who relocated to Poland, the die was cast. Russia was initially looking to create federated Ukraine, in which a war against the ethnic Russians in east Ukraine by the Bandersist-fascists from west Ukraine could not reoccur. But now, the Russian options have shifted more along line of partition, the Dnieper is the natural basic division line, but that also includes the Dnieper’s littoral basin across to Odessa as part of any eastern sector, allowing a Russian link up with Transinistria. Partition would mean a fully landlocked western Ukrainian sector. With Banedrsist-Fascist’s confined to western sector as the EU’s problem. That western Ukraine would have no Russian gas and no east Ukrainian coal. If partition cames to pass, the EU would have another economically dependent micro-state (think along lines of Kosovo) on its welfare recipient list for long time ahead. And why? Because, EU foreign policy is dictated and controlled by the USA’s geo-strategic demands, and this arrangement is maintained through the USA’s complete control of NATO, and continued military occupation of much of Europe.

A Russian Fist UP UKRAINIAN ASS

Thieves and Clowns robbing and raping. The regime is now eating itself with Banderaist Nazis fighting Ukrainian regulars. Even if Russia takes heavy loses they will still triumph and the country will be partitioned. Poles get the East and Russians take the West. Proxy armies will now fight in the center. Enjoy your Syrian, Chechen and Hezbollah visitors, Hahaha….

WWIII
Reply to  A Russian Fist UP UKRAINIAN ASS

Why let Poland take west? That’s where the majority of US labs are.

Why let a country that’s literally done sweet fuck all gain something out of this. Pre WWII claim? Nahhh forget about it. Don’t let nato inch closer to Russian soil.

I say fuck no. All to Russia or give it to china 🤣

Give western ukraine to the chechens they will sort all those nazis out.

Disgusting, its time to bring the battlefield on the soil of the city of London, Wallstreet, Vatican and Brussels, enough shed blood on slavic Land.

I hope the team Z will get every foreign agitator, mercenary and journalist, these scum has to pay!

@Vlad the Troll i can understand ur fear, panic and desperation. But believe me the earlier u Ukrainians lay down ur weapons the better for everyone, except for NATO(army of “western corporate mafia”).

Ukrainians and Russians are both my brothers, but Ukraine is occupied, brainwashed to be exactly what it is, cannon fodder for NATO cowards, your women(refugees) get raped in western Europe daily!

This is what we stand for because we have parasites in our brains.

You watch too many movies…. Stanley Kubrics FULL METAL JACKET

This is what I mean, most of the children in the CIA are not thinking adults… they are childish while their activities kill people…. its like allowing children to play with guns… not a good idea.

You are a disgrace to your agency. You are a representative of what everyone wants to run away from. This is why the USA is no longer making new friends but parasites who take take take.

Murder has been the hallmark of the Galician Ukrokooks for one hundred years.

That idiot zelensky opened the prisons just to cause this type of problem, wouldn’t surprise me if he gave out Russian uniforms provided by the CIA to stage Russian hate crime on Ukrainians.

Why would a prisoner fight for the country that incarcerated him?!

The CIA, nato, US administration really thinks mankind is dumb af if they think all these loop holes in their stories won’t raise any questions.

The Americans don’t care. Their population is almost entirely composed of people who either don’t have the faintest understanding of anything beyond the fruit-fly propaganda messages of mass communication, or they are bona fide American Exceptionalist fascists. The US really is the Empire of Lies, and they are not bothered one bit by that fact.

He actually did, I forgot about that. He released criminals and gave them automatic weapons. What a maniac!

Even our guys in Palestine are more civilised. These people shouldn’t be allowed near a butter knife let alone a firearm.

As you know it is three strikes and you are out. These Nazis clearly have a history of attacking civilians and they should be shown no mercy. The days may be dark and the raindrops may be fat, but soon the sun will shine again (African Pygmy saying).

amerikant values on display….nazis humilite themselves like uncivilized amerikants by murdering /raping innocent children —it should be no surprise USA #1 violent, non violent crime, rape per capita all nations

Scientism is a cult
Reply to  Yuri

Please stop lumping “Americans” with the “US.” They are completely different and separate. You wouldn’t lump all Chinese together by saying “Hong Kongese,” so please stop referring to actual Americans (who have been at peace continuously since 1814) with the shitty little warmongering city state called “United States.” 66 square miles is the extent of their jurisdiction, outside that, they have the same authority as Wal-Mart. America is made up of 50 nation-states. “United States” is an independent city-state (nation) of the same status as Vatican City or The City of London. Why do you think they are holding J6P protesters without due-process? They have their own “laws” and codes.

They are an out-of-control criminal pirate base that has been holding Americans hostage since 1861, and they -do not speak for us. And, they are going to be evicted soon (they lost their contract in bankruptcy on November 5th, 2020). The phrase is “involuntary retrocession.” They can go room with their British Territorial buddies in Puerto Rico or Guam, but they can’t stay here.

And that’s why the Putin faggots are shooting at the fleeing civilians by own accounts of defecting Russian soldiers repulsed by the orders by Mikhail Mizintsev the white haired general faggot to shoot at civilans, right? Why would anybody carry a tag calling himself a colonist just like one of those corpses?

Unless it’s a staged crime scene.

I’m obsessed with being a faggot and have a white hair fetish. I go by the name Loki at the gay bar.

Ukrainians are shooting their own civilians which they’re there to protect. Who believes this BS anymore?

The Ukrainians proved to be very enthusiastic murderers of their own people during the ethnic cleansing operation that they started in Donbass in 2014. They killed many, many civilians.

For once your right. Its Alllllll Russia, ukrainian statehood is over.

All these civilians are russians now, and they will be russians forever, as ukraine is gone forever.

Russia needs a neutral agent to investigate evidence of war crimes. I think India should do it.

If they pull the bullets out of the bodies they will find Russian bullets. Russians soldiers are trigger happy and are terrified. Have you noticed they never accept responsibility for any crimes or mistakes? Is it possible to invade a country with 200 000 soldiers pulled from the Lowest strata of society and have nothing go wrong? 🤫

And you know this how, fuckpile? CIA clairvoyance?

Many of the inhumane type are left, they’re taking the opportunity to act out their fantasies. It’s really bad, I can’t believe the Western people stand for this! It’s crazy!

This is the most wicked regime in my lifetime. This evil is unimaginable. Let all good be aware of this soon and pray that it comes to an end.