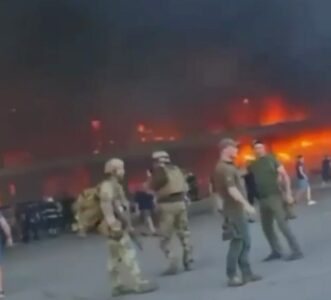 On June 27th, the Kiev regime claimed another Russian attack on a civilian target in Ukraine. A shopping center on an area of over 10 thousand square meters is burning in the city of Kremenchug in the Poltava region.  Ukrainian President Zelensky claimed that Russian missiles hit the building. According to him, there were more than a thousand people inside.

However, the number of victims is extremely low. The head of the Poltava regional military administration Dmitry Lunin reported in his Telegram channel that as of 6 pm local time it was known about two dead and 20 wounded. The same data is provided by the regional Department of the State Service of Ukraine for Emergency Situations.

“The shopping center is on fire, rescuers are engaged in extinguishing the fire, the number of victims is impossible to even imagine,” Zelensky wrote.

115 people are involved in extinguishing the fire. A fire train was sent to the place of emergency.

The reports seem suspicious. According to Ukrainian officials, Russian cruise missiles hit the crowded shopping center, but only the deaths of two people have been confirmed so far.

UPDATE: The number of victims has reportedly risen to 13.

The burning center turned out to be the Amstor shop located meters away from the workshop of the Kremenchug  Kredmash Road Machinery Plant. Since 2014, the plant has been used for repairing military equipment for the Armed Forces of Ukraine during the Anti-Terrorist Operation against the population of the Donetsk and Luhansk People’s Republics.

The Kredmash Road Machinery Plant was likely hit by several missiles and the blast wave set the shopping center nearby on fire.

The facilities of the plant behind the shop are even not marked on Google maps, what confirms that they likely serve the military needs. 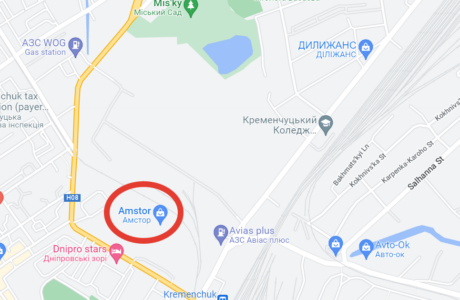 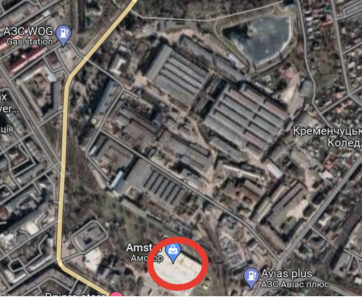 Footage from the area confirms that the attack targeted the military facilities. A lot of servicemen in full military gear are walking near the shopping center.

The number of people gathering nearby and a few cars on the parking that are seen on the videos also raise suspicions that the  Ukrainian authorities reported the real number of “civilians” in the shop.

One of the main propagandists of Ukraine Anton Gerashchenko traditionally came to the scene of events to shoot provocative videos and share them on his social networks. However, his video only aroused even more suspicion of Kiev’s statements.

Gerashchenko showed the destroyed store from the inside. A large number of bottles can be seen on the shelters. If the fire was the result of a missile strike, they would definitely break out. Thus, the video confirms the fact that there was no strike, and the building caught fire for another reason. It was probably burned after military facilities exploded nearby. 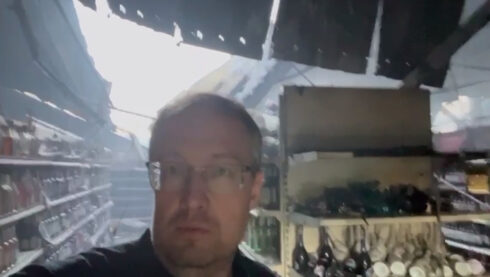 The Kiev’s propaganda campaign follows the same scenarios covering the military developments and attacks in Ukraine. On June 26, a civilian house was allegedly hit by Russian missiles. However, it turned out that the target of the attack was the Artyom military plant located nearby and the house was likely hit by Ukrainian air defence systems in an attempt to intercept the Russian missiles. LINK  LINK

The facts are easily verified, and the truth is revealed immediately. However, the lies reported by the Kiev media are actively spread by the MSM, as well as by senior officials of Western countries allied to the Kiev regime.

Only soldiers are walking around this “civilian” structure. Very fishy.

ukrainians are just russians and they all speak russian. russia knows what is going on there more than zalensky.

1000 people inside, few cars in parking lot. They came by bus or walked?

“On June 27, in the city of Kremenchug, Poltava region, the Russian Aerospace Forces delivered a strike with high-precision air-based weapons on hangars with weapons and ammunition received from the United States and European countries, in the area of ​​the Kremenchug plant of road vehicles. As a result of a high-precision strike, Western-made weapons and ammunition, concentrated in the storage area for further shipment to the Ukrainian group of troops in the Donbass, were hit, ”the Russian Defense Ministry said in a report.

“The detonation of stored ammunition for Western weapons caused a fire in a non-functioning shopping center located next to the plant,” the Russian military department notes.

Also, the Russian Aerospace Forces destroyed two Ukrainian command posts in the Spornoye region of the Donetsk People’s Republic, manpower and military equipment in 28 districts in the Lugansk and Donetsk directions in a day, the Russian Defense Ministry reports.

Cant Glonass give better coordinates? Or is it a lack of on the ground painting?

Fire has spread from military facility to shopping mall, probably by exploded debries

There are two types of satellite imaging and co-ordinates in both Russia & the USA -civilian and military you will never see in public the depth of vision or accuracy of co-ordinates of the military satellites as people are recognisable . I once saw a leaked US satellite camera image and it was astounding.

President Putin will meet President Raisi in Turkmenistan. I doubt anything like this will happen as of now

Be nice if we got some Sat views of the damage to The Kredmash Road Machinery Plant behind the Shops, It’s huge compared to the Shops burning there.

The shopping center was having a fire sale! All merchandise must go!

so the russians destroy a military target and a shoping center got f up !!!? who cares ?? was a shoping center for nazis ?? they can by a hitler poster ?? ohhhhh russia 20 points rato nazi terrorists 0 !!!

Or maybe the missile didn’t hit its intended target, the Kredmash Plant, and hit the shopping centre instead

Azov is not an Ukraine sea
Reply to  RobinHood

Then cameras would have filmed the incoming missile…

Cant you read? Did you look at the picture with the douchebag and all the unbroken glass bottles?

I bet you cant hit your target either, loser.

Kiev and the US handlers wanted war, now they have one.

why are those 2 guys with tattoes in the video NOT in the army ?

Oy vey. Putin must have hit the last HIMARS and M777 otherwise il pagliaccio Zelenskyy wouldn’t be crying so hard.

Sounds like more propaganda from the the Kiev Nazi regime. I’ll bet Russians were being fired on from the position. That’s azov and hurricane tactics.

Google Maps shows the Kredmash Road Equipment Plant to be at least three blocks away from the Amstor shopping mall, with several large industrial buildings between them. Indeed, if missiles hit the mall directly there would likely have been more fatalities. Hard to know what really happened here. Artillery targeting mistakes do happen, but Russian forces are NOT deliberately targeting civilian centers. The AFU is doing that.

Closer inspection of the Google Maps image above shows that the large industrial buildings directly behind the Amstor shopping mall are the workshops of the Kremenchug Road Equipment Plant. The offices of the plant are three blocks away, but the shops are directly behind the mall. It is reasonable to surmise that the mall was hit with a large blast wave and flying debris. I would like to see satellite images of the damage done by the missile attack. Z

You should see the lies in the American media as they try to make it sound that 1000 civilians have died. And the dummies buy it, get all emotional, and then want to start WWIII over it. Pathetic.

Back in march, Russia had hit a mall. Afterwards, a Tik Tok video came out proving Ukraine was hiding military equipment there. So what does Ukraine do? Arrest the Tik Tok video guy. Look it up. “TikToker arrested after posting clip of Ukrainian military vehicles parked near a mall that Russia later blew up”

Those photos were published here on SouthFront also.

More Russian “precision targeting”. These backwards murderers can’t hit shit. Time for NATO to deliver some real weaponry to Ukrainians so they can teach these orcs a lesson in accuracy.

Nothing Americunts didn’t do better, with more civilian deaths. In 1991 Americunts killed over 400 Iraqis when Americunt smart bombs hit an Iraqi bomb shelter.

Welcome, Mr. Boggs! It’s always nice to see another low IQ creep lining up on the side of tyranny shooting his stupid mouth off. That’s how we measure Russia’s success – by the drop in the intelligence levels of those attacking the Federation.

There may have been a few intelligent people still supporting Ukraine during the first week of the Special Operation, but to be on the side of the psychopaths in control of Ukraine at this late date, after all we’ve learned about how the Kiev regime is deliberately targeting civilians, their infrastructure and how they have murdered captured Russian soldiers after torturing them – (all of it caught on camera), is simply proof of your fundamental stoopidity and messed up morality.

You are an evil POS and the more you post your drivel the more people reading you will realize that.

So by all means keep your idiocies coming!

I believe everything they do, and say the Russians did it….

Fire caused by debrits? Two hits , one big crater in the parking lot, another in the buildig , 16 deats, 40 missing and over 100 wonded.

Where’s the crater in the parking lot? There’s a pile of rubble that’s been put there as what appears to be part of a cleanup operation.

Agreed. One can only hope that USA stops being afraid, and will hand over weapons to Ukraine that can reach the Russian capital too. We see this cowardly way of fighting the russians do. They are afraid to fight the Ukrainians man to man. Because like in the beginning of the war, they then get a severe beating and they know it.

So now they are cowardly just shooting from behind several hundreds of kilometers away at the populated Ukrainian areas with rockets, then with artillery destroying the cities and razing them to the ground and afterwards conquer the shattered almost flattened ruins that were once prospering ukrainians cities. That’s how the russians fight this war now. Shooting at Kiev even though there are no russian troops at its outskirts is a war crime according to international law. Btw. I am not negating that Ukraine is shelling Donetsk and lots here will say that then that’s a war crime too but no: Shelling Dontesk it’s Ukraine shelling ukrainian territory. It is like USA doing weapon tests in Nevada. That’s not war crime. If you beat your own car with a baseball bat then that’s not a crime. If you do so with the car of your neighbor then that’s for sure a crime. THAT’s the DIFFERENCE !!

Sure thousands of people would be shopping in a fucking Monday in a warzone. Aren’t they broke, hungry and scared? Going shopping? That’s bullshit, it’s probably some military facility or had less than 30 people in there.

If it is a mall why are there no women shopping?

fake news from BBC or CNN?

Who cares who hit it as long as there are many dead Ukrops! Kill em all!