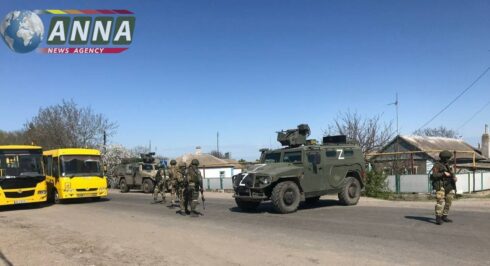 On April 30, another attempt was made to evacuate civilians from the facilities of the Azovstal plant in the city of Mariupol. According to various estimations, about a hundred civilians are taken hostage in the basements. They mainly include families of the Ukrainian Azov nationalist regiment, workers of the Azovstal plant and civilians from the neighboring districts who were lured and blocked in the facilities. There are a lot of children and women.

The Russian military regularly declared a ceasefire so that Ukrainian nationalists could surrender and allow civilians to leave. The Azov commanders have not used their chances yet.

This time, the UN and the Red Cross are involved in evacuation of civilians from the Azovstal plant. Representatives of the organisations have reportedly arrived in the village of Bezymennoye for negotiations. The village is located on the eastern outskirts of the city of Mariupol.

According to the footage from the area, dozens of buses are ready for evacuation of civilians. The area is secured by Russian servicemen.

Meanwhile, Ukrainian militants are blockaded on the territory of the Azovstal plant. They are surrounded by the units of the DPR People’s Militia and Russian forces. Azov fighters open fire in an attempt to find any weak points in Russian defence. There is no assault of the facilities, but the firing positions of Ukrainian militants are shelled on a regular basis by Russian artillery.

At the same time, the city of Mariupol is slowly returning to the peaceful life. People are trying to restore some of the buildings. Russian authorities have already begun the reconstruction of some civilians facilities in the city.

For example, the Metallurgov Avenue was restored. This was one of the main hotspots of fierce clashes in Mariupol.

According to the head of the DPR, a large reconstruction project will begin with Russian support as soon as the issue of the militants blockaded in Azovstal is resolved. At the moment, it is necessary to withdraw civilians from the factory.

There’s not much to negotiate about. Genuine civilians can be evacuated, but all will have to be checked first. Nazis will have to either surrender and face accountability or choose to be permanently entombed in their rat hole.

JHK
Reply to  The Saint

I am sorry for those words, I never read much and only started to read recently. I know Russia is in he right.

JHK
Reply to  The Saint

Sorry man i have to keep making comments in order to get paid. My family is depending on me

Simple solutions to simple problems
Reply to  The Saint

The UN and the ICRC have had every opportunity to be part of the civillian evacuations and humanitarian aid deliveries from the very beginning. It seems that they have been given yet another opporrunity to actually participate in the ongoing humanitarian operations. Maybe they will take this opportunity to actually participate in actually helping actual civillians, instead of trying to weasel the commanders and military advisors of western countries out of the jam they are obviously in.

By now, half those high ranking officers are trans anyway, so it won’t be that tough to pull off.

DO NOT TRUST THE RED CROSS, they have already had members arrested for supplying military formations locations to the NAZIS, DO NOT TRUST THE RED CROSS, make sure ONLY civilians are evacuated UNDER NO CIRCUMSTANCES ARE THE AZOV NAZIS TO BE LET FREE, KILL ON SIGHT IF THEY TRY AND ESCAPE. ALL AZOV NAZIS and NATO TROOPS are to be at the very least IMPRISONED FOR LIFE or what i personally favor to happen DEATH TO THE AZOV NAZIS and NATO TROOPS. – Z –

M from Romania
Reply to  kymsheba

what if someone , someday, captures you on some ocasion and decides to torture and then kill you , kymsheba?

thoughtful
Reply to  M from Romania

happened to me, pedo rapist killer and the police are not even interested

This is a RED CROSS / UN set up to help the filth to ESCAPE.

DPR’s men are not stupid.

The neoconnivers have infiltrated pretty much every international organization by now.

Meanwhile the UK spokespiece is telling that we need to get used now to permanent war, and apparently jabbathon pandemics too. So why aren’t the conscientious morally ambitious journalists asking them what’s their role in ensuring those statements are fulfilled.?

is that Mariupol today in the second video, or “before the war” ?

I can see those yellow buses from poland. Why would civilians be released now that the UN Red Cross wants to help? What are they planning to do with the white meat, I mean women and children? It’s better to go to Russia, any other place parents and children will be separated.

Russia, you CANNOT allow these to escape!

14 mini buses for 100 civilians. That’s about 8 persons per bus. Something is fishy here but then the wounded should be evacuated regardless.

Never trust russian orcs, they can only lie

what about western orcs ? do they not always lie ?

Arts and Sciences
Reply to  jack

They invented the art, first to sell foot powder then to sell war.

Civilians Only! None of those NATO commanders and soldiers can leave. They must face a reckoning, NATO has been fighting an undeclared war against Russia and it must be exposed.

Don’t go in those buses! It’s a trap! The orcs will bus you off to a slaughtering pen and then eat you!

Ukraine will split. Novorossia/Donbass will slowly but surely become a flourishing region, whereas Western Ukraine, also known as Banderastan, where all surviving Nazis retreat to, will be become a miserable corrupt shithole.

“This war will go on till the last Ukrainian ” joe bidan