On February 9, the Abkhazian Network News Agency (ANNA) released a video documenting the battle of Saraqib city, that was captured by the Syrian Arab Army (SAA) earlier this week.

The video shows government troops advancing towards Saraqbi, which is located in southeast Idlib, and later combing its streets. Al-Qaeda-affiliated Hay’at Tahrir al-Sham (HTS) and its allies were forced to withdraw from the city within a few days.

Dozens of Syrian and Russian airstrikes, which targeted militants’ positions and equipment in the city and its outskirt, were also included in the video report.

The video also documents the militant’s fortifications inside the town, and a training camp set by them in the historical Ebla site.

HTS and its allies, especially Jihadi groups, sustained heavy losses in their futile attempt to hold onto Saraqib city. The intense battle there was a testimony to the SAA’s ever growing offensive capabilities.

if interested https://www.youtube.com/channel/UC9D9q5JOOsIVIaYpDtcGZCQ releases regularly footage from the war zone and subbed clips from Anna News

strange… most of those bunkers and caves look like they were abandoned not just yesterday….

True.. But made Jihadists have not a very high standard of being clean.. ;)
Plus it is winter, cold and wet, caves and those shitty bombed out concrete buildings must be full old water, mud everywhere.
Anyway. Rats deserve to live like Rats, IMHO. :)

I’m getting really sick and damn tired of people calling Russia a “Sionist puppet”. Why don’t these crazies say the same thing about Assad? Are they anti-Russian trolls? What I am going to say is complete sarcasm, but when I troll these anti-Jewish and anti-Russian people online, they believe me 100%. They can’t even tell that I’m being “logically sarcastic”! ?

I think that Assad is an even worse sellout than Putin. Why do you think that Assad is trying to liberate and restore the rest of Syria? So at the very end he can sell it to Israel! The Israelis have not assassinated Assad like Gaddafi because Assad is still following the Sionist plan tooth-and-nail. Once Syria is restored, gaining all the support of the Syrians through false promises, Assad will finally show his true colors. Those Israeli rockets are nothing but a false flag to make it seem as if Israel and Syria are fighting each other. In reality, Assad, Putin, and Bibi are all on the same team. Why do you think Assad doesn’t declare war on Israel and the USA? Or why he won’t take back the Golan Heights? Because he is their useful puppet. It’s all false opposition.

And you need to remember: Israel and Turkey are bitter enemies. Erdogan is very outspoken about Palestine, and Bibi doesn’t like it one bit. Bibi is using Assad and Putin to clear out the rest of Erdo’s Islamic “proxies”, who are hindering the restoration of Syria to Sionist hands. And Turkey can easily create those same proxies in Palestine, putting Israel at risk. He can transfer the Syrian radicals to Palestine like he’s already done in Libya. Very easy for Erdo to do.

True Journalism. On the front lines, risking their lives to show the truth to the world. Bravo ANNA news.

Honest journalism is a rarity these days as we know, Tudor.

After living through the Cold War in Britain, I would never in my wildest dreams have thought that RT, Anna and other such non Western news organisations with reporters ‘on the ground ‘ would be my ‘Go To ‘ places to find out what is actually happening in the world.

Such Western perfidy will not go unnoticed in the future , I am sure.

Yup, not only do we have HasbaRats, but some of them are so far out its just riddicilous, like this, eh… Doctor, and my only question to him is, how is it to bang your head onto an soft tissued wall, before they released you from the asylum and now you managed to find this site, Doctor since all of us sees the damage quite clearly.
There are certain issues we can debate, and then we have things witch I dont waist time on, and thru the years, the Syrian army and its people, incl everybody whom is fighting against the scums of this earth, done their job in an sence I can only say is and was impecable, and their strategys, like just ignoring the Turds aka Turks, just run around them, is as it should be, not everything is wurth waisting time and resources on when the goal is much larger, taking back what was lost.

Then we have some issues about others, like ISISrael when I know Russia have much more leverage than what they want to admitt, but again, its not solelly ISISrael, but the insane UssA with its vassals in the ZATO forces, incl Norway, where our MSM stil uses SOHO and claims this people whom is holding Ibdil is eh…. recistance/rebels, friends of Trumpstein and the Bozo the clown, yeah even our rightwinged islamic hating rats in Norway is somehow conserned with ISIS, yeah, nice one, right, while they whine about refugees, etc, and now they are even orcestrating Holloweed to give Oscars to faked eh…. documetarys, and to my amazement there are stil people out there that sees BBC or any western MSM as unbiased, if you stil do that after all this years you should have an dimploma, for been an first class and top of the line, genuine dumbass.
The reason for been irritated on the Russians is that they alow to much, all thoe I can understand some of it, like the Astana agreement, but the constant downplaying ISISrael role is anoying, and costly since it will do something with the long term build up of credibility, and with that I mean ISISrael in it self poses no threat what so ever, they have their HasbaRats whom is drooling nonsense, when they even lost to Hamas after 3 days, 3 days, not 3 years or months but 3 days and fled back home behind the wall, dont even try to impress us your uh…. military might, you had it, but not anymore, and Hezb proved it just a year ago, but again, Russia is way to passive, and could be more agresive, but the Turds, well, let them hang where they are, since they have not so far been anything but an paper tiger, and clings to what they belive is their rights, and I cant imagine any ZATO meber wanting to go to war against Russia inside Syria and die for some Turds, huh, give me an break, but they are backed by Trumpstein & Co and of course that is The problem, not the war against the scums of this earth, witch is at its end phase.

God there is much bullshitting out in the comentary fields this days, yeah, crawl back to the Corona virus hysteria and you just make your self to be fools in this realms.
And my respect for ANNA is sky rocketing, it was starospheric from before but now gone to new hights, and my only request is in all humblenss is why dont you translate the text, and I know its done in an hurry, but if you have written some on Russian, it can be auto translited to English, dont bother to be hysterical about correcting the gramma, just give us the raw material, thats it, apart from that, your news videos are world class, non beside and nothing above, keep up the good work.
I usually never watch war porn, but ANNAs reports are an exspetion along with the Yemens/Houtis reports.

That doctor guy is just another troll. Never posted here before, but then posts his bullshit spaming every post.

They come and go. His attemp is so silly though, that most that have followed this war can easily spot this as BS. ;)

Doctor is a demon a zio one

SYRIAN ARMED FORCES, RUSSIA & THE OTHER SYRIA ALLIES ARE DOING A SPECTACULAR LARGE SCALE JOB.
EMPHASIS – THEY MUST REACH SYRIA’S BORDER AND SECURE IT WITH HEAVY MILITARY PRESENCE. NO ONE ENTERS SYRIA WITHOUT FULLY BEING CHECKED. THE REFUGEES MUST GO THROUGH AN IDENTITY PROCESS TO RETURN; SYRIA DOESN’T WANT ANY TERRORIST GANGSTER FACTIONS SNEAKING BACK INTO SYRIA.

KEEP POUNDING 24/7 !!!
UNTIL “ALL ” THE TERRORIST GANGSTERS AND ILLEGAL OCCUPIERS ARE COMPLETELY ELIMINATED FROM SYRIA’S REAL ESTATE.
…THE FARMLAND IS JUST AS IMPORTANT TO SECURE AS IS THE INFRASTRUCTURE. 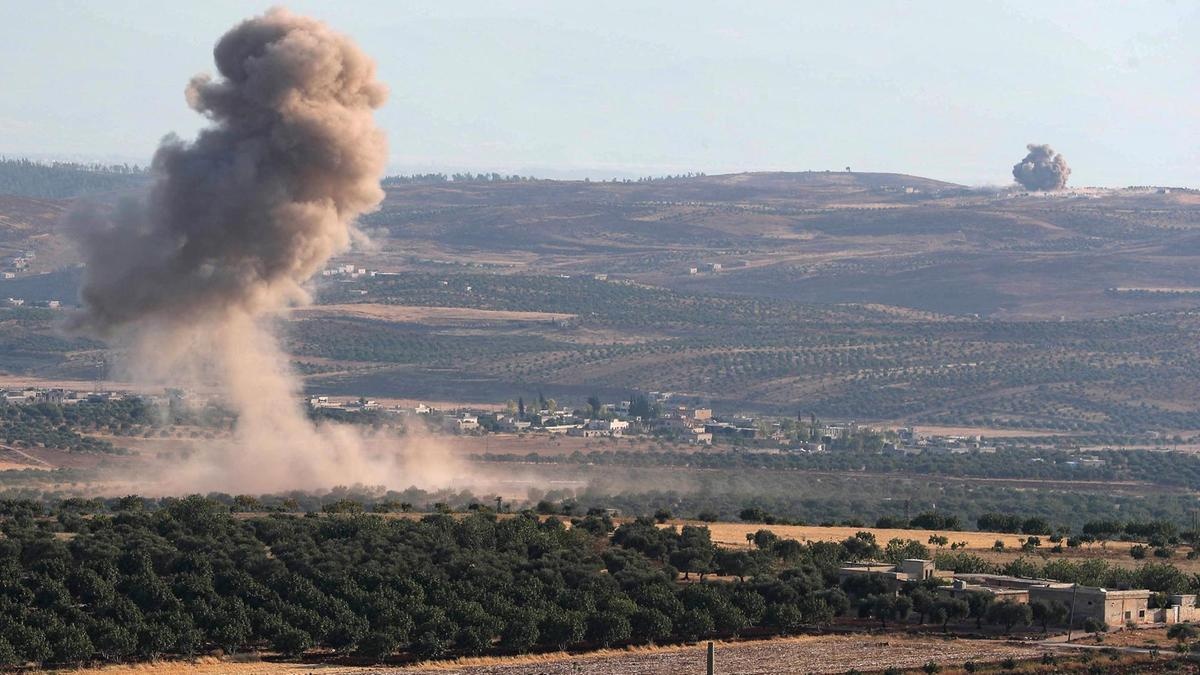 Question is, did the citizen database survive the war? Seems like a priority target. lol