Ankara has made a warning to Moscow alleging Russian planes have invaded Turkish airspace on Friday. 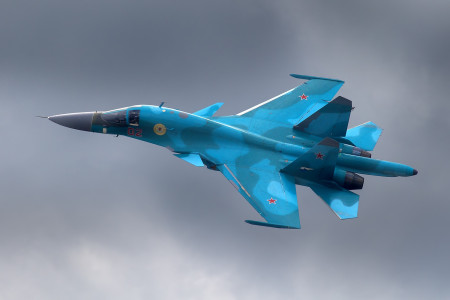 According to declarations of the Turkish Foreign Ministry, a Su-34 plane of the Russian Federation Air Force invaded Turkish airspace at 11:46 local time on Friday, as it was released on an official statement.

Also, it was informed that right after the incident, Turkish officials called the Russian ambassador to Ankara to complain about the alleged violation of airspace by the Russian aircrafts.

The Turkish Foreign Ministry informed that, despite the radar warnings, the Russian Su-34 continued to fly over the airspace of Turkey; however, no precise position of where the violation took place was released by the cited Ministry.

This wasn’t the only accusation made by Turkish officials who also claimed that Russia is continuously provoking an imminent escalation in the tensions between both nations so, if there are any retaliations due to the last incident, Moscow should be responsible for the consequences.

The mentioned warning didn’t came only from the Turkish Foreign Ministry, but also from the Turkish President Recep Tayyip Erdogan, who also condemned the alleged invasion of airspace by members of the Russian Air Force adding that: “…such irresponsible steps do not benefit either the Russian Federation, or Russia-NATO relations, or regional and global peace”.

Also, Erdogan convoked a briefing with his Russian counterpart Vladimir Putin to hold a discussion about the last impasse supposedly happened on Friday. No response from the Russian side has been received, Erdogan said.

Jens Stoltenberg, NATO Secretary General asked Russia to act responsibly and fully respect the alliance airspace and take all the necessary measures to guarantee that such violations won’t happen again.

Tensions between both, Russia and Turkey have grown bigger since the incident happened on November 25th 2015, when a Su-24 aircraft of the Russian Air Force was downed by Turkish forces under allegations of having invaded Turkish airspace. Since then, a series of economic sanctions have been imposed by Moscow to Ankara, and all military alliances have been totally suspended between both nations.

Turkey’s accusations and criticism to Russia emerged since the beginning of the operations of the last ones in the fight against Daesh in Syria by request of the Islamic republic’s leader Bashar Al Assad. Russia has openly denounced Turkey’s double-standard when claiming to be an active part of the struggle against terrorism and at the same time supporting it by contributing to its financing through illegal activities such as oil smuggling.

It is not possible to see what type of aircraft or from what nation the radar signature is from, if there was one at all. This is just more saber rattling from NATO.