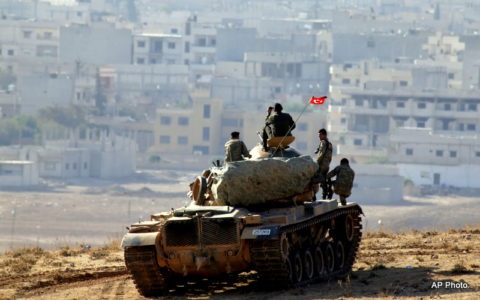 The Turkey-backed armed factions in “Afrin” in northern Aleppo go on pillaging and taking over civilians’ properties without deterrence or taking into consideration the harm the families enduring those violations are exposed to. The latest to come was committed by the “Al-Sham legion” factions’ militants, who took over a farming land containing over 60 olive trees after expelling the landowner’s legal representative.

Sources clarified that the factions’ militants stormed, Saturday morning, farming land in the vicinity of the “Kabashin” village in the “Shirawa” neighborhood sending away the one who is responsible for the land at gunpoint and arrest threat then they brought in heavy vehicles to uproot the existing olive trees, that are over 60 ones.

The sources pointed out that the militants plan to build a headquarter and a military post for them in this land, which they took over under the pretext that the one who is working in it is not the owner, rather he has authorization from his relative, the owner, who is living in areas out of the militants’ control.

The armed factions’ violations of civilians’ properties in the “Afrin” region are not limited to vandalizing the lands, rather the manners of theft evolved into selling these lands for their advantage.

The sources confirmed that a leader in the Turkey-backed “Sultan Murad” faction recently has sold land that contains olive trees and other green trees in the “Der Suwan” village in “Sharan” to an acquaintance cooperating with him to cut those trees and trade their wood
The land sold by this leader contains about 650 trees that would be cut and sold at high prices as firewood for heating exploiting the needs of the locals for heating in the light of the rising fuel prices in areas under the control of Ankara’s factions.

At a time when the thefts carried out by the armed factions of civilian properties in Afrin are increasing, the Turkish forces backing them continue the military escalation on the fighting fronts in northern Syria through the attacks that have increased in various areas of the countryside of Raqqa, Hasaka, and Aleppo.

The latest attacks carried out by Turkey’s forces, on Saturday morning, are represented by the artillery bombardment on the two villages, “Sayda” and “Al-Mualak”, and on other locations adjoining the international highway “M4” in the north to “Ayn Isa” in Raqqa’s countryside.

The sources also mentioned that the Turkish aggressions have not resulted in any casualties; its results were restricted to material damages to some shops and houses in the “Sayda” village.

When one is being tortured and told that everyone else will be set free, if one complies with the demands, it may be a BIG mistake to capitulate as the others are then told they must comply and so on. One may as well resist at the first instance when one is being threatened by FILTH. In the same way, protecting civilians may be leading to more harm and more deaths to more civilians. Think this through and do not comply with all of the hostage takers’ demands. I am sure that those being held hostage would prefer to be let go for the greater good, ie in order to protect others.

STrange behaviour for ”””’peacemaker””””’ …. UNHUMAN GENOCIDALS which (not “who”) kill innocent PEOPLE fighting for Freedom while talking of peace to Russia and Ukrainia after buying weapons from the first, and selling weapons to the second, and, finally, igniting the conflict with speeches that should have deserved the invasion / liberation of Anatolya … Yet it’s not a HUMAN behaviour, difficult to understand yet EASY TO BE PUNISHED ONCE FOR ALL!

The Turks military then, militants of the imperialist arms of Turkey leadership has been absconding Kurdish lands in eastern Syria as well as the diabolical nature around rocka and Islam, for many years. Seems there’s an advantage that Russia is utilizing $200,000 troops in Ukraine does not mean that Russia did not want soldiers in Syria ought be observed better!