It’s an analysis of the main tasks and objectives of the recent advance of the Syrian forces. 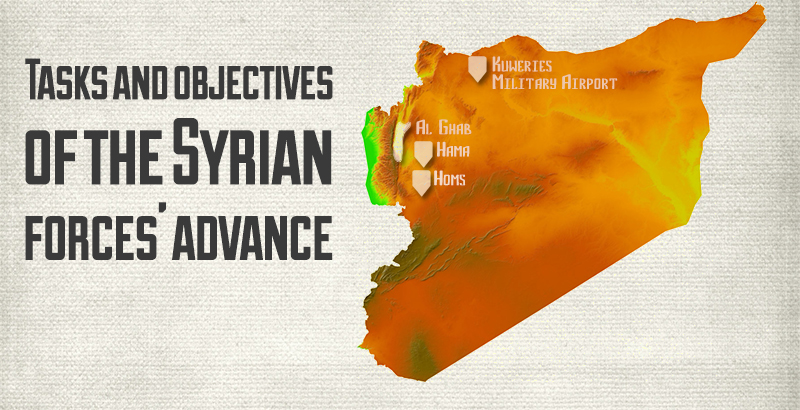 In September, SF Analysis & Intelligence predicted that the direction of the Syrian government forces’ advance will likely be Homs-Hama axis. Today, we can see that this prediction became reality when the Syrian Arab Army (SAA) and its allies started to advance in the northern Homs. Other important points are the sector of Al-Ghab and the Kuweries Military Airport besieged by ISIS.

At the moment, the main task of the SAA is to lock and encircle militants in the Homs sector. It will provide an opportunity to release forces and facilities for operations at other parts of the battleground.

The sector of Al-Ghab is important because it’s a key point for the advance on the city of Jisr alShughur. For militants this city is a foothold to advance further in Latakia. If the SAA takes it, this advance won’t be real.

The advance on the Kuweries Military Airport is a momentous event for the SAA’s morale. If the ISIS siege is broken, the SAA will show that it can turn the war around. This is crucial for the media coverage of ongoing events.

If the SAA gains momentum in the Homs-Hama axis, the next step will be to pressure the militant’s positions in Idlib, conducting a mousetrap there. Then, the ISIS capital Al-Raqqah will become a definite target of the Syrian government forces.

According to the reports, the Kurdish YPG has already started negotiations aimed at getting Russian air support in a possible advance on Al-Raqqah. In any case, these negotiations will have an influence. Likely, they will push the US to give YPG the support for this operation. The US really needs to show some success in the Syrian battleground. Moreover, the YPG is the only force that could be an alternative center of power to Assad in Syria (if we exclude terrorist groups.)

The Russian Air Force will play a key role in the Syrian government’s advance on the terrorist positions. They could be countered if the US or its allies will supply the terrorists with MANPAD to counter Russian warplanes. At the moment, it isn’t hard to believe that they could be released through Turkey supported by Saudi Arabia and Qatar. However, these actions would create a serious political problem for the US if the fact is revealed.