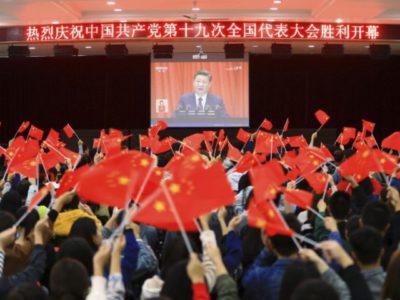 The United States government is ratcheting up a cold war against China. The Biden administration’s  agreement to supply Australia with nuclear submarines, its decision to create a new department in the CIA aimed at countering China, and its recent decision to impose a diplomatic boycott on the Chinese Winter Olympics are just three recent signs of the aggressive posture taken by the U.S. in the new cold war. A key part of the new cold war is a tidal wave of ideological attacks on China aimed at showing that China is a threat—to human rights, democracy, women’s rights, labor rights, and American security.   All of this is geared to justify American belligerence toward China and generate support for this belligerence and a frightened public’s willingness to pay for it. (Recently the Senate passed a bill previously passed by the House calling for $768 billion appropriation of Defense Department, $24 billion more than either Biden or the Pentagon sought.) A centerpiece of this ideological offensive that the mass media amplifies on a daily basis is that China is committing genocide against its Moslem Uyghur minority in the Xinjiang autonomous region.

Even though most politicians, as well as the general population, have no idea who the Uyghurs are, where Xinjiang is on a map, what Chinese policy toward the Uyghurs is, or even how to pronounce Uyghur, they buy the idea of Uyghur genocide. The widespread ignorance makes Maxime Vivas’s book  so valuable. Vivas not only provides a primer on the Uyghurs and Xinjiang, but also explains the Chinese policy in Xinjiang, and makes a forceful argument that the charge of genocide is of apiece with other lies like those about Iraqi weapons of mass destruction that serve to justify American imperial belligerence.

Vivas’s book provides an antidote to the anti-Chinese poison. Since Vivas’s book is only available in French, it deserves a summary in English.

Xinjiang is the largest province of China, embracing a largely uninhabitable 620,000 square miles, located in the far northwest of China next to central Asia, and  containing 25 million inhabitants of which 45 percent of whom are Uyghurs. The Uyghurs are largely rural and Moslem. Like many European countries, China has faced a problem of growing Islamic fundamentalism and the repeated terrorist attacks it has fostered. Since 2008 terrorist attacks by Muslim fundamentalists that have taken scores of lives. These included an attack preceding the Chinese Olympics in 2008 that killed sixteen, a 2014 knife attack on passengers in a railroad station that killed thirty-three, and most horrifically a machete attack on Han miners in Xinjiang in 2015 that killed thirty-one.

Since 2015, China has moved forcefully to combat the threats of Islamic fundamentalism, terrorism, and separatism in Xinjiang. Part of this policy has involved increased surveillance and arrests. Between 2014 and 2019, China arrested 12,955 alleged terrorists and confiscated 2,052 explosives. For the most part, however, the policy has been to combat Islamic fundamentalism, terrorism and separatism by raising the cultural, educational, and economic level of the Uyghurs and other Turkic peoples. This has involved investing in factories and mines in Xinjiang, building mosques and museums, and establishing educational centers to teach the Uyghurs vocational skills.

Does China’s Rise Really Threaten the U.S., Or Just Its Sociopathic Power Elite, Who Want to Keep Ruling the World Even if It Drags Us into WW III?

The western media have treated the Chinese policies as if they constituted a nefarious policy to eradicate the Uyghur people and their culture. Sources in the West portray the education centers as concentration camps and the training brainwashing. Vivas catalogues the charges: the Chinese have imprisoned Uyghurs for not eating pork or not drinking alcohol, have herded millions of Uyghurs in concentration camps, have harvested organs from living people to sell abroad, have sterilized women, have raped women and men, have brainwashed people, have made children denounce their parents, have demolished mosques, and so forth.  China has flatly denied these charges.

Vivas demonstrates that some of the most sensational charges are demonstrably false, are contradicted by verifiable facts, or have been dismissed by independent investigators.

Take the case of Adrian Zenz, a Christian fundamentalist, who calls himself an independent German researcher. In 2019, Zenz  claimed that 1.8 million Uyghurs were interned in concentration camps and that the falling number of births among the Uyghurs is evidence of genocide. The birth rate among Uyghurs has fallen, but Vivas points to several benign causes including the growing urbanization, the rising living standards, and the increased educational level of the Uyghur people. Moreover, Vivas points out that the death of Uyghur children has declined dramatically from 420 to 600 per thousand sixty years ago to 10.03 per thousand today. Also, in the past four decades the Uyghur population has grown from 5,550,000 to 12,720,000.  This is hardly what one would expect for a population supposedly undergoing extermination.

In a celebrated case used against the Chinese, a Uyghur woman, Zumret Dawul, claimed that Chinese authorities imprisoned her in a re-education camp and forced her to undergo the surgical removal of her uterus. The Chinese said that she was never enrolled in an educational center, and that after giving birth to her third child, she had had her tubes tied at her own request. Dawul’s brother claimed her story was a lie, and the hospital produced a document that Dawul had signed authorizing the surgery.

In another celebrated case, a Uyghur doctor living in the United States told Radio Free Asia on March 15, 2019 that he and rich Saudi Arabians were involved in an illegal scheme to harvest “halal organs” among Moslems in China. Six days later, he recanted and apologized for promoting a “hoax.” Though, this doctor has confessed criminal activity, no entity has brought criminal charges against him.

As for the charge that the Chinese were destroying mosques, Vivas replies that only mosques that have been demolished were unsuitable or dilapidated, and that in consultation with religious leaders and the congregations, these were replaced by new and often larger mosques. In seventy years, the number of mosques in Xinjiang has increased from 2000 to 24,400. In Xinjiang there is one mosque for every 530 Moslems.

In 2019, the World Bank loaned China $50 million to build five colleges to train professionals. Faced with allegations that the Chinese were using the money to build concentration camps, the World Bank conducted an on-site investigation. The Report of the World Bank published in Washington on November 11, 2019 concluded: “The examination did not corroborate these allegations.”

Most importantly, Vivas points out that in spite of the impression widely spread by the mass media and U.S. officials,  the accusation of Chinese genocide against the Uyghurs has not been supported by the United Nations. The impression that the United Nations backs these charges arose after August 13, 2018 when Gay Johnson McDougall, an American lawyer specializing in human rights who is also a researcher in residence at the Leitner Center of International Law and Justice of Fordham University, made a sensational charge at the UN headquarters in Geneva that China was holding millions of Uyghurs in detention centers or concentration camps. Though McDougall provided no verification other than saying her information came from credible sources, the charges were retailed widely by the New York Times, Wall Street Journal, Financial Times, and other news outlets. These papers  made no independent effort to substantiate the charges, aside from checking with so-called human rights organizations, such as the World Uighur Congress and  Chinese Human Rights Defenders, groups financed by the National Endowment for Democracy.

Moreover, when the United States tried to have the UN pass a resolution asking China to respect the rights of Uyghurs in Xinjiang only, 39 of the 193 member states of the UN supported it. For the most part the charges of genocide are the product of individuals or groups connected to the CIA, or the National Endowment for Democracy. For example, a major source of attacks on China’s treatment of the Uyghurs comes from the World Uyghur Congress (WUC), a self-proclaimed human rights organization founded in Munich, Germany in 2004, that advocates for the independence of Xinjiang, which it calls East Turkestan. Several leaders of the WUC had posts with Radio Free Asian and Radio Free Europe/Radio Liberty, both CIA creations. Moreover, the WUC is generously financed by the National Endowment for Democracy, the soft arm of the CIA.

Vivas is a former postal worker and former member of the French Communist Party (but not a member of any pro-Chinese party) who made himself a writer after his postal facility closed. Before this book on the Uyghurs, he wrote a book on Tibet and on the Chinese policies there. Though Vivas has visited Tibet and Xinjiang (twice),  his inability to read or speak Mandarin or Uyghur naturally limited his research. Nevertheless, using firsthand observations and sources available to any enterprising journalist, Vivas has produced a valuable book and a convincing argument that the charge of Chinese genocide against the Uyghurs not only is bogus but also has been systematically promoted by groups financed by the U.S. government.

In order for a news-report effectively to contradict what mainstream ‘news’-media are saying, it MUST link to evidence regarding its own allegations. Since this report by Roger Keeren ignores that basic requirement, I believe that it ought not to have been presented here. It was acceptable to Michel Chossudovsky (the editor at Global Research), but I believe that the editors at South Front should have higher standards than that.

The Report of the World Bank published in Washington on November 11, 2019 concluded: “The examination did not corroborate these allegations.”