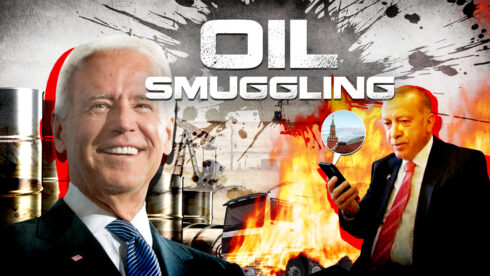 On 13 November 2019, the U.S. President said, regarding Syria, “We’re keeping the oil, we have the oil, the oil is secure, we left troops behind only for the oil.” That was at a press conference, and none of the reporters asked him any question about that statement. They certainly thought to be unremarkable, and not surprising, to hear an American President say that our country is stealing oil from a country that we have invaded and still are militarily occupying despite having no legal authority to position any troops there — publicly admitting to international gangsterism, in the very boldest way (yet without surprising anyone there).

That statement had followed a U.S. ‘Defense’ Department’s statement, on 25 October 2019, saying, with more tact, that, “The United States will maintain a reduced presence in Syria, to deny ISIS access to oil revenues as the next phase of the defeat-ISIS campaign.” It was tactful because it lied to claim this is to be done (and no reference to stealing anything) “to deny ISIS access to oil revenues” — the false underlying assumption being conveyed that this oil is ISIS’s and NOT Syria’s, so that even IF that oil is being stolen from ISIS (which wants to overthrow Syria’s Government, just as much as does the U.S. Government, though for different reasons), then it still is being done for a reason that America’s voters would approve of: conquering ISIS. In other words, the U.S. ‘Defense’ Department was tactful enough to misrepresent what the reason for these ongoing international thefts is.

On 10 August 2022, when that President’s successor was (and still is) in office, The Cradle news-site headlined “Washington steals over 80 percent of Syria’s oil output per day: The losses incurred by the trafficking campaign surpass $100bln, according to Syria’s oil ministry”, and they presented a stunning brief aerial-shot video (perhaps from Russian drones) showing the long strings of tanker-trucks hauling away that oil from Syria. Though the U.S. President now was from a different U.S. political Party, the U.S. foreign policy remained unchanged. 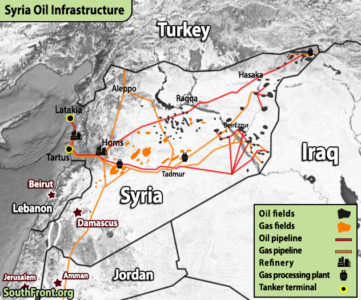 That President’s successor, though of the opposite political Party, continued these thefts. The thefts had been started by a President of this President’s Party, back in 2012, who was working with European partners perhaps as early as 2009, and definitely wanted “regime-change” in Syria at that time, but definitely by no later than 2012 he decided to support Al Qaeda in Syria against Syria’s existing Government at that time, late in 2012, and the planning for this overthrow of Syria’s Government was already functioning in June of 2011. The U.S. Government was doing this overthrow-operation not for any legitimate reason — Syria had never threatened, nor posed any threat to, the United States. It presented no national-security risk to the United States, whatsoever — and never had. This was purely an international-gangland operation, in order to benefit the billionaires who control (buy the winning politicians in) each of its participating Governments. All members of this international gang settled upon their plan “behind closed doors, at the sidelines of the Atlantic Council’s Energy Summit in Istanbul, Turkey, on November 22 – 23, 2013.” The Atlantic Council is NATO’s chief PR organization. Furthermore, allegedly, ISIS’s “two heads are the royal family of Saudi Arabia and the CIA headquarters in Langley, Virginia, U.S.A.” Lots more evidence along the same lines was given in the U.S. magazine Homeland Security Today, on 18 March 2019, interviewing “The ISIS Ambassador to Turkey”, who, for some reason, seems to have left ISIS. One of the U.S. gang’s mainstream news-media, TIME magazine, presented this operation as-if the U.S. Government were debating within itself pro-and-con about it, instead of fully committed to it (which the U.S. Government had been ever since 1949). They headlined about it, “Syria’s Opposition Hopes to Win the War by Selling Oil”, as-if “Syria’s Opposition” were anything more than Al Qaeda in Syria, and Kurdish separatists in Syria’s northeast — America’s proxy-forces to overthrow Syria’s committedly secular Government and replace it with a government that would be controlled by the Saud family.

On 29 September 2022, Steven Sahiounie headlined at The Duran, “Cholera and US sanctions killing Syrian civilians”, and reported that,

The deadly outbreak has claimed 39 lives in Syria, with thousands of suspected cases across the country. In areas under the Ministry of Health in Damascus, 23 deaths were reported recently, 20 of them in Aleppo, and at least 253 cases.

In the northeast region of Syria controlled by the US-backed SDF — a [separatist] Kurdish militia … — are a reported 16 deaths and 2,867 cases since September 5.  The US occupation forces there are controlling the main oil fields in Syria to prevent the Damascus government from using the oil to provide electricity for people’s homes, water pumping stations, and gasoline for their cars. …

Health authorities tested the Euphrates and found the bacteria causing cholera.  The river is polluted by raw sewage and oil spills from the US-occupied oil wells at Deir Ez Zor. …

According to the UN, nearly two-thirds of water treatment plants, half of the pumping stations, and one-third of water towers have been damaged by more than a decade of war.

Last winter, Syrians died in their homes without heating. … Diesel fuel is used in Syria for home heating, but it is expensive and often in short supply because of the US occupation of the oil wells in the northeast, and the US sanctions preventing importing fuels. Most Syrians get about one hour of electricity because the fuel used to generate electricity is taken by the US troops.

Sahiounie says that because of the heavy paperwork that’s required by the U.S. sanctions in order for Syrians to buy foreign medicines, hospital treatments for the cholera victims are impeded.

Here are some of the top agents in this U.S.-headed gang, agents of U.S. billionaires. These individuals don’t even need to worry about elections, such as politicians do, and they remain in office for as long as they want if they do what America’s billionaires want them to do. Like the politicians, they are answerable only to the billionaires and a few centi-millionaires, who fund their careers, but their jobs are easier than for publicly elected officials, who are constantly competing against one-another to win over those big-dollar donors. In fact, some of these agents had formerly been successful politicians, U.S. office-holders, but then ‘retired’ upstairs, where it’s far easier to remain in their jobs, not only because of the constant competition for mega-buck donors, but because constantly fooling their voters is hard work, not so easy as being a lobbyist is. These agents are ONLY agents, but they all are extremely well rewarded financially, for their services to the gangsters who own them — who have funded the wealth or their lobbyists and other agents. And you see there some of the U.S. mega-corporations that fund these peoples’ careers, on behalf of those corporations’ controlling stockholders. But, of course, the names of the billionaires themselves aren’t shown there. The billionaires generally stay behind the scenes, because they don’t want to be the people who will get blamed for the resulting Government.

Of course, the same things were true of this gang’s operations to take over Iraq, and are true today of the gang’s operations to retain control of Ukraine, which they had won in 2014. The American people find acceptable to be constantly lied-to, and to be ruled by, the agents of international gangsters — billionaires’ agents. It has been going on now blatantly since at least 9 December  2020, and actually ever since at least 25 July 1945, when this gang, these gangsters, America’s super-rich, took over the country, and have continued to hold control over America’s Government.

The majority of Americans vote for these gangsters’ stooges, instead of do anything to rebel against and replace virtually all of these stooge-officials who occupy congressional seats and the White House. So, the promises that are made to the public remain unfulfilled, while the promises that are privately made to the mega-dollar donors get turned into government-policies and laws. Even at the level of state governments, “Politicians Don’t Actually Care What Voters Want”. But, apparently, Americans find gangsters — agents of the billionaires — suitable to lead the country (on behalf of their funders — NOT of their voters). And those agents of billionaires then get to choose whom our judges will be. And, that’s okay. Or: Is it? Is it democracy, at all?

“Jackie? Where is Jackie?”

kamala harris: “our alliance with North Korea is strong and enduring…”

Jackie Kennedy is working in an underground bunker for $ billionaires.

Dr Zeus gets it wrong again… because so called lsis is the Yankee government.. in the form of the CiA and its aphex twin MosSad…

How can he not know this? when they were armed with Libyan weapons and supplied with American pickup trucks..

and all their leaders turn out to be ‘jews’….

And invaded Afghanistan for the heroin…

ZZZ
Reply to  Vlad from Romania

The only heroin they have got is the drug

I just tried to post a comment completely favorable to Russian interests, even praising Putin. And reCAPTCHA would not post it. Why, dear moderator, do you keep censoring my comments?

What in the world did I say wrong? If you have some comment policy, SF moderator, PLEASE let us know, so I don’t keep wasting my time. Anyone else have this problem?

My comment said nothing wrong. Just that criminals and idiots were running the West, and, it had to topple. What could possibly be wrong with this comment?

I’ve had to cut out so many words from my comment to get it through. The last word I finally cut out was “unstable”. What in the F**K could possibly be wrong with those words??

Because they want us to amuse ourselves in SF. Real news are as tragic as fake ones. And for the village idiot, Killary health is too bad to cover the role anymore.

I frequently steal lego from cute 7 year boys in Aalborg

Jens you know the order: you cannot go nearby children.

Americans did not choose to allow gangsters to take over the country, the Clinton, Bush, Obama appointed criminal Judges however, do allow this. Americans have no say in who runs their country at this time. The communists have taken over North America. 2020 Election was a farce. Fake numbers and a press that censored everyone else is all it took to steal a nation. The Americans will have to fight and die to get their country back. This is the WEF’s One World move. Putin is the only one fighting evil in this world. A great man, a strong leader, and a Christian. We appreciate Mr. Putin and his strength. FJB An American revolution is on the horizon. A matter of time.

Every time when Russian forces fuck up things they explain: “it was planned” or “we have just limited goals” or “it was unnecessary for us”. Russians are very good pathological liars, it’s in their genes.