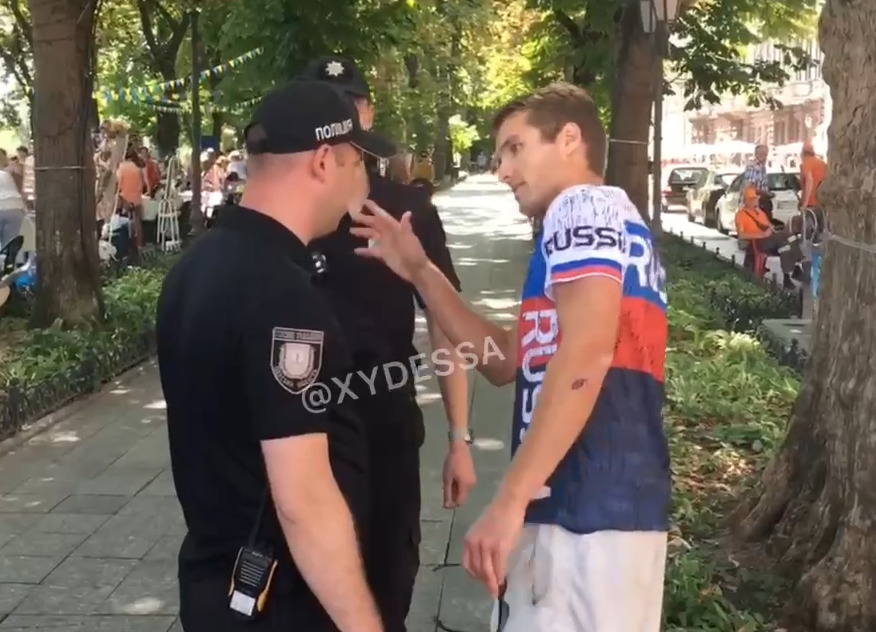 In Odessa, the police detained an American who was walking around the city in a T-shirt in the colors of the Russian flag and the inscription “Russia”, according to the website of the National Police of Ukraine in the Odessa region.

The man was detained during the ceremony of the ceremonial deployment of the flag of Ukraine at the Potemkin Stairs. At the same time, the American allegedly behaved “defiantly and provoked a conflict with citizens,” and also tried to escape from the police.

In a video published by local media, the American expresses his outrage at the actions of Ukrainian law enforcement officers during the arrest.

“I didn’t do anything wrong, I just walked and was detained by the police. Is this freedom in Ukraine? I have no weapons with me, nothing … Is this how you treat tourists? You guys are racists, you don’t like Russians because of politics, you are a problem in this world. Without Russia, you would speak German, you like the Nazis,” the man emphasized.

At the same time, the police claim that the man’s clothes were not the reason for the arrest. According to them, the foreigner allegedly provoked the conflict and did not react to the attempts of law enforcement officers to calm down.

In particular, he stated that he had done nothing wrong, called the police officers racists who “do not like Russians because of their politics,” and promised to “contact” US President Joe Biden.

“I <…> just walked around and was detained by the police. Is this freedom in Ukraine?” he asked.

He also praised Russia for being the first country to space, and more pleasantries while suddenly attempting to escape and to shortly get captured again by police, this time in handcuffs.

The Dumskaya outlet published a photo with the passport data of the man, from which it follows that he is indeed a US citizen, but at the same time he was born in Russia.

The police drew up protocols against the man under the articles “petty hooliganism” and “willful disobedience to a lawful order or request of a policeman.”

Later on the same day, Odessa activists took a T-shirt with Russian symbols from a US citizen and had a conversation with him, the Telegram channel notes.

On June 30, it was reported that a fan who came with a Russian flag to the Ukraine – Sweden match had his shirt torn off.

Before the game, the man was photographed with a Ukrainian fan. In the picture, two viewers were standing, embracing, and smiling. However, after the match, footage appeared on social networks and Telegram channels, in which a Russian in a torn T-shirt clings to his face. The tricolor is no longer with him. The organizing committee of the European Football Championship in Glasgow has launched an investigation into the incident.

Nope. The Donbass and Luhansk boys are rebels against the yoke of current neo-facsist Kiev. Kiev shells its own citizens and its ethnic minorities. It’s a neo-fascist state run by competing oligarch trash, what minority wouldn’t want to secede from it!

You are definitely gay but your name is probably Buttercup

Very smart to do this on their independance day…

There have been no police in Ukraine since February 2014 after the Coup,they are Fascist thugs wearing police uniforms.

It just shows how low Ukraine is today. They attack the Russian language, churches, and even someone just wearing a shirt with Russian colours. To think that the western world better known as the US, England, and the EU actually approves such actions taken by a country they support is ludicrous.

Ukraine is nothing more than a shithole and their people are too stupid to realize that it’s only getting worse for them. Since 2014, during and after the US, UK, EU supported the coup, they lost Crimea, a good portion of Eastern Ukraine, once Nord Stream 2 is operational, a large portion of gas transit fees (billions) and they are still not smart enough to realize that while listening to the US, UK, and EU, they are constantly paying for it. They are so anti-Russia that they prefer to lose everything than to prosper with Russia’s help.

Here’s a tip for Ukrainians. The US, UK, and EU, don’t give a sht about you. You are just a tool for them…nothing more!

Dumber than dumb,they call that freedom?

Meantime you Infastructures,jobs and education are heading towards 1930s pink swastika eras=FAIL:

You seriously need a medic boy.

Ukropnazis are taking foreign hostages now. Time to send in DELTA and free him.

I didn’t see him wearing an Ukropnazi flag..so you are wrong…

Again with the sperm? Why. didn’t you get your daily dose?

This guy just loves his sperm!

Stupid Ukro-Nazis you want a good relationship with the Neocons and you detain one of their own, oh, like he said, this makes you look bad, you just push the US away from you. Ahhh. Russians will eat you one day Nazi motherfuckers.

Russian flag is not prohibited in Ukraine. The same thing if you will be taken by police in NY for wearing France flag T-shirt. By-the-way this guy is Russian native who was adopted by American parents.

it is inconceivable that this would happen in the United States. This is a violation of human rights.