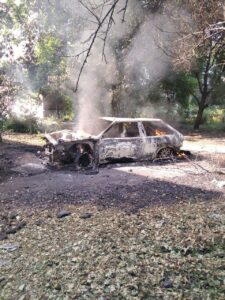 The AFU have become extremely active over the past few days. The Ukrainian army continues intensive shelling of the DPR, LPR, and adjacent territories. The Russian army holds the lines and meets the Ukrainian forces with return fire. Along with heavy shelling on the residential areas in the Donbass region, the Kiev regime commit terrorist attacks in other regions that came under control of Russian forces. Ukrainian terrorists are trying to intimidate the population and officials loyal to Russia.

In Nova Kakhovka in the Kherson region, unknown men blew up the car of Iryna Makhneva, head of the local Department of Education, Culture, and Sports. She was not in the car and survived the attack.

“The explosive device went off earlier, and it saved Makhneva’s life,” the Ministry of Internal Affairs of the Kherson region reported.

This was not the first assassination attempt in the region which came under Russian control.

On June 24, Director of the Youth Policy Department Dmitry Savluchenko was killed in the city of Kherson. His car was alse blown up by Kiev-led saboteurs.

Another terrorist attack was prevented in the city of Kherson on June 27. The local security authorities claimed that the Ukrainian deserters, who were hiding in the city, were going to carry out a mass shooting of civilians in the local Diligence hotel and blame it on the Russian military.

The former Ukrainian servicemen confirm that they are ordered by the Kiev’s command to carry out terrorist attacks in the Kherson region.

Man: We came to the (Russian) military commandant’s office. We decided to surrender, because we are not loyal to carry out the criminal orders of the Ukrainian Army anymore, namely, carrying out sabotage and demolition work on the territory of the Kherson region against the civilian population of the city and its infrastructure. We have renounced terrorism. We don’t want to participate in this terrorism. We realized that these were criminal orders.

We are military personnel, we served under contract. I’m a junior sergeant.

We saw that the Russian military helping people restore peace, protecting them. And our leadership, as I said, demanded that we coordinate the military and that we engage in subversive work.

We realized that this is a war against civilians, and it is totally inappropriate. We are not terrorists. We have never been and do not want to be. We want to live peacefully, in a peaceful country, in a peaceful city within Russia.

They (the Ukrainian command) were slowly persuading us to do this. They forced us to move towards Nikolaev, to break through. We refused because our home is here. Our land is here. And we are already tired of hiding somewhere else. I don’t even know how to explain it to you properly.

At first they forced us to transmit coordinates. We also refused to transmit. Then they slowly gave us hints: “Maybe people will come in … there will be explosives… will you blow up?” To this we immediately answered no, for which we were considered deserters and traitors.

Now we are convinced that all this is not true, it’s all a lie. On the contrary, I see that Russian soldiers are helping people here to set up a peaceful life and treating us well.

Meanwhile in the Donbass, attacks on the civilians continue. The number of casualties grows on a daily basis.

The LPR government states that the AFU continues to terrorize the civilian population of the Republic, shelling civilian infrastructure in LPR frontline communities that are not dangerous to the enemy and are not military objects.

There are statistics on the LPR for June 27. A Tochka-U missile and 19 shells and mines of 122 mm caliber were fired at the LPR. All the strikes hit the settlements of Stakhanov and Kremenna. One woman was killed in Kremenna and 10 residential buildings were damaged in Stakhanov. In Zimogorye, in the Luhansk People’s Republic, an ammunition depot was attacked, shot by new HIMARS vehicles.

Also in LPR, the settlements of Rozovka and Novobakhmutovka were shelled, which received about 6 shots, and the town of Svetlodarsk was also hit, where one person died and three were wounded as a result of the shots. The village of Yanovitaya was also hit by a series of shots.

A group of DPR representatives came under fire near the Gornyak settlement in the Kuibyshev district of Donetsk. Kremen also did not miss the targets of the nationalists – a woman was killed there, just as after the shelling in Horlivka. Local residents in Horlivka confirm that Kyiv is striking the city every day, attacking the civilian sector.

Consequences of shelling in Horlivka

The village of Krasny Liman is subjected to constant shelling by the Ukrainian Armed Forces. The DPR People’s Militia is trying to resolve the situation.

A total of 11 settlements in the DPR were shelled on July 27. Two civilians were killed and nine residents were injured. A total of 18 residential buildings were damaged.

On the same day, the AFU again attempted to hit the city of Kherson with the Tochka-U missile. The missiles were intercepted by Russian air defense means.

Only an MSM brainwashed moron, or a complete psychopath could still.support the Ukro-Nazi terrorists.

Anglia
Reply to  Z FOR VICTORY

Now they are openly using full scale ISIS methods. This is pure evil. The Russian Air force should destroy those who gave the orders to apply ISIS style killing of innocent civilians.

Same methods, and they have the same masters as ISIS.

The Russian need to push them out of range then, quit whining about things you control.

Sobering read. You have to feel for these poor soldiers of Ukraine. Now having realized who the real enemy is, they bravely refuse to take part in the war against the civilians of their homeland. Hopefully many more Ukrainian soldiers will wake up to the truth of this war and stop fighting for the scumbag leaders of Kiev, who aren’t even Ukrainians or Russians. Many of them are of course Jews, including the clown in charge, who hate the people of Ukraine and want them all dead!

AFU troops will figure out they are run be mobster NAZIS and turn their guns on their oppressors. It will take time before the fragging is reported in the MSM but it will happen. Time is running out for the Nazis.