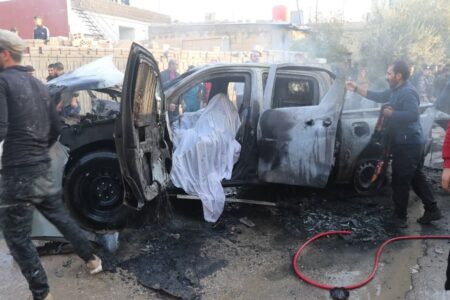 On November 9th, a large explosion hit the town of Qamishli in north-eastern Syria’s al-Hassakah governorate.

According to initial report, a car explosion took place in the al-Hilaliye district in Qamishli. Later, it was clarified that the explosion was a result of a drone attack.

Three people were killed in the explosion.

Siyamend Ali, head of media for the People’s Protection Units (YPG), said in a tweet that “three people were martyred as a result of a drone attack against a vehicle in al-Hilaliya neighborhood in Qamishli by the Turkish invading state today.”

The victims were not officially identified.

Asayish forces said in a statement that all the victims were civilians, identifying them as Yousef Gilo, Mazloum Gilo and Mohammed Gilo.

According to Rudaw English, the vehicle belonged to Mazloum Gilo, a commander of the Syrian Democratic Forces (SDF), who was not on board during the attack.

No side has claimed responsibility for the attack. But Turkey is the main suspect, as it is targeting SDF fighters both with drones and artillery on a regular basis.