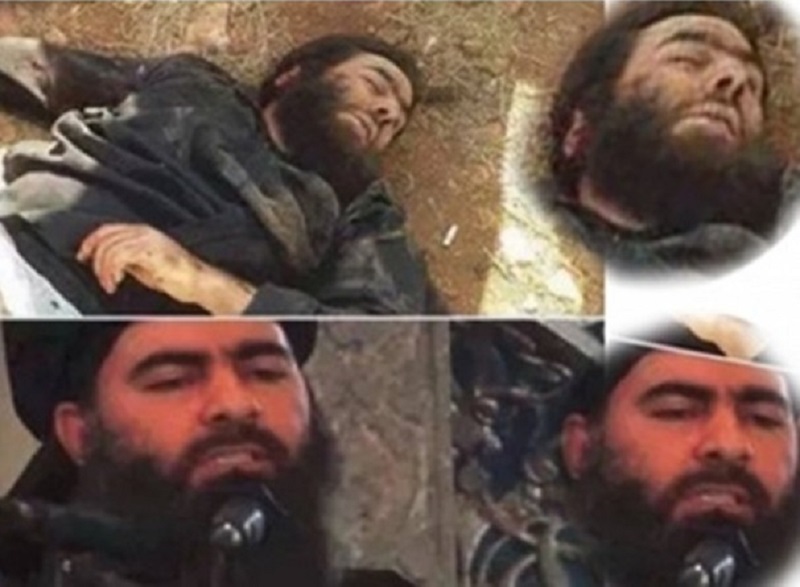 Alleged photo confirming the death of the ISIS leader

An alleged photo of the dead ISIS leader, Abu Bakr al-Baghdadi, is circulating online. The photo has been released by the Iranian media outlet “IRIB” (source) and was widely spread by various media outlets.

However, it seems the same photo was already circulating online in 2014 when the reports about the death of al-Baghdadi appeared to be untrue.

On Thursday, Representative of Iran’s Leader in IRGC Quds Force, Ali Shirazi, said tht “the death of this terrorist [al-Baghdadi] is certain,” according to the IFP. However, no details confirming the alleged death of the  terrorist organization has been provided yet.

Nope. Nose is different. Just give it up. Israel will protect this guy. He is one of theirs. His name is Shimon Elliott. Probably stays in Tel Aviv and sends his broadcasts from there. Never going to be killed. Like Osama Bin Laden – a fake death. He’s been dead for ages, died from kidney failure soon after the 9/11 attacks, but not before giving an interview to a Pakistan newspaper in which he denied doing the 9/11 attacks, apparently. It would fit with his modus operandi of not targeting civilians in Afghanistan. Osama mainly targeted USSR military.

I agree on Osama, he probably died during the Tora Bora carpet bombings, if not earlier.

I believe that Obama decided to perform the pantomime operation to “kill him” to close that chapter of US history. Of course, he picked the only viable option at the time, since divulging the truth about 911 would probably cause the second american revolution.

Osama was a CIA agent !! , and I thin he is still alive, part of a typical the cover up CIA operation, making believe that he is death. Holliywood, of course, cooperate with government lies.

Of course he was, but that doesn’t mean he did 9/11. You think Osama was able to fly planes with pinpoint accuracy and set two floors on fire in each of the Twin Towers, and WTC 7 too, even though it wasn’t hit by a plane, and then disintegrate them into dust (0.3 micron concrete particles) in a sudden pancake collapse that shot out 30-ton steel beams horizontally into the WFC building 150 meters away? While zapping 1,200 people into dust so that no body parts were found of them? https://apunked.wordpress.com The CIA has a habit of recruiting extremists and using them for insurgency operations and then later turning on them, and naming them terrorists. The point is neither the CIA nor Osama Bin Laden did 9/11. It was Israel (Mossad and hundreds of Israeli art students). CIA is not that powerful. And neither is the US government. The president and Congress have to bend over and grab their ankles when Israel tells them to.

Thank you for pointing that out. The Saudi citizens (supposedly involved) that day could not have taken those buildings down, especially not Tower 7 haha. https://www.youtube.com/watch?v=jNYYS3aVSBU

Whether he is alive or dead, it doesn’t really matter because the ideology that motivated him is still alive and well and is even stronger than ever and many tens of millions believe in it.

There is no real ideology behind ISIS. It is the Hornet’s nest strategy advertised by Killary Clinton, recruiting desperate Arab youth under military control to operate a fake jihadist proxy army to implement chaos into the Middle East, salaries coming from Saudis, vehicles and weapons from US, medical care from Israel, commanded by CIA/Mossad. Proxy army which they try to utilize globally. Similar thinking underlined the launching of Hamas by Mossad, to compete with PLO/Fatah (divide et impera). Luckily to Gazans, Hamas escaped out of Mossad’s control and became a real Palestinian organization, militant enough to assume the responsibility to assume the defense of Gaza. The same could happen with ISIS, when the recruits realize what they are used for and when they can obtain funding from elsewhere. Then the hornets can attack also their previous masters.

Yes, there is a real ideology and it is Salafi, Wahhabi, Takfiri ideology which is raging havoc all over the world. It is a global jihadist ideology and sure, U$ and its greedy and stupid allies are channeling it and trying to use it to their own evil imperialistic goals but the ideology is real and dangerous and it considers the rest of humanity as an enemy to be converted or destroyed.

It is good to know that he is now with Alah a with his 70 virgins, enjoy your death.

It is a different guy.

Having to deal with ‘ 70 Virgins ‘ cat fighting and demanding this that every day for eternity would be hell on earth in my opinion :)

you can assume that at least 10-11 are suffering from PMT at any one time….

maaaate… that sounds like Hell on Steroids to me.

I agree with tigbear, look at those nostrils. The real Shimon Elliott (under cover name al baghdadi) his nostrils are very round. The dead fake-Monotheist in the pictures, his nostrils are very elongated from front to back. Unless he had time to stop in Tel Aviv for a nose job a few months before his death, genetic-science says this is not him.

The important issue here is why would Israel pretend that Baghdadi is dead? What do they get out of it? They want ISIS to lose morale and disband? But isn’t Israel still supporting ISIS insurgents when they get injured? Does Israel feel they have lost control of ISIS and ISIS insurgents are doing things they don’t like? Like ignoring “Baghdadi”?

Nothing happens by accident in these situations. If “Baghdadi” is shown as dead in photos, it means Israel wanted “Baghdadi” to disappear. They’re not going to use this fake person anymore.

Probably the truth will come out.

Perhaps since ISIS have stopped getting money from Qatar, they have decided to do their own thing. Islamists don’t like Israel. If Israel is getting one of its goons (Qatar) to use its own money to fund ISIS and tells ISIS “Don’t attack Israel”, ISIS will obey. They trust the financier who’s an Arab and Sunni.

Qatar cuts off funding now they realize ISIS and FSA were never meant to get a piece of the pie, and they say, “Israel is bullying us and may get Gulf allies to attack us”.

ISIS starts to wake up. Turkey no longer supports them. Qatar doesn’t. All their efforts are resulting in the KURDISH taking over. So they now see the light – how they’ve been used.

And the US, Israel’s ally, is hitting them hard, using KURDISH (non-Arabs) to do so. This wasn’t part of the plan. They didn’t sign up for this. At the end of the day, Assad is better than some Kurd as leader of Syria, in their eyes.

So, they start to be disobedient. They do their own thing. Israel fears they may turn against Israel.

They’re not easily controlled any more. They’re short of funds; they’re losing; they’re being attacked from all sides … they’ve got nothing to lose. And they’ve been betrayed.

The master plan is coming out. It is fully revealing itself, including how ISIS would be used (and thrown away afterwards).

Maybe this is the reason why.

Nothing happens by accident. Al Baghdadi has been eluding people for more than six years, and NOW he gets caught???

This is like the Osama Bin Laden story. He eludes everyone for years and years even though he’s the no. 1 target, and then wham, he’s caught and killed (and body disposed at sea, conveniently) in a house where he’s been living quietly all this time … If you believe that, well, you’ll swallow anything, I’m afraid.

Good thinking, tigbear, agree with you on most issues.

http://bit.ly/freesyriia Give your vote for free syria !!