When the US and NATO war of aggression was launched against Syria,  Dr Nabil Antaki could have abandoned Aleppo to ensure his own safety. Instead he decided to remain and to serve the besieged people of his City, working with various local charities.  Above all, he wanted to bear witness to the destruction caused by Western support for the foreign armed groups who have been systematically destroying Syria and terrorising its people for the last 5 years. 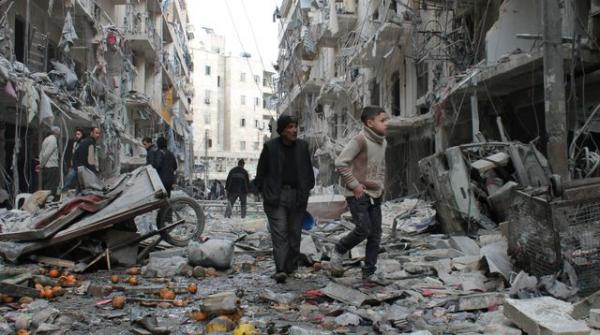 Yesterday [SF editor: On April 30] Silvia Cattori recorded this report from Dr Antaki on the recent amplification of propaganda surrounding events in Aleppo.  It has been translated from the French by Vanessa Beeley. “With regards to recent events in Aleppo, I state very clearly that the mainstream media are lying by omission. Since the beginning of the war in Aleppo that began 4 years ago, they have consistently failed to report all the facts.

All of us here in Aleppo are disgusted by their lack of impartiality and objectivity. They only ever talk about the loss of life in the east of Aleppo which is entirely controlled by Al Nusra, a terrorist group affiliated with Al Qaeda. These are their “moderate rebels” a title that affords them an unmerited degree of respectability. This same media remains silent on the daily losses and suffering endured in the Western areas of Aleppo living under the rain of mortar fire from these terrorist factions.  This media never mentions the terrorist blockade upon our people or the electricity cuts and water shortages inflicted upon us by their “moderate rebels”

Read more on Aleppo’s terrorist blockade, water shortages and starvation here: Syria, from the Sublime to the Shameful.

This media never mention the continuous bombardment and the carnage we have witnessed in western Aleppo where every single sector has been targeted. On a daily basis we see dozens of people murdered. What makes these omissions even more despicable is that these areas represent 75% of Aleppo and there are 1.5 million people living in them. Compare this to the 300,000 living in the eastern zone which is occupied by terrorist groups.

This twisted narrative engenders the belief that these terrorist groups that are attacking us are actually the victims. Even more abhorrent, these media have distorted our “Save Aleppo” appeal, to make it look as if we are calling for Assad and the Syrian Army to cease hostilities!

This is FALSE. Added to which, they are not “Assad’s forces“, they are the national forces of the regular Syrian army that is defending the Syrian State.

The western and gulf media could at least have had the decency to mention the terrorist massacres of our people. For example, on Friday 30th April, when one of their mortars targeted a mosque at prayer time. The attacks and losses we suffer are reported in a way that leaves the public in the dark about the true perpetrators of these crimes.

For three days now, these media outlets have been accusing the “Assad regime” of bombing an MSF hospital [Medecins sans Frontieres] to the east of Aleppo and of killing the last paediatrician in the city. This demonstrates that, for these media, the only priority is this pocket of the city where terrorists are embedded.

The three quarters of Aleppo under Syrian Government control where numerous paediatricians are practicing is of no consequence for this media. We witnessed the same bias when Al Kindi, the biggest hospital in Aleppo, was targeted by terrorist mortars and then intentionally burnt down about 2 or 3 years ago. The media ignored this criminal act. We are disheartened and disgusted by this continuous disinformation.”

Hear, hear! The main stream media has been and still is feeding us a bunch of lies about what is going on in Syria!