Sussex authorities informed of the arrest of a 41 year-old French citizen armed in the North Terminal of Gatwick Airport. 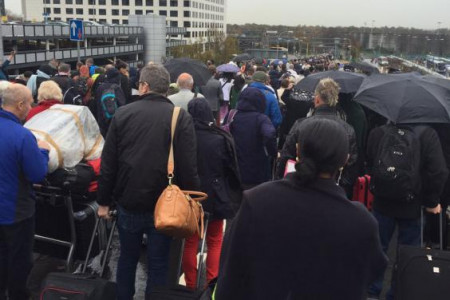 Evacuation: passengers stand in the rain outside the terminal (Tim Unwin)

Earlier today alarms were on in the North Terminal of Gatwick Airport due to the threat of a man who approached to a check-in desk heavily armed. Short time after this, the airport security staff and the Police arrested the man who was confirmed to be French.

In order to secure the place, the passengers who were in the facilities were evacuated after the incident.

Also it’s been informed that the Bomb Squad arrived to the terminal to handle the threat of a suspicious package.

Detective Superintendent Nick May said: “The man is being interviewed as we try to determine the circumstances of the incident, but at this time it is too early to say what his intentions, if any, were.

The North Terminal of Gatwick Airport was reopened at 6:10 pm London time.