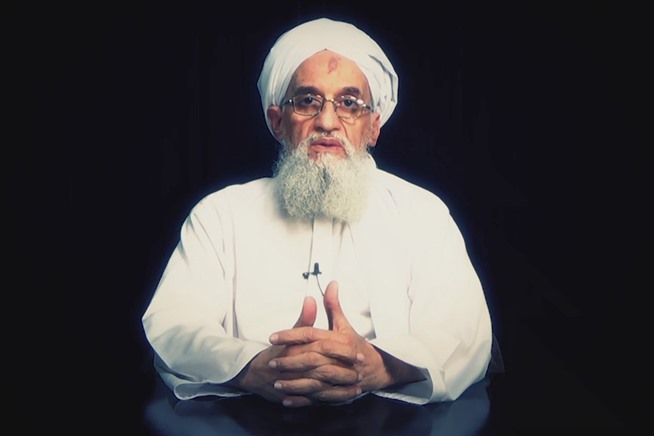 Ayman al-Zawahiri as seen in one of his video messages.

Top leaders of the Syria-based terrorist group Hay’at Tahrir al-Sham (HTS) have mourned al-Qaeda leader Ayman al-Zawahiri who was killed in a recent US drone strike on the Afghanistan.

HTS was first established in 2012 as the al-Nusra Front, al-Qaeda’s main branch in Syria. In 2016, the terrorist group changed its name and claimed that it had split from al-Qaeda. Since then, the group has been ruling over the northwestern Syrian region of Greater Idlib.

Despite the group’s constant attempts to distance itself from al-Qaeda, its top leaders were too emotionally effected by the assassination of al-Zawahiri.

Member of the Supreme Ifta Council and head of the Sharia Council in HTS, Abd al-Rahim Atoun, mourned al-Zawahiri, calling him as a “martyr” and praying for him.

“May God have mercy on Sheikh Ayman al-Zawahiri and accept him … and grant him the highest paradise with the prophets, the truthful ones, the martyrs and the righteous,” Atoun wrote in a post on his Telegram channel.

Al-Zawahiri was killed on July 31 in an early-morning drone strike conducted by the US Central Intelligence Agency in the upscale Sherpur neighborhood of the Afghan capital, Kabul, reportedly in a house owned by Sirajuddin Haqqani, a senior official in the Taliban government.

On the evening of August 1, delayed by two days to allow time for proper verification of the operation’s success, President Joe Biden announced that US intelligence had located Zawahiri as he moved into downtown Kabul in early 2022 and had authorized the operation a week prior. Biden also stated that the operation incurred no civilian casualties nor had it harmed any members of Zawahiri’s family.

“Now, justice has been delivered,” Biden said at the White House. “And this terrorist leader is no more; people around the world no longer need to fear this vicious and determined killer.”

None of HTS leaders who mourned al-Zawahiri threatened, or even blamed the US over the drone strike that claimed his life.

Al-Zawahiri took over al-Qaeda after the 2 May 2011 US raid in Pakistan’s Abbottabad, which claimed the life of the terrorist group’s leader Osama bin Laden. In 2016, al-Zawahiri opposed the split of HTS from al-Qaeda, stating that it was done without his consent. However, it didn’t take any move against HTS, likely because the al-Qaeda’s relations with the group didn’t change much after the split.

HTS split from al-Qaeda was more of a propaganda stunt orchestrated by group’s leader Abu Mohamad al-Julani, who wanted to appease the US and its Western allies. To this day, HTS remains the largest al-Qaeda-affiliated group in Syria. The group continues to follow the teachings of al-Qaeda’s and to foster its the ideology. At the same time, it is attempting to build relations with the US, who sees it as a strategic asset.

Well.. l suppose the mourners are all CiA in turbans bussed in from Langley.. because according to the Yankees they’ve supposedly killed this fool three or four times already…..

Use by date of this al-qaeda figure was long overdue since he had obediently played his scripted roll assigned by Penta-goons and therefore eliminated to erase the possibility of terrorism committed in complicity with masters being exposed in public… Will the same masters do the same to Zelensky once the risk of crime exposure becomes closer to reality..?

So, actually it was Russia who killed those pigs in those towers on 9-11. Just one more reason to love Russia.

No, the Taliban came into power after SU left Afghanistan. Suppose you include all of Afghan as “Taliban/Pashtuns” well, yeah. But that isn’t true at all.

There’s an obvious pattern here that the US-led NATO repeatedly employed on their clandestine operations to destroy countries defiant to their dark agenda, good examples is when the western allies formed the mujahideen militants that gave birth to talibans and Al-qaeda as proxy group to fight the Russian presence in Afghanistan.

And then the Iraqis who were also used by the west as proxy army that waged many years of war against defiant Iranians.

The conversion of defeated Iraqi army into brutal ISIS extremists as proxy who were recruited, trained, armed, financed, supplied by the evil west that almost toppled the non-compliant government of Syria.

And the latest proxy army of Ukraine completely supported by the US-led NATO who are currently engaged in a hot shooting war against the designated long time enemy of the west.

There you are.. The real bunch of demons of what we known as the beacon of democracy and freedom.

Another strategy used by the evil empire was its *divide and conquer * handbook.. It’s self explanatory or one could simply recall to what happened in Afghanistan, Libya, Iraq, and Syria where death and destruction prevail as of today, civilian infrastructures are gone, people were made homeless, poor and starving amid factional infighting among themselves, left with no means of defence against foreign aggression, and no choice but to comply with De facto rulers, A complete definition of anarchy many of SF followers don’t understand.

Another strategy used by the evil empire was its *divide and conquer * handbook.. It’s self explanatory or one could simply recall to what happened in Afghanistan, Libya, Iraq, and Syria where death and destruction prevail as of today, civilian infrastructures are gone, people were made homeless, poor and starving amid factional infighting among themselves, left with no means of defence against foreign aggression, and no choice but to comply with De facto rulers, A complete definition of anarchy many of SF followers don’t understand.

NATO Proxytute Britain is ahead in this game as FOR BRITAIN SUN WILL NEVER SET IE EMPIRE WILL STAY ALIVE AS THEY HAVE FOUND INFINITE SOURCE OF ULTRA RACIST Indian babies and babus TO SERVE THEM IE PRITI PATEL,RISHI SUNAK ETC ARE CLASSIC EXAMPLE AT POLITICAL LEVEL BUT IN THOUSANDS IN GOVERNMENT ADMINISTRATIVE SECTIONS WHO AREMORE RACIST VICIOUS VINDICTIVE TO THIER FELLOW NON EUROPEANS THAN EVEN THE anglo saxons

Go back some years and you find out who started this shit. The British apes.

Cia gimps soo fullovit,just another old wifes tale of the same old crap,spin the narrative,but the thing is most educated folks in the real world are wiser than simply turning anything into blatant lies,even if the maggot is hit,chances are by anyone other than usa,so in short theyre all fkd either way!

Lets hope Iraqi civilians get the job done in crushing many a us bases + ngos as possible=FREEDOM!

Facts are Syria Al Kaida was supported by USA because they promised only to fight in Syria.

why do you embarrass Denmark tebe jens?

This guy died of old age and cancer several years ago. This is just a desperate Americunt losers stunt as the old senile diaper clad Biden wants to deflect attention from the banana republic problems at home. There is absolutely no proof that this guy even existed.

“May God have mercy on Sheikh Ayman al-Zawahiri and accept him … and grant him the highest paradise with the prophets, the truthful ones, the martyrs and the righteous,”

When illiterate people choose people like him as leaders, it is guaranteed that Muslim countries will be governed in a bad way.

A dead man tell no tales.. meaning the secret of horrific crimes committed ordered by his masters had vanished forever with his death identical to ISIS leader Al-Baghdadi’s demise.

Biden desperately needed a “win” like Obama with Bin Laden and the “handler$” gave it to him!…

Obamba needs a big dick in his mouth !!! Biden needs a big monkey in his anus !!! and the psico mafia needs both things !!!!

Thats a nice one.

nice for jens is sodomy by Muhammad

I Want to know the military situation in the anus of the mafia Pelosi inside monkey trader !!? how many monkeys can be inside her anus ?????

How many abortions her inside anus trader can be ????

Probably he died of natural causes and the deal was to just give credit to the CIA in exchange for doing their dirty work and being left alone.

WHAT A CROCK OF BULLSHIT. Anyone remember a website called Jihad Unspun? Thats where all this BS about Bin Laden and who ever. It was a CIA website pretending to be Muslim. This guy is another fake character.

This guy only existed in a Hollywood-Langley green-screen room. How many times has he been killed, he and his supposed boss, Osama bin Laden?

they stole my photo taken 1999

EU economies withering; Russia earning 1 billion daily from oil/gas alone since 22 February 2022…our leaders either as unconscious as amerikans or under threat of assassination by CIA

very nice pic of me 20 years ago

When the old horse can do it anymore it gets shot. The tools was used and now has lost its usefullness.

Farcical. The US built this man up, let him do everything he did and now that he died (of natural death) pretend they killed him. And they call it „justice“. It doesn‘t get anymore perverse and deranged.