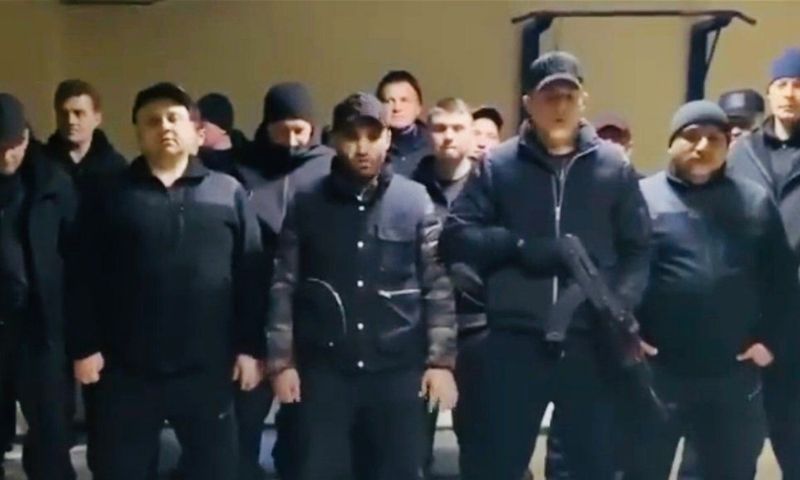 Tariq al-Jasim in the middle of his armed as seen in a video he released on February 26.

The businessman, Tariq al-Jasim, appeared in a video announcing the formation of an armed group to fight Russian forces on February 26.

Not only that, al-Jasim, who has been reportedly living in Odesa city for more than year now, is also the cousin of HTS Emir Mohamad al-Abd. Emir is an Arabic term usually used by radicals to describe senior leaders.

The Telegram channel, known as Muzamjer al-Thawra al-Suriyah, also revealed that the so-called businessman is in fact a drug dealer who used to work as a trafficker in Russia.

According to the Abkhazian Network News Agency, al-Jasim is currently preparing to funnel militants from Syria to Ukraine, where they will be thrown against Russian forces. Al-Jasim is working on this with the Turkish-backed Syrian National Army (SNA). Around 200 militants from the Sultan Morad Division and the al-Shamiya Front have already signed up. They are reportedly amassing now in the Turkish-occupied northern Syrian area of Afrin.

The Russian military kicked off a large-scale special operation to “demilitarize” and “denazify” Ukraine on February 24 following Kiev failure to implement the 2014 Minsk agreement.

Kiev is apparently planning to use al-Jasim to funnel Syrian militants from SNA factions and even HTS to Ukraine. This can’t happen without help from Turkey who controls and commands these militants. Russia, who maintains a large force in Syria, will not likely tolerate this.

Well these idiots are going to get Ukrainian civilians killed now. If they do one suicide bombing, Russia will blow Kiev out. They’re going to hide in between Ukrainians and the MSM Russia is committing war crimes

Nearly all suicide bombers are Saudi. They even have a waiting list and everything. I expect these militants to act just like they did in Armenia. A few beheadings will occur that will be completely ignored by Western media.

Its not Our fault You are not allowed to know, what we do and see.

We have seen many of them qand dont need to see alll details again and again as You do. We dont support necrofhiles as well.

Those are no hiders as well. Those are frontrunners and professional veterans in guerilla warfare as well.

I wonder why those people should kill civilians as well. Is it because they deserve it or what ?

How do You know they are idioits. Are they family to You or what?

These Syrian rebels have failed in Syria, they just want an excuse to leave. They know they’ll have NATO protection in Ukraine

Sorry, but I dont see Your points if there are any.

Its very new Nato is in Ukriane at all. Thats fatal error by the Regimes You support. You can say USA and UK is there.

If we were, Russia hardly had a single foot in there. So we are not. Thank You. You are underinformed or worse.

We have kept Minsk too. The raisins has not.

But we do sanctions almost all over and has improved them and still do, where we can. Ukriane is hostile to Russia forever.

Who imprtant in the whole world support that attack. Well number one is Assad in Syria LOL.

Isis and alciada has been operating in Ukraine on the regime side for years. Time to kill them all. Slava Rossiya.

Thats very untrue. Its more like enemies to Russia of any kind partly are Your friends.

They are already for long time in ukraine. Wahhabi pathogens that is what they are who needs to be eradicated from the face of Syria, or elsewhere. No erdogan the savage illiterate degenerate anatolian biological waste will keep you safe and protect you. You are cowards, and just may-be that you are lying.

The Chechens will gladly kill these idiots.

So far they are not even there.

They will be there.

What do you mumbling about, you illiterate imbecile?

Oh yes, they will.

With help from NATO and Israel.

In my world coward has to be related to some reason. You give none.

Nor have you for calling him a parrot. And you are a coward, because you should take thin hat and go and fight for your lovely nazi and fascists, that you disgusted only 4 days ago.

Oh yes! That is right.

Thats no surprice. For very good reasons they dont like Russians at all.

Well Ukraine will be encircled soon enough and then it will be all for naught. It’s certainly a tepid relationship between Russia and Turkey, for the benefit of the Bosphorus Strait mostly I presume, but even then there is a means to clear a way through……

Russia NEEDS to create that wedge to seperate west and east Ukraine so they can block any further infiltration of forces and encourage the Nazi’s to leave the forming cauldron.

There is no infiltration.

We try to use facts and by that has has journalists there for years and on both sides before the attack.

By that infiltration there must be in Your shoulder or something.

Now it should be clear to all why Putin intervened in Syria. He’s going to be upset he didn’t kill more of them before this. But heck, by all means, come on down. It will give the Russians another chance at you without the Pasha interfering. Take a break from the hum-drum of Syria and visit beautiful southern Ukr…maybe you could drop in on the Chechen’s for a chit-chat. I’m sure they’d love to have you.

jens holm
Reply to  based

Now ISIS has a chance to get it’s footprint back in Europe. Russia practically does not have to do anything now. Europe are digging their own grave. The U.S must be laughing at this idiots. I hope those terrorist do land in Europe, those idiots think they will target Russia? Lol

You are fare out.

In this its fine ISIS and Kaida gets killed as long at they kill the Russian spendables as well too.

NATO s a terrorist trainer – and Turkey Ukraine is its cesspit playground for terror bases.

True maybe, but when MERDolfgan shot down a Sukhoi, why Putin sold IT weapons ? Just to see the UNHUMAN HENOCIDALS in turn sell ITS bloodyshed weapons to Ukraine?

Ukraine is an independent state recognized as such by UN. They are allowed to defend themself and are helped to replace the old equipment and methods.

The Ukranian forces has been organized towards west only having short distance nukes as well.

For all I know only USA and UK is there.

Id NATO was there Russia would not be there. We have kept Minsk two as it is as well as Budapest 1994. Ukriane might not. Russia is a NOT.

Thats why Ukriane is no Nato and so far only a normal low affilitated to EU.

You are forbbidden to understand how the Western world is organized and only are infected by the bad sides we have too. You dont see whats doing pretty well

The illegal UKIE regime is a puppet of the USA and UK as you well know.