In an official statement, Hay’at Tahrir al-Sham (HTS; formerly Jabhat al-Nusra, the Syrian branch of al-Qaeda) announced that it had banned the formation of any new militant groups in Idlib Province. HTS added that the decision was aimed at maintaining the unity among various groups in the province of Idlib. 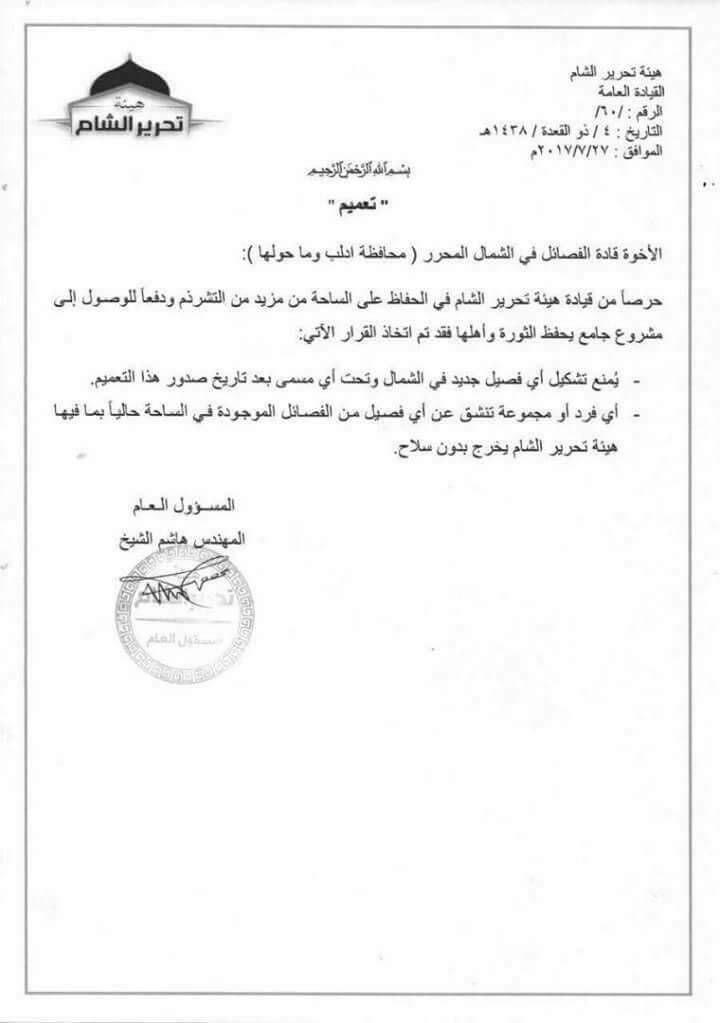 The official statement forbade any group to form a faction under any name, asserting that “any individual or group that defect from any faction on the ground, including HTS, leaves without the weapons”. HTS seems to be seeking to maintain the current situation which ensures that it remains the strongest faction in Idlib.

No group of the Syrian Free Army (FSA) or the Ahrar al-Sham Movement has commented on the statement so far.

The statement shows the sieze of HTS ‘influence in the province. HTS has became the central force that runs the entire province. It has also started imposing its will on the entire opposition groups in the province. This HTS step HTS is similar to the ISIS behavior back in 2014. HTS is now taking the same approach.

Kids in Africa
Reply to  MeThinks

History according to who you fuqtard??? Never be ashamed, No one owes you nor the world an apology

Barba_Papa
Reply to  Kids in Africa

A fair chunk of the Russians that died under Stalins rule were killed by the German army, vacationing on Soviet soil on Hitlers orders for a couple of years. Methinks that if the USSR did see as many people killed by Stalin as is popularly stated then it would have seen its population shrink. Which except for a period of a certain German invasion does not seem to have been the case. And the absolute record holder for getting the most people killed has to go to Mao.

Whatre you even talking about??? MAO??? And look where their at today.These are not questions for you to judge for your judgements are meaningless. these are issues for the Chinese themselves. To praiise or condemn, Mao can handle it, The Cinese can even flip flop if they desire/ Mao would be pleased, the humiliations of the past will not repeat

Mao killed 80M by certain estimates. Where the Chinese are today does not change that number.

Vacationing??? In your historical take how did their vacationing end, smarta$$…and you call that a vacation And where they vacationed from and all collaborator nations inbetween, how’d that work out. tardo

Vacationing was a term used by the UkroNazis online in Georgia 2008 befor their communications went black and they like all the rest were on the run towards Tiblisi or towards Russian ambush at the ports for pickup by NATO. Most effective vacationer who used that term, vacationing, were the Russians in the Donbass. They actually handled their business, gathered an immense treasure trove of trophies.

Stalin was necessary you fuqtard. I see the allies waited for Germany to commit the bulk of its Euro Nazi Nato of that time to the Eastern front

Necessary for what? Terror, massive economic waste, and worldwide subversion?

I’d love to know what the actual break-down of forces is in Ildib. I’ve heard so many contradictory statements about how many Al Qaeda vs. Unicorns.

Anyone got a reference to quote?

Hitler was contrived by Allah to give Stalin a fair go, which he got, it was Christians that screwed up and destroyed the Soviet Union Allah sort of knew they would and was ready with Islam.

Absolute BULLSHIT! Soviet Union was an ATHESTIC State u stupid rag head! Orthodox Christianity was destroyed by the Jewish funded Bolshevik coup in which Stalin was a part of! Destruction of the Soviet Union (in the eyes of Russia and other satellite nations) was a good thing! And if what u say is true “Christians that screwed up and destroyed the Soviet Union” then thats a good thing! I honestly believe that u are the dumbest person I have ever encountered on this site! We have debated before and u ALWAYS COPY AND PASTE SHIT U READ ON PRO MUSLIM SITES! Here is the history for u U VERY STUPID PERSON!

1. Bolshevik coup was funded by the Rothschild group because the Russian Tsar was gaining support for banning Rothschild central banks from Europe. Russia was the MOST diverse and liberal and rich country in the world at the time! Still to this day it has the worlds second biggest mosque! 2. Lenin, Trotsky, Marx implemented Communism so that a new Empire would be born and made to be purely a military state! 3. Communism has no room for religion! The Soviet Union were Atheists! 4. The collapse of the Soviet Union was due to corruption and financial collapse. The Chernobyl reactor meltdown and the Afghan war drained it! 5. If the Collapse of the Soviet Union was because of Christian then that is a great testament to the Christians! 6. Chechnyan Muslim rebels were ALSO FUNDED by America to force the ultimate collapse of Russia! But Putin (A DOVOUT CHRISTIAN) defeated this coup and has never looked back ever since!

Turning towards Allah? Are u serious? the western world hates muslims and islam! You know this is true! u treat women like slaves! u rule ur world with an ideology that is backward! We celebrate everyday when we know that muslims are killing muslims1 WE FUCKING LOVE IT! What sort of Religion is peaceful if it states that “if u leave this religion, u must be killed”! You know it says this in ur book of hate! You are rats! You follow a false prophet and u are all too dumb to realise it! GROW UP and start thinking for yourselves! Fucking monkey’s!

Well, I made my first speech as a member of the Australian Communist Party, 1968, I supported Stalin in opposition to what was then radicals who later turned into Trotyskists, it’s not likely I’ll ever change I never have so far, the main thing about it was the lifestyle as anti consumerism and equal opportunity, we were never really anti Religion we had to pose as that because the jews were having to proclaim atheism and it made them feel less uncomfortable if we all did, NCO’s and Officers were originally deleted from the Red Army in similar fashion but that was never serious either, my ideolgy reflects the analysis presented in “Magnetic Mountain” by Stephen Kotkin, and in general by my contemporary Christopher Read. The other thing is God might not be real, or He might choose to be hidden to protect His impartiality and preserve the meaning of Temporal life acclaimed by Fredrick Engels page 58 “Landmarks of Scientific Socialism Anti-Duehging”, atheists always believed science would provide all the answere, Telepathic Reality which I brought to Earth does that but it also probably destroys the purpose or Temporal Life so I pretend to be dumber than what I really are, just excuse me and look the other way maybe the after life is not for you, the Qur’an clearly states that only by the leave of Allah can we believe.

You proved my point AGAIN! I said: “u ALWAYS COPY AND PASTE SHIT U READ ON PRO MUSLIM SITES!”

U copy and pasted this shit AND YOU KNOW IT!

HTS and ISIS can not only survive the re-taking of Syria by the SAA , they can guarantee jobs for themselves in the coming years. All they have to do is let the U.S. know that they’re willing and able to move on to the next job site , Iran.

I doubt this would be news to them , however. I suspect the arrangements have already been made.