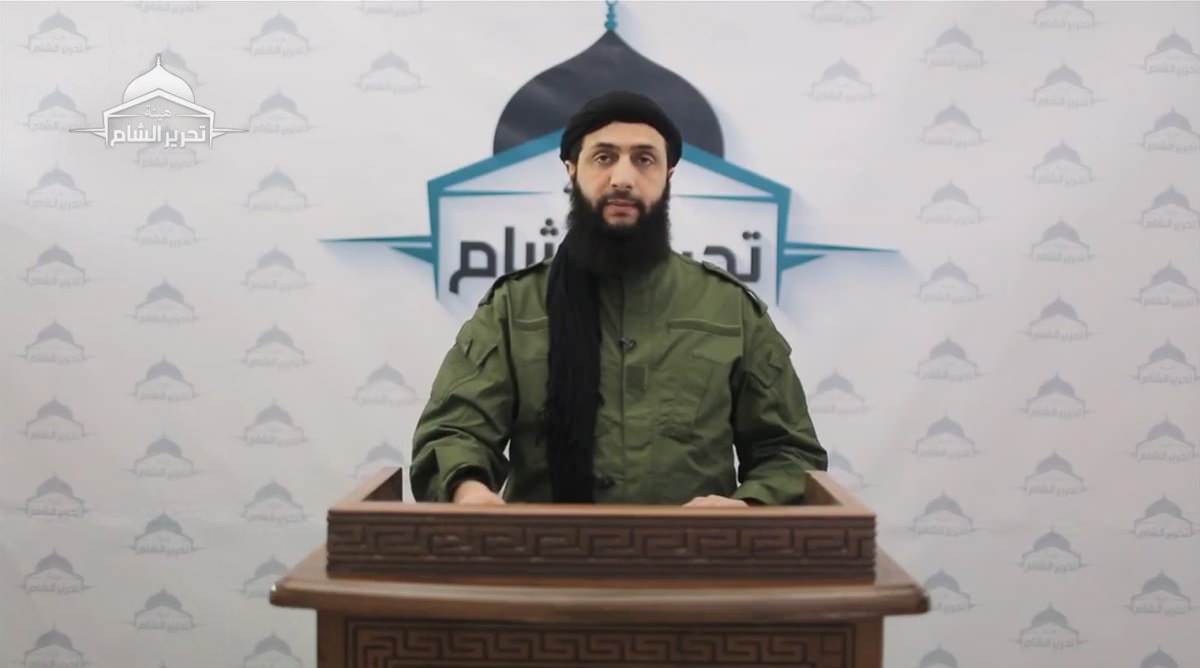 Hay’at Tahir al-Sham (HTS) [the former branch of al-Qaeda’s in Syria] will not withdraw from the demilitarized zone around Idlib, despite the new ceasefire agreement, the terrorist group’s leader Abu Mohammad al-Julani announced during an interview on August 3.

“The enemy couldn’t occupy the 20km it is talking about with force, how we would give it away peacefully! It’s within our military duty to defend the liberated areas … We will not withdraw a single soldier or a single weapon from any position, and we will not relocate to any area upon the wishes of the enemies or the friends,” the infamous terrorist told local journalists in Idlib.

Withdrawing all heavy weapons and terrorists from the 20km demilitarized zone around Idlib is the main condition of the new ceasefire agreement, which HTS had formally accepted.

Al-Julani didn’t stop by challenging this main term, but went on and vowed to recapture all the towns and villages HTS lost to the Syrian Arab Army (SAA) in the last three months, including Kafr Nabudah and Qalaat al-Madiq.

“HTS will not voluntarily agree to the entrance of any Russian soldier to the liberated areas … If they want to enter militarily we will have the honor of repelling their advance attempt, as we have done before thanks to God,” al-Julani said commenting on any possible Russian patrol within the demilitarized zone.

Throughout the interview, al-Julani ignored HTS’ heavy losses and attempted to portray the new ceasefire as a victory for his group and its allies.

Al-Julani’s remarks indicate that HTS and its allies are no willing to honor Sochi agreement, which is the main base of the new ceasefire. Furthermore, his threats could lead to a new escalation around Idlib.

Hmmm, I think we need more ceasefires. Perhaps if the war lasts for a million years the terrorists will grow tired and peacefully leave. … Well nice of them to make it an official statement!!!! Instead of formally agreeing and then not doing it, now they are even formally saying they won’t do it!

well Putin now Looks openly as a traitor that Insiders know all along..Putin is a Zionist pig.period.

ceasefire with them????? on over a dozen occasions?? demilitarized Zone with These Folks????

there are opnly 2 possibilities

Putin is plain and simple stupid or

he is a traitor following a different Agenda……

every fucking single time SAA has them jihadi foreign backed assholes cornered in like in aleppo,douma,quinetra Putin Comes along with a evacuation Agreement Hand in Hand with a Reconciliation Agreement…….those that decided to leave for Idlib, as i predicted months over months ago will be SAA new enemies in time to come…well that one turked out more than correct..secondly ..those jihadi that took the Reconciliation Agreement are now spreading havoc in those territories in so called slepper cells…as predicted too months over months ago. I dont have a magic eye just a brain to use for common Logical thinking….

1. one can make Peace with other state actors..has happened many times on our planet, but how the fuck does someone make Peace with Folks that have a sick religious ideology, were anybody not seeing the world and Religion as they do has to die because he is the enemy of their highest religious believe??? wont happen.period.

Right now, as i have written here time and again, is the bleeding out of SAA….in a war of Attrition,blood and Tears together with a defacto Embargo from the inside and outside of Energy resources for syria.

Add to that the Weekly bombings of Israel, that occupys as invading force the west of syria-gloan heights, with absolutely Zero reprecussions on the side of SAA or their so called Partners Russia.

Add to that the turkish Invasion of North syria with the Sponsorship and green light by Putin. Add to that the occupation by NATO Forces in the east with a defacto kurdish minination ala Kosovo with US Leadership.

Add to thatthe occupation of south syria by US Forces and jihadi Forces trained and armed and protected by US airforce.

Exactly These FACTS led hezbollah to retreat back to lebanon……….

it was his brother BASIL that was supposed to become president of syria…he was well trained in the army and security services….at the time off his death he was commanderof the repbl. guard and in the upper Levels of state security…..he got assasinated through a “car accident”……where was his brother bashar all the time.. Bashar lived in the lions den LONDON… for years……..

ps. who was the pusher or syria to gice up their chemical weapons????? it was Putin……did it help???no false flag chemical atatcks are common preactice ins yria and Always get blaimed on the Government although they gave them away.

NEVER ever would basil or their Father ive up their chemical weapons…..why should they?? USA has them, ISRAEL has them, SAUDI ARABIA has them……..a very bad mistake strategicly by poltical Leadership………These chemical weapons were Always the Survival “Joker” for syria to be used against Israel int he worst case Scenario……….now????

syria is partioned to the North,west,east and south…..attacked by all on a daily Basis…..is their spo called russian Partner helping?? seriously ? where??? well SAA capturing Idlib back is af if man will walk the Jupiter tomorrow….they cant even manage to get n.hama back or Latakia to the full…..

is Russia helping against the illegal occupation by the USA in the east and south????any no fly Zone for illegal US airfoce??? no? any help to recapture altanf where approx. 70,000 syrian women and Kids are beiing Held hostage under inhumane conditons???yes?no???

any help by Russia to stop the illegal Weekly bombings by IDF on SAA Forces????yes???no????

any reprecussions by Putin after the turkish bastards downd their russian planes and murdered/executed their pilots??? yes?? no??? ohhh sorry Turkey got the S-400 as a Penalty..lol….

any reprecussions for Israel after a dozen russian offficers were murdered by IDF startegy on SAA bombing??? yes??no??? well 45 days later Putin and bibi were all smiles at their Meeting….

why did all united nations security council memebrs vote yes to the arms Embargo against the houhtis while at the same time selling the most Advanced weapons to the invading and occupying Forces(China,france,usa,russia,uk)

why did all united nations security council memebrs vote yes to a no fly Zone over lbiya which defacto was a death Penalty for the gadaffi Government???(China,france,usa,russia,uk)

the agenda a one world Government with Jerusalem as its capital under satanic jewish leaderhsip. all nations RECOGNIZING the illegal satanic Entity named Israel are part of the Agenda, this includes USA,russia,china,uk,eu, etc…

The ceasefire gives time for Russia and Syria to resuply their inventories and give the moral justification for the government next operation, since they tried to make peace again. The relocation was a sucessful strategy that liberated the rest of the country to function again.

Abtin Do
Reply to  klove and light

looks like a several-weeks old post of mine,to the letter. Sadly,I concur on basically every single argument mate…

1 – a certified failed state,with a badly weakened and wholly dependent central government with no viable source of income,40% of its territory de-facto colonized by a international occupation force carving a pro-western Kurdish quasi-state funded by Saudis and local oil-deposits and infrastructure, supprted by US military garrisons and growing airbases on top of a Mossad training and ibtelligence center as deep as Tabqa.

2 – no military sovereinty to defend its skies for its historical arch-enemy Israel bombing it completely at will all the way up to its very capital, with overt blessing from its supposed “Russian ally” which is also in parallel making crazy lucrative deals with thel and the Turks at the north with Syrian land as bargaininship at the same time.

3 – A ludicrous series of endless back and forth game of semi-advances ruined by Russian-sponsored dummy ceasfires that never make any political or military sense other than giving incentives to non-Syrian (and anti-Syrian )partners of Putin trying to negotiate their agendas with him on a regular basis.

Ever since the Vlad fired Sergei Ivanov from his post out of the blue a few years back,we have seen an increasing number of amateurish and badly calculated moves adopted on every front by the Tsar. Indeed, they all seem geared towards hasty and inconsiderate early wihdrawals doubled with political wishful thinking that only benefit its enemies and never its allies,and which seems to be moving blind through geopolitical realities that seem beyond him without support from old post-Soviet dinosaurs like Ivanov and his all-imprtant councel , proved by his winning doctrine that once made them earn big in Georgia and Crimea. Russia is on a dangerous self-inflicted path and will loose every of its long-term investments in the middle-east if its leader keeps its current course and so desperatly tries its hand at obtaining impossible diplomatic agreements from antagonist “partners”, which amounts ot beliving in unicorn.

Putin seems to be favoring every single of its field allies’ adversaries ,forgetting that anythingvhe cleared as facts pn the ground namely in Syria and even Iraq is the fruit of heir participation and cooperation back in 2015. He turned the whole emerging pole of efficient ,alternative influence into one of mutual-distrust and unpredicatble U-turns,without the West moving the finger !

Excellent. That’s exactly the response Turkey, Syria, Iran and Russia were hoping for. Now clear them out by force.

Everybody knows that who finance you and whose agenda you work on.

Now that’s out of the way, can the SAA and Russians get going?! Or if its just to appeal to the Turks, just give them the impression of honouring the multiple ceasefires BUT continue on with offensive operations. It’s not like the Turks aren’t screwing with them by ‘honouring’ these ceasefires themselves.

Why is Israel rescuing their White Helmet/Israel Secret Intelligence Service Operatives, over in Syria?

Faux Humanitarian Irwin Cotler, the White Helmets, and the Whitewashing of an Appalling Agenda Cotler’s campaigns for foreign regime change or intervention almost always march in lock-step with neoconservative U.S. foreign policy. His “humanitarian” branding is but a thin veneer of hypocrisy to conceal his establishment policies — policies that almost always serve the interests of Israel.

As if we didn’t know he will say that. One again (and it will be documented) – opposition asked for ceasfire and it was given to them and they don’t adhere to it. Once again they will get what they asked for – FAB500 it is.

after having discussed the situation with the dysfunctional states of A and the squatters. finish the squatters illegal occupation of palestine and no further issues of this kind will arise.

In all fairness, HTS was never a party to the Sochi talks–nor was Syria for that matter. Anyway, clear is best. Now what are the loyalists (if they’re still loyal enough to call them that) going to do about it?

Then you will die where you stand.

The proof that Al-Julani is a Mossad agent is precisely because he swears the false. Any Jew who recites the Kol Nidre would do it. ?

who gives a shit “al julani”, SAA and russia will come kill you and bomb the shit out of you and your shithadists REGARDLESS

After this new ceasefire, this guys will need another ceasesfire to be able get better weapons and organization from Turkey friends. Of course, Russia will stop any SAA full offensive at Idlib

HTS is terrorist organization and as such it was excluded from every single ceasefire. While “moderate opposition” can “rest”, HTS is and will be targeted. This HTS creature saw horse getting horseshoe, so decided to put his frogleg to get the same.