Late on May 6, a joint force of the U.S.-led coalition and the Syrian Democratic Forces (SDF) carried out a sensitive security operation in Deir Ezzor.

The operation, which targeted ISIS cells, took place in the town of al-Zawr in Deir Ezzor’s southeastern countryside. The SDF imposed a curfew in the town, ordering civilians to stay in their homes during the operation.

According to local sources, at least five helicopters of the coalition supported the operation. The helicopters engaged several targets on the ground, which is highly unusual during such security operations. 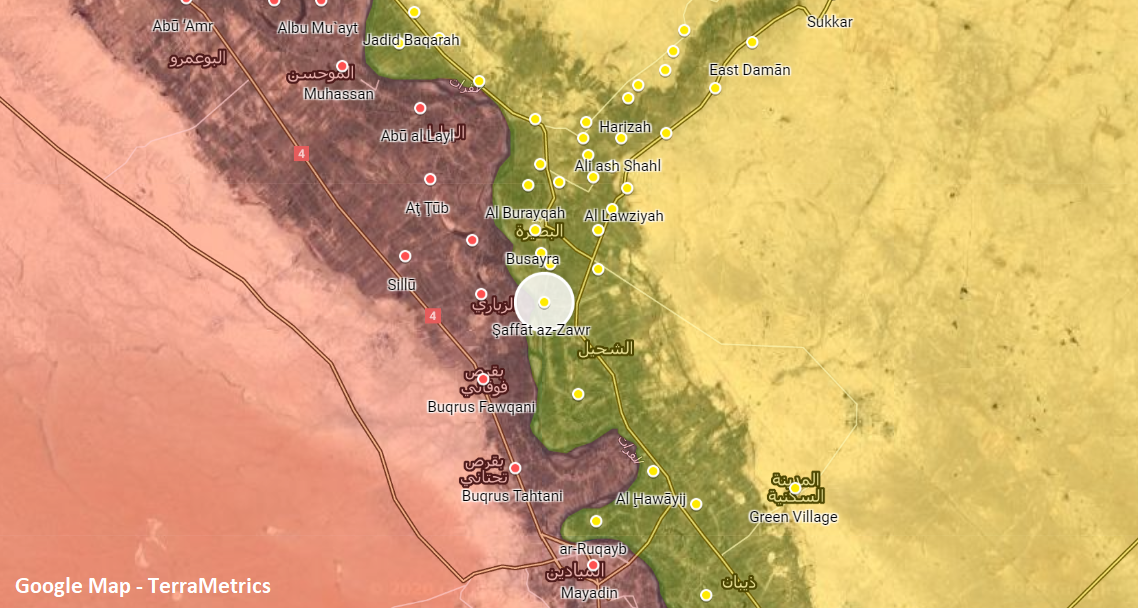 Special forces stormed several houses in al-Zawr following heavy clashes. At least one person, reportedly an Iraqi ISIS commander, was arrested. Two others blew themselves up after being approached by special forces.

ISIS cells in Deir Ezzor intensified their operations in the last few months. SDF personnel in the region were targeted on a regular basis.

In response, the U.S.-led coalition and the SDF carried out a series of security operations in the governorate, especially in the southeastern countryside. The recent operation al-Zawr is the largest, so far. The operation likely targeted a high-ranking commander of ISIS.

ISIS ‘operations’ are small hit-and-run affairs. Seems to be for show more than anything else. Something that CENTCOM might warn the world about as the resurgence of ISIS! So, obviously, the US needs a few more brigade combat teams in Syria… at the oil fields.

This was surely true for some time, but sadly in the last days/weeks ISIS is striking like they had not for years. But mostly in the Desert region connecting East-North Syria and Deir Ezzor Region. Especially in Iraq the PMU is now building up and deploy their forces, with quite big engagements with often heavy loses on both sides. ISIS seems to take advantage of Corona, and the still unsolved political and economic crisis in Iraq, and less so but also in Syria. Also US had just suspended all intelligence sharing with Iraq, just when ISIS began their push. Without drones and satellites, Iraq is now pretty blind and do have no good means of observation. Iran or Russia would love to fill the void, but this would enrage the US into sanctioning Iraq like Iran, and most Iraqi politicians, the sunni, kurds and many Shia factions do fear this, and want a balanced relationship with both US and Iran. Which the US will never agree too with the Donald , Reps and Neocons. Or most Democrats for that matter. There is no easy solution, and Iraq will only continue to become an even more failed state in the near and middle term future sadly. I too had not thought they still could pull this of weeks ago. But it is true. Elijah J. Magniers latest reports give great detail, which has been underreported sadly in MSM and Alt. Media. But sadly ISIS is on the rise again, at least what concerns

1) “The goal of the First Lebanon War was to bring down the Hashemite Kingdom of Jordan and turn the country into Palestine, former Israeli Prime Minister Ehud Barak has said in a shocking admission about the true intention of the Zionist state.

Israelis were told that the objective of the 1982 invasion of Lebanon was to remove forces belonging to the Palestinian Liberation Organisation and end the threat posed by the resistance group to its northern communities. Barack admitted that this was untrue, explaining that the real goal was to use the “pretext of Palestinian terror” to force the PLO back to Jordan where they would take over government from the Hashemite Kingdom.”

2) PressTV: “Meanwhile, Mahmoud al-Rubaye, spokesman of Iraq’s Asaib Ahl al-Haq group, which is part of the Hashd al-Sha’abi, said that the US has long been supporting terrorists in Iraq and Syria and that Daesh is part of Washington’s scheme to disintegrate the region.

The US, he added, plans to settle Palestinians in western Anbar under President Donald Trump’s self-proclaimed “deal of the century.”

Stealing Syria’s oil for a Syrian Kurdistan seemed strange, since we already sort of back-stabbed them. There is no real SDFistan political entity to prop up. But ‘settle Palestinians in western Anbar’? DING DING. They’ll need to eat, so ‘entice’ them with the stolen Omar oilfields and future pipeline fees extracted from iraq. Palestinian final solution (2020 version).

See why the US needs Ayn Al Asad Air Base? ISIS placeholder commanders being weeded out now and replaced by CIA-fed ISIS commanders who will ‘step aside’ for the Palestinian refugees once Israel finally drives them out at gunpoint.

Thanks for the Ehud Barak quote, this is quite a find. And extremely revealing.

Luckily it seems the “deal of the century” will have no effective chance to move into reality. The incompetence of Kushner and Trump will make sure of it. But we will see how things may change, as Trump is now even more indebted with his Zionist sponsors for the election. This may force his hand, and even though the Kushner plan has no basis in reality, even its further existence and proclaimed intentions and new push could still let the region slide into further crisis. What a fucked up year. And even more fucked up and sad outlook into the future.

Agree – little chance of success with this hairball scheme, and Kushner’s involvement guarantees that. This isn’t really a Kushner plan, though. It goes all the way back to Bush and Cheney and the Blood for Oil pipeline. If Iraq won’t sell the Israelis oil, then create a new country between them to do the job. Kurds were too far north and blew it with the independence declaration. Iraq has gone off the farm lately. Deal of the Century is probably version 13.0 of another endless attempt to crowbar this fantasy into reality. There will be another version after this one. Deep state has always been full-psycho about West Anbar/Eastern Syria – I’m just scrounging for something that explains it. We damn sure don’t need the oil for ourselves (US).

The US knows exactly where Isis is coming from and also knows how to stop them, just look at where they’ve placed all their control points, they all face south across the river, they know exactly where the Isis breeding nursery is.

ISIS crisis!!! Rubbish. These people could be anyone, including local resistance against SDF/US occupation. SDF propaganda or US military can call them whatever they want. To the public it’s always ISIS. Believe it if you will but I call it a sham. Until they show photos AND video comparing to historical photos of the same person in charge of Daesh units it’s all taken on faith by most people, but like always it is almost certainly misdirection.