It appears that arms continue flooding the Middle East through some apparent “gray area” schemes.

In 2017, a Bulgarian investigative journalist, Dilyana Gaytandzhieva, reported that at least 350 “diplomatic” Silk Way Airlines (an Azerbaijani private company) flights transported weapons for war conflicts across the world over the last 3 years. The airline exploited a loophole in the international aviation and transport regulations to offer flights to arms manufacturers and private companies – with much of the cargo heading for known terrorist enclaves in Syria, and also to other conflict zones including Central Asia and Africa. Under the International Air Transport Association (IATA) regulations, the transport of military cargo by civil aircraft is not allowed. To get around this legality, Silk Way Airlines applied for diplomatic exemption for aircraft and their cargo (diplomatic charter flights), through local agencies to transport heavy weapons, ammunition, and white phosphorus across the world to several war zones such as Iraq, Afghanistan, Pakistan, and Syria, as well as to African countries like Congo and Burkina Faso.

The leaked documents show that more than 20 Silk Way flights could have potentially carried arms from manufacturers in Central and Eastern Europe for Middle Eastern states on behalf of non-state actors fighting in Syria. If the documents were, in fact, accurate it would also corroborate an investigation by the Balkan Investigative Reporting Network and the Organized Crime and Corruption Reporting Project (BIRN/OCCRP) into the illicit arms trade between Europe and Syria. That report also implicated Silk Way.

Despite the existing evidence, Silk Way Airlines pretended to be not involved in any kind illegal or “gray” acitivites. The company’s website contains the following article:

With reference to recent articles in the media and particularly an article published at the Wikipedia – The Free Encyclopedia web site, stating that the operator, Silk Way Airlines from Azerbaijan has been involved in illegal transportation of weapons for terrorist organizations from/through Bulgarian territory, the Directorate General “Civil Aviation Administration” to the Ministry of Transport, Information Technologies and Communications of the Republic of Bulgaria would like to clarify the following:

All flights operated by Silk Way Airlines from/through the territory of Bulgaria, carrying special/military production on board, have been performed in accordance with all National and International regulations and legal provisions, with all respective permits, certificates and documents for transportation by air of such a type of sensitive cargo. Without any exceptions, Silk Way Airlines strictly adheres to all IATA and ICAO regulations for safe transportation of Dangerous Goods by air. The operator and the shipper of the cargo of each and every flight have been duly disclosed in a legal order, representing the origin, the route of the flight, as well as the consignor, consignee and the end user, by legal documents.

There is no room for tendentious speculations, that the cargo transported on board has been intended for known terrorist enclaves in Syria and other conflict zones in Central Asia and Africa. All flights have been operated under the strict control of the Directorate General “Civil Aviation Administration”, as well as under the control of a number of other National and International authorities responsible.

However, the fact is that in 2018, Silk Way Airlines flights to conflict zones in the Middle East and the Central Asia continued.

In the period between November 21st and 25th, Silk Way Airlines conducted numerous cargo flights from Baku (known as one of the logistical hubs for weapons deliveries to conflict zones) to Kabul and Baghdad.

On November 21st, both and IL7 and a Boeing 74Y carried out deliveries at 2:30 PM and 2:40 PM respectively, evidently at the same time, from Baku to Baghdad.

The IL7 delivery also happened on November 17th and 18th, as archives show on a flight radar website.

The deliveries also took place on November 24th and 25th, only by the IL7, the Boeing 74Y appears to be used more seldomly in Baku-Baghdad flights.

Silk Way Airlines also carried out cargo flights from Baku to Kabul on November 22nd and November 24th via an IL7.

Furthermore, there were several regular flights by Taquan Air and Alaskan airline to the conflict zone in Yemen. What is an Alaskan airline doing carrying out cargo or passenger flights between Djibouti and Aden comes down to speculation. The aircraft used was a 72F freighter, as we as a Fokker 50 plane, which is commonly turned into a cargo plane from a passenger one.

The 72F freighter carried out a delivery on November 22nd. 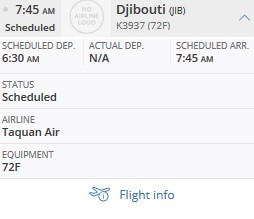 While the Fokker 50 plane made a delivery or a passenger flight, it is uncertain which it was on November 23rd. 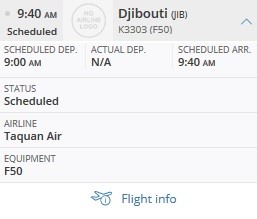 In addition to that Flexflight, a Danish company also carried out one passenger flight from Djibouti to Aden on November 22nd. 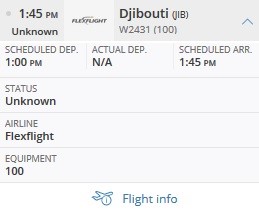 The nature of the Djibouti-Aden flights is unclear. However, considering that Aden is currently a “capital” of the Saudi-backed government of Yemen, which does not control the real Yemeni capital of Aden, it could be possible that the acvitiy of these companies are somehow linked to activities of the Saudi-UAE-led coalition, which invaded Yemen in 2015.

Furthermore, the security situation in Aden itself remains very complicated. Various coaliton-backed factions clash each with others as well as ISIS and al-Qaeda attacks appear there on a cosntant basis. So, Aden is not a popular tourist airport

It is a CIA run airline like the Saudi owned Citibank that finances Wahhabi terrorism. Silk Air is operated and run by CIA and hires ex-US and UK military pilots. Its planes are routinely seen in Pakistan, Dubai and Cairo. It is the main conduit for running Saudi and Emirati paid weapons to the headchoppers from ex-Warsaw pact military stocks in Bulgaria, Romania, Croatia and Poland. It has a main terminal at Ben Gurion airports logistical area. The livery on the same aircraft is routinely changed with new exotic names and most are registered in Bulgaria, Romania and Poland.

Air America, by any other name would still smell of yankee dog.

Bulgaria is the biggest CIA terrorist base in the Black sea region and Silk Air is a con name for a CIA run arms trafficking airline. It has also been seen at Kabul and Bagram airports airlifting the headchoppers from Syria and Iraq. Its planes need to be intercepted and brought down.

Why don’t you intercept them, keyboard cowboy?