On February 19, the Ahrar al-Sham Movement and the Nour al-Din al-Zenki Movement announced in a joint statement that they are merging their forces to form a new armed group in the Syrian governorate of Idlib. The name of the group is the Syria Liberation Front (SLF). 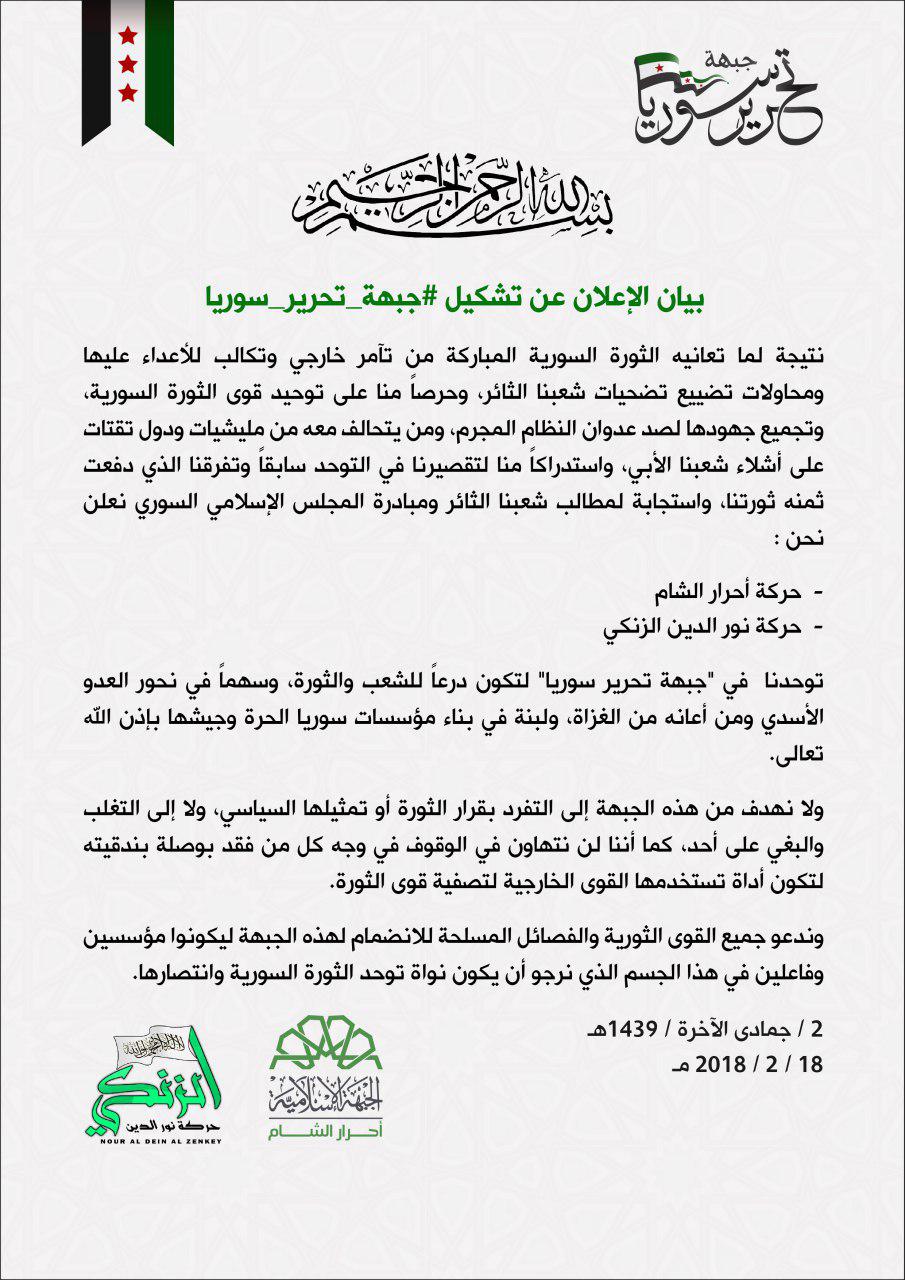 According to the statement, the SLF will fight the Syrian Arab Army (SAA) and its allies. However, Ahrar al-Sham and Nour al-Din al-Zenki stressed that the SLF will also stand against anyone who works against “the revolution’s forces”.

According to Syrian opposition sources, the SLF will be led by Jaber Ali Basha, a senior commander of Ahrar al-Sham. These reports are yet to be confirmed by the SLF.

Ahrar al-Sham is considered a terrorist organization by several countries including some US allies like Egypt and the UAE. On the other hand, Nour al-Din al-Zenki, which used to receive support from the US, is also well-known for its numerous war crimes, especially during the Aleppo battle in 2016. These war crimes incident include the public beheading of an ill Palestine minor.

Some Syrian opposition activists believe that the creation of the SLF is an attempt to counter the influence of Hay’at Tahrir al-Sham (HTS) in Idlib governorate. The decision to form the SLF was even taken to stop HTS from launching a large attack against Nour al-Din al-Zenki, according to this version.

HTS openly accused Nour al-Din al-Zenki of assassinating its Egyptian scholar “Abu Ayman al-Masri” on February 17 and even threatened on to conduct direct actions if al-Zenki refues to hand over the killers of al-Masri.

The FLS will not likely be able to counter the influence of HTS in Idlib governorate, as the majority of the foreign fighters and religious scholars there are supporters of HTS. Some local sources believe that HTS will be able to defeat the SLF within days in any future military confrontation, the way HTS had defeated Ahrar al-Sham and Nour al-Din al-Zenki many times before. However, even in this case, the creation of the SLF is a threat to the HTS influence.

I Remember you…. you people behead little Kids!!! They’ll come for you to avenge him, my Demonic Brothers!!! They’ll chop you up…..

Death to Al-Zenki, hopefully they take out some HTS rats

Death to Al Zenki and all Wahabie vermin.

I have sometimes wondered, should those gleefull headchoppers be treated the way they treated others?

Jaysh Al-Hurr (Free Syrian Army) has already been defeated in Idlib and it doesn’t stand a chance against the Nusra Front. Though I do think for civilians sake they should try to convince SLF to fight Nusra before the SAA comes in and rescues them from certain persecution. But overall, I don’t see a difference except for the Flag.

They may count on the US overt support like the one YPG gets. But i wonder since the Turks fight the YPG it’s obviously possible for another dogs can’t get along with the one they’re keeping.

Hopefully this will make it easier to find these murdering baztards.

It doesn’t matter how much you polish a turd, underneath the shine there’s only shit.

Ok so I know this ain’t a “joint ops room” but I still think it counts as a shot of whiskey in the drinking game!

* raises glass and knocks back a strong one*

In all seriousness: terrorists joining terrorists too fight terrorists to then fight the SAA, fuck a few goats, behead a couple of kids, stage a gas attack and finish off with a cup of tea at Ali’s snakbar! There literally trying to give themselves a reason to exist especially as public support for these groups has wained over the last couple of years after showing there true colours, extorting, kidnapping and press ganging youths into there so called units. People are fed up and just like the did against nusra they will rise to denounce them!

Someone needs to tell these primates and their US handlers that changing names after getting their asses kicked doesn’t count as a ‘do over’. Nothing is reset. They don’t become a fresh, new undefeated rebel group. They’re just the same old has-been head-choppers that will continue to get their asses kicked again and again. Swapping flags is never going to change that, regardless of what their CENTCOM bosses tell them. The war is over for you, head-chopper. Find yourself a nice goat and settle down.

Fine yourself a nice goat and have kids !!!

The result of bestiality is … kids… mmm.. Oh dear everyone with kids has a lot of explaining to do…

as
Reply to  Pave Way IV

Well they may aiming for US (dirt)money. Last time they couldn’t get them because it’s name.

“The war is over for you” <- unfortunately, proclaiming this does not make it so. Yes the moderates got a couple of beatings, and last month in the Idlib-Hama-Aleppo offensive the headchoppers were losing several villages per day. The headlines spoke of their defenses collapsing, and loyalists were already seeing themselves in Saraqib, with even Idlib city being just a matter of time.

That wouldn't do of course, so the offensive was stopped long enough for Turkey to establish observation posts all over the place. Now depending on the day of the week, Erdogan may mumble something about Syrian territorial integrity, but where the Turks come they plant their flag in the ground–guess which one signals their true intentions. Seems like the headchoppers were bailed out, and now in Idlibstan they can continue to squabble among themselves and take potshots at the SAA, all quite similar to the US and Israeli enclaves elsewhere.

True. The US effort now is just to prolong the fighting and destruction in Syria as long as possible – the Syrian people must be punished for not living on their knees under a US/Saudi/Israeli installed puppet government. If they can’t be controlled, then ensure enough endless chaos and destruction in Syria that it will never be a threat to US/Saudi/Israeli interests. Unfortunately, US psychopathic neocon death-cult ideology is as persistent as Saudi Wahhabi death cult ideology. True believers of either one will never give up – it’s all they got.

SLF, another stupid acronym to add to other 100 they’ve invented to hide their afilliaton with alqaida.

Looking forward to this boom!

Let’s hope that the terrorists will kill each other…