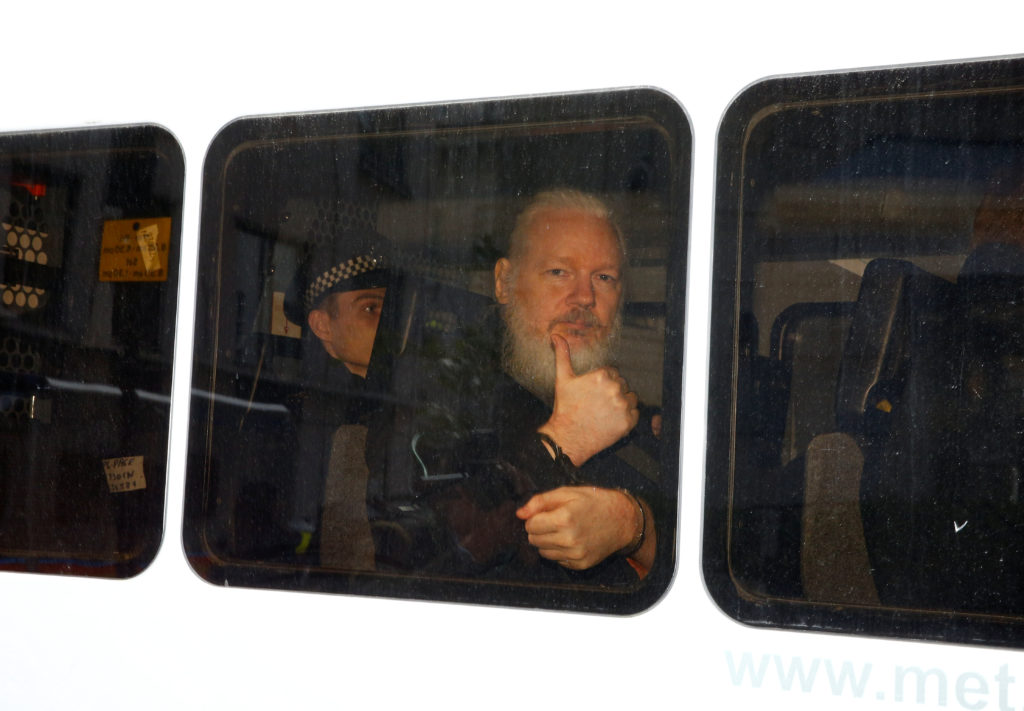 Britain is one of the worst countries in Western Europe for freedom of the press according to a global study by advocacy group Reporters Without Borders (RWF). Britain is ranked 33rd out of 180 countries.

RWF pointed to a number of worrying developments in Britain including national security laws, mass surveillance of the population and data protection.

The report mentions the case of two journalists from Northern Ireland who were arrested 31 August 2018 on the charge of allegedly stealing confidential documents from the Police Ombudsman for Northern Ireland (PONI) that related to the massacre of 6 men in County Down in 1994 widely known as the ‘Loughinisland massacre.’

The case of journalists Trevor Birney and Barry McCaffrey has obvious parallels with that of Julian Assange locked up in Belmarsh maximum security prison. In both cases powerful states seek to silence truth seekers who have exposed either war crimes or state collusion in murder.

Journalists Trevor Birney and Barry McCaffrey made a documentary about the massacre of 6 Catholics watching Ireland play Italy in the World Cup on 18 June 1994. Two terrorists from the Ulster Volunteer Force (UVF) entered The Heights Bar and sprayed 60 bullets into the crowd killing six. The massacre led to an upsurge in sectarian murders across Northern Ireland.

Over the next two decades a police cover up of the massacre became very apparent. Over 20 people had been arrested and none charged, police evidence and key documents had been destroyed. The first Police Ombudsman’s report, which denied there was any collusion between police and the UVF killers, was quashed by Belfast High Court in 2012. It ordered a new Police Ombudsman carry out a second inquiry into the massacre.

In June 2016 the second Police Ombudsman’s report was published. The Ombudsman, Michael Maguire made it very clear that there had been massive failings in the police investigation into the massacre:

“My conclusion is that the initial investigation into the murders at Loughinisland was characterised in too many instances by incompetence, indifference and neglect.’’

His report noted the links between the UVF terrorists and the Royal Ulster Constabulary that led to the killers being tipped off by a police officer that they were about to be arrested.

Maguire details the open collusion between anti-terrorist officers in Special Branch and terrorists in the UVF:

“It is of particular concern that Special Branch continued to engage in a relationship with sources they identified in intelligence reporting as likely to have been involved at some level in the Loughinisland atrocity. If these individuals were culpable in the murders they took every opportunity to distance themselves by attributing various roles in the attack to other members of the UVF. The continued use of some informants who themselves were implicated in serious and ongoing criminality is extremely concerning.’’

The families of those massacred have repeatedly made the charge that there was collusion between the RUC/Special Branch and the terrorists in the UVF that enabled the killers to get off scot-free.

In the section of his report dealing with collusion the Police Ombudsman made the damning assessment:

“Many of the issues I have identified in this report, including the protection of informants through both wilful acts and the passive ‘turning a blind eye’; catastrophic failures in the police investigation; and destruction of exhibits and documents are in themselves evidence of collusion as defined by Judge Smithwick. When viewed collectively I have no hesitation in unambiguously determining that collusion is a significant feature of the Loughinisland murders.’’

Following the devastating conclusions of the second Police Ombudsman’s report into the massacre no one has been arrested for the killings. Yet, the British authorities have arrested two journalists for making a documentary No Stone Unturned about the massacre.

In 2016 Barry McCaffrey commented on the purpose of the film he was making with fellow journalist Trevor Birney:

“ …it looks at the issue of how the state’s policy of protecting intelligence and informers was prioritised over the families’ rights to natural justice and bringing killers to courts. The Police Ombudsman’s report came out in June and it has confirmed the fact that there were informers in Loughinisland. While the Ombudsman’s report gave us much more answers we feel there are still unanswered questions there and that’s that this documentary is about.”

No Stone Unturned was released in November 2017 and made a number of allegations  such as Special Branch had prior knowledge of the attack, that the weapons used in the massacre were later used in other killings, and most damning of all it named the three suspected killers. One of whom was a former British soldier while another was a police informer.

In this situation you might expect the police to act upon fresh evidence that names the killers who massacred six people. Of course, we are dealing with British justice here and instead the British state has gone after the journalists who had the temerity to unmask the public identities of the killers whom the police protected and colluded with over many years.

Last August over 100 police officers arrested Trevor Birney and Barry McCaffrey and seized their computers and piles of documents. The charge of theft does not stand up as the ‘stolen’ document from the Police Ombudsman of Northern Ireland was leaked to McCaffrey in a brown envelope left on his doorstep.

Since their arrest under caution Birney and McCaffrey have applied for a judicial review of the legality of their arrest and have also taken their case to the European Commissioner For Human Rights.

Rebecca Vincent UK Bureau Director of Reporters without Borders has condemned the arrest of Birney and McCaffrey on the spurious charge of stealing confidential documents  from the Police Ombudsman for Northern Ireland:

“We are concerned by the arrests of Trevor Birney and Barry McCaffrey in connection with confidential source materials used in their journalistic work. Investigative reporting in the public interest must be protected. The charges against the two journalists should be dropped and the seized materials immediately returned”

Alex Gibney, the director of No Stone Unturned who worked with Birney and McCaffrey to produce the film has, has observed that the journalists’ arrest, “was an act of intimidation in trying to both silence us and also to silence journalists in the future.’’

Gibney has stated that the language in the request for the arrest warrant is highly revealing of how the British state sees whistle-blowers and journalists seeking to expose government crimes:

“I would say that the answer is yes. This is a shotgun fired at a small group of crows — me, Barry and Trevor — in order to prevent other crows from landing in the yard of the UK police or the UK government.’’

Let us hope that Birney and McCaffrey are successful in obtaining a judicial review of the arrest warrant, that the charges against them are dropped and that their confiscated items are returned to them.

The arrest and imprisonment of Julian Assange merely continues a tradition of repressive activity by the British government against journalists who seek to expose state crimes. We should all redouble our efforts to obtain his release from prison and pressure the UK government into opposing the American extradition warrant.

The cases of Birney, McCaffrey and Assange all reveal how powerful forces in the British establishment want to silence truth seekers who challenge its power and that of its U.S. ally. It also wants to send a chilling message to anyone else considering the pursuit of truth that may expose government crimes.

In his novel Nineteen Eighty Four George Orwell warned us that dictatorial governments wanted to instil fear in people  to such a degree that they accepted without thinking a  world where fear, repression and state sponsored murder were the norm. The attempts by the British and American governments to repress truth tellers is summed by Orwell’s adage, “Who controls the past controls the future: who controls the present controls the past.’’

Britain should be put on list is number 1 because it has arrested a journalist who have evidence and speaking truth.Assange have expose world conspiracy and double standard of so call destructive superpowers.

Meanwhile all who deny the holo”caust” religion are “liars”, despite all the hard work and the extensive research done by Ernst Zundel and several others on the subject.

The attempts to silence journalists is directly proportional to the crimes the state is involved in.

Assange was a Mossad controlled asset. Still waiting for the Israeli cables that he promised back in 2010. Oh and when are you going to release the 911 documents showing Israel’s role in the greatest modern day false flag attack?