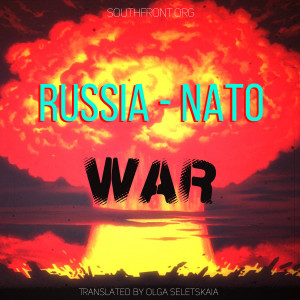 Following no progress in diplomatic efforts of Russian and Western officials, the sides turned to their military power. Under the pretext of the alleged Russian invasion in Ukraine, NATO claimed putting its forces on standby and sending additional warships and fighter jets in eastern Europe.

According to the official statement released by NATO on January 24th, in the past days, a number of allies have made announcements regarding current or upcoming deployments.

It was added that the United States has also made clear that it is considering increasing its military presence in the eastern part of the Alliance.

At the same time, the New York Times cited administration officials claiming that President Biden is considering deploying several thousand U.S. troops, as well as warships and aircraft, to NATO allies in the Baltics and Eastern Europe. The options include sending 1,000 to 5,000 troops to Eastern European countries, with the potential to increase that number tenfold if things deteriorate.

According to the report, the move would signal a major pivot for the Biden administration, which up until recently was taking a restrained stance on Ukraine, out of fear of provoking Russia into invading. 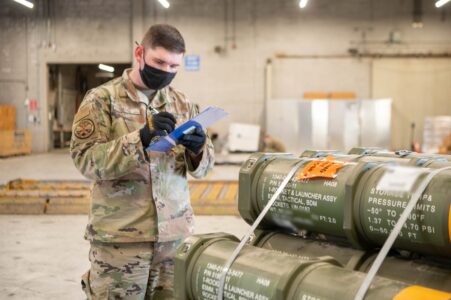 Loading of a batch of M141 BDM SMAW-D single-use grenade launchers at the US Dover Air Base (Delaware), 01/21/2022. Judging by the visible factory number, the weapons were made in 2011 Mauricio Campino / US Air Force

The U.S. “restrained stance” included the recent transfer of two batches of military equipment to the Kiev’s regime.

On the morning of January 22 and evening of January 23, the first two batches of an additional package of urgent US military assistance to the armed forces of Ukraine ($ 200 million), which was approved by US President Biden in December 2021, arrived at Kiev’s Boryspil airport. Shipments of military cargo weighing 90 tons on January 22 and 80 tons on January 23, including lethal weapons and ammunition, were delivered from the United States by Boeing 747-400 cargo planes of the National Air Cargo.

Meanwhile, the US State Department authorized the voluntary departure of its employees and members of their families from the embassy in Kiev.

The State Department also asked U.S. citizens in Ukraine to consider departing the country using commercial or other privately available transportation options. The State Department reissued its Level 4 Travel Warning for Ukraine, saying “Do not travel to Ukraine due to the increased threats of Russian military action and COVID-19.” Previously, the travel warning had also been at Level 4, due to COVID-19.

The British and Australian authorities followed the U.S. example.

However, Josep Borrell claimed that the EU is not planning to follow the United States in withdrawing family members of diplomats from Ukraine amid tensions with Russia.

“We are not going to do the same thing because we don’t know any specific reasons. But Secretary Blinken will inform us,” Borrell told reporters. 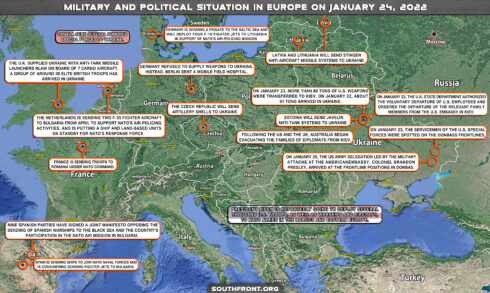 NATO won’t last a day against Russia. Let them bring all the “men” and jets, that’s just more damage Russia can do.

The situation is slowly developing into a European Crusade Against Russia – Part 3. For the history and geography illiterates in Washington, DC, NATO headquarters in Brussels and various European capitols, the first crusade against Russia was in 1812 started by Monsieur L’Empereur Napoleon and his multi-ethnic Grande Armee. It ended badly for the little guy. Part 2 was when Der Fuhrer launched Operation Barbarossa in 1941. In this largest land invasion in history, Nazi Germany would eventually have numerous allies in his war of annihilation. For the ignorant ones, mainly in the English-speaking world, Hitler had numerous allies in his war against the Soviet Union. These included Italy, Finland, Slovakia, Croatia, military units from Spain, Hungary, Romania, Bulgaria and hundreds of thousands of volunteers from the occupied parts of the Soviet Union, France, Netherlands, Belgium, Denmark and Norway in the Waffen-SS and Heer. There were even some Swedes in the Waffen-SS. Again, it ended very badly for the invaders. Today’s path to lunacy will not be any different. (Note; I purposely did not include the Crimean War or the Allied intervention during and after World War I to secure Allied supplies given to Russia and the attempt to subdue the Bolshevik Revolution).

You also forgot the Teutonic knights.

The invasion by the knights of the Teutonic Order in the 13th century was assisted only by several thousand Lithuanians and not on the massive scale of the 1812 and 1941 invasions.

Russia is very much self-sufficient, I wonder how long Europe will stand when supplies run low and citizens become agitated….

It will be so fun to watch here. Fortunately, we have many sheeps for pullovers and bikes to move far. :-D

Silly rabbits, there is no military option against Russia. Unless you let your nukes fly but that would be MAD!

To be honest I doubt nukes will happen in a war. Russia will destroy them in Ukraine, and the Americans will vote to end the war. No doubt USA will try to get revenge, but I doubt nuclear will be an option. What are your thoughts, brother?

When someone say nuclear war ppl always think Mad. There is tactical nuclear munitions (3bv3…), which imo will be used a lot.

If Russia doesn’t create a buffer zone between them and NATO states will be seeing similar scenario as we have seen in Yugoslavia in coming 10-20 years. I am positive that Russia’s “think tank” is fully aware of this one. Creation of this buffer zone can prove costly, but for sure buys more time. In the meantime Pacific will become competition playground. I would actually suggest a different scenario for Russia promoting a different philosophy worldwide … not socialism, but idea that people should buy only what they need and not more than that. This would ruin the Western economices and financial system in a matter of months, depriving them means to fund military/police societies. Fund some kind of “Stop buying” movement. It’s funny, as new dogmatic ideas West has been promoting is ecological radicalism, so in a way doing such a thing (“Stop buying”) would be using their resources to fight them (Brits would be proud with this idea :-))

You think Iran and China will help Russia slow down NATO?

Cheerleading for war is below infantile. But thank goodness Putin is rational. He doesn’t need a war. Let the generals on both sides ratchet up the threat potential. After all we survived 45 years of hair trigger nuclear standoff. The military positioning is essential but it does not preclude a peaceful settlement, it contributes toward that end.

Each war is a matter of at least two parties. If we are talking about the war Russia vs NATO = USA, unfortunately we have only one rational position of the parties involved here, and that is Russia. Unfortunately, the other side is stupid and war is exactly what it wants to provoke. Unfortunately, America does not currently have the president of Mr. Kennedy qualities, who averted the impending nuclear war with the USSR due to the Cuban Missile Crisis. We all know what rewards he then received for his service from the military-industrial complex. No way,this time there will be a war.

Actually all the players are best seen as rational but with different interests. The largest distinction is that the Russian side is monolithic and has a single, coherent, interest. The NATO side is by necessity a conglomeration of different interests. However there is one common and coherent interest all those NATO members share: fear of Russia. They know that the Bear can’t be invited to the common dinner table because he won’t behave. After all he is a bear. The Eastern European members of NATO still have scars on their backs from being clawed by the bear, and the bear’s Cheka. The Western European members do not have that visceral sense of threat. To keep NATO unified, nothing would serve the hegemone’s interest more than an overtly bearish aggressive act by Russia to clarify to all members why there is a NATO.

Putin’s better path forward is through continued economic engagement. Look how well NS 2 serves to fracture NATO cohesion. More such ties with Germany will slowly but surely erode the basis for NATO.

Be patient and manage the peace.

In terms of maintaining a sense of proportion, Hitler had 3-4 million troops involved in Barbarossa. Putin’s 150,000 along the border with Ukraine is not a signal he is going to over run Europe, or even contemplating that. In 2014 he set the table for the present squeeze play: Transnistria, Crimea, Belarus all provide forward operating bases to present Ukraine with an impossible predicament of fighting a four front engagement. Ukraine can’t do it but neither can Russia fully exploit this advantage without huge expense.

Let’s avoid the carrying costs of troops on standby and cut the deal needed to promote further commercial engagement and grow the peace.

I love these threats that go along the lines of ‘If Russia invades Ukraine, it will be very painful and bloody business’. Guys, you’re talking to the people who lost between 9-13 million soldiers in WW2.

Your point? Russian losses to defeat the Nazi invasion do not mean Russians want to lose another generation to war. Quite the contrary. Russians who know the cost of war live peace most dearly. Further, the economic growth that has occurred in Russian the past twenty years provides a none human asset that Russians don’t want to lose either. The cost benefit analysis overwhelmingly favors peace over war. Don’t sacrifice the Russian people on the alter of the victory in the great patriotic war. They don’t have to die like that again.

US, RUSSIA AND UKRAINE: The Good, The Bad and The Ugly

My SWAG is that the “Russian Invasion” scenario has been whomped up by the Biden Regime — with Obama’s venerable advice — for reasons of domestic politics and geopolitical strategy.

Of course Obama famously referred to Russia as a backward, weak, 3rd world country of no significance. He was wrong then and he is wrong now. In fact, Russia may have a viable first strike capability plus a magnificent air defense.

The idea of the US is to create a no-lose scenario involving liberation of the Donbass — which previously fought Kiev to a standstill and bloodied their forces in the first go round.

This scenario involves attempting to retake the Donbass using military force. Rebel fighters would be arrested and tried as terrorists, yada yada. Valuable natural resources would be repatriated to Kiev. The Banderites would be satisfied and Zelenksky could continue to pretend to exercise control over Ukraine.

Should Russia directly intervene and defeat this initiative, it would be a black mark against Putin in international diplomacy and set him up for global disapprobation and sanctions.

If the retaking of the Donbass is successful, then Ukraine would no longer be embroiled in civil war and would be able to join NATO. Towards this end both the UK and the US have been shipping lethal weapons into Ukraine and training their soldiers.

A military buildup on the borders of Ukraine is to be expected as a way for Russia to deter war in the Donbass. And likely, Russia has been covertly arming rebel forces and sending mercenaries to bolster their capabilities.

The attempt by the US to “show the flag” in the Baltic and to fly reconnaisance, etc. should not be taken seriously. US forces would be smoked if they attempted to intervene.

The wild card is recognition by Moscow of the independence of the Donbass territories. This would only happen after a failed military assault by Kiev.

Bottom line: the US is holding a busted flush on this one. But the constant anti-Russia propaganda gives the Biden Regime something to talk about besides COVID, inflation, crime, immigration, and a broken economy — and diverts attention from Biden’s massive cognitive deficits.