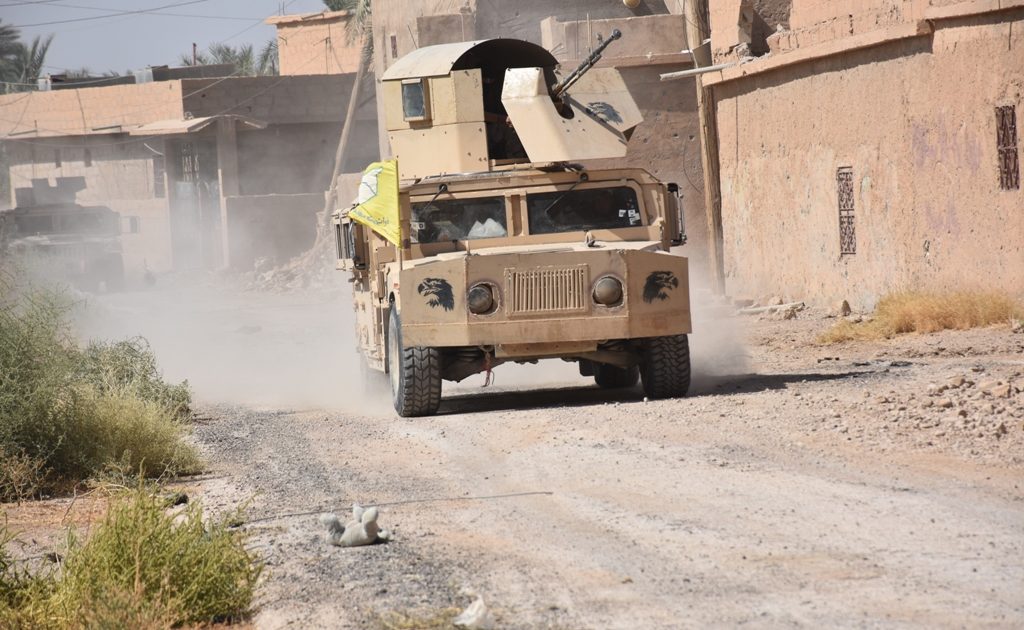 In its official announcement of the ISIS defeat in the Middle Euphrates River Valley, the Syrian Democratic Forces (SDF) called on the Damascus government to recognize its authority over northeastern Syria.

“We call on the central government in Damascus to prefer the process of dialogue and start practical steps to reach a political solution based on the recognition of elected self-administrations in north-east of Syria and acceptance of the specialty of the Syrian Democratic Forces,” the group’s official victory statement reads.

The US-backed group went on to call on Turkey to withdraw its forces from northern Syria and stop mrddling into the country’s internal affairs.

“We also call on Turkey to stop interfering into Syrian internal affairs and to stop constantly threat its security and exit from Syrian territory, especially Afrin, and to adopt dialogue as a way to resolve outstanding problems in the region based on mutual respect and good neighborly relations,” the SDF said.

The SDF is apparently trying to use its recent victory over ISIS as a leverage in the political filed. This attempt will likely fail, as the group is clearly still unwilling to make concessions of any matter.

Syria’s Defense Minister warned the SDF that the Damascus government is willing to recapture northeastern Syria by force if necessary. The minister said that the only other option available for the group’s leadership is to join the reconciliation process.

The US-backed group was also warned by the Prime Minister of the Iraqi Kurdistan Region who said that the SDF should reach a deal with Damascus, involving Moscow as a mediator.

Despite these warning, the SDF appears to be determined to pin all of its hopes on the U.S. military presence in northeastern Syria. The presence that may end or be reduced dramatically at some moment.

Time for Kurds in the SDF to realize who their real friends are as opposed to those who shimmer in the desert heat …… and disappear. NE Syria does not form any part of Kurdish ancient lands apart from a small enclave along the Turkish/Iraqi Border. If SDF wish to retreat behind those lines of ancient Kurdistan, so be it but they won’t be taking any part of ancient Assyria with them, or of today’s Syria.

Kurds have no friends apart from Israel.

Actually, Americunt lardasses have been arming the Kurd turds since the 1960’s. Zionists are always promoting evil, but they gained a presence in Arbil only after the Americunts and NATO destroyed Iraq in 1991. Now Arbil has the largest Zionist presence in any Arab country.

SDF seems to be acting like their Zionist sponsors, full of hubris, arrogant and uncompromising, Syrian armed forces and Turkey should teach them a lesson they will remember for a while and crawl back to the areas they initially inhabited. SDF is not a potent military force, Syrian armed forces should squash them like mosquitoes, if US want to provide air cover to their proxies, the S300 are ready to go.

The SDF is a collection of CIA and Mossad recruited pimps and getting too big for its boots, thanks to Putin permanently stuck up Erdogan’s and Nutter Yahoo’s arse. These worthless SDF pimps have even adopted yellow Hezbollah colors. It is time these bastards are whacked or Syria will be partitioned forever and Zionist plan has evolved on the Golan. If a territory is not defended immediately it is normally annexed by the occupiers permanently. Hafez al Assad played into Americunt and Zionist hands when he allowed the UN force on the Occupied Golan and accept defacto Zionist annexation in 1974 armistice. Syria should have fought a asymmetrical war of liberation instantly and is now paying the price.

send them back to the border as tenants – that’s what they are and that’s where they should be-treasonous bastards, in bed with the squatters and the criminally insane and corrupt cabal in washington dc.

The PKK or as some know them by their new cover name (SYRIAN DEMOCRATIC FORCES) are a greater long term threat to Damascus then ISIS ever was. The PKK are expansionist. They only want the Eastern half of Syria today to build up a larger force led by Israelis. If they get away with stealing the Eastern half of Syria today you can bet that the PKK as the Zionist they are will one day by shelling Damascus and enclosing on Damascus from the East while Israel pushes on Damascus from the west. That is the master Zionist plan. All PKK are terrorist. No matter what new social engineering cover name they go by.

The last resort court in Belgium [I forgot the name] declared PKK ‘not terrorist’. What I see instead is the expert brainwashing of the Kurds by the US. It truly is an evil scheme. When you see so much of the US population brainwashed by fake news and TV it is not too surprising that they succeeded in brainwashing the Kurds. They are “righteous fighters” as someone said. It is a shame. It can only end badly.

The Armenian genocide – that happened about 100 years ago. You are holding that against them now? Is there any group of people that has not done violent deeds in the past?

So, we are gonna expect a dual (separate) offensive by syrian and turkish forces against those traitors

President Assad should unleash the Sultan on these gypsies.

You not thinking straight, as turks are no friends to the syrians, so what you suggest is make a gift to the turks more parts of syria, instead of kicking them out. You confuse the double games the russians play with the turks with what syrians want.

Of course the turks are not on the same side as the Arab nationalists and Syria, but we both agree on one thing : kurdistan is just a meme. Erdogan would rather have an Arab nationalist leader like President Assad than having a (((kurdish))) state south of Turkey that will be used to attack them.

agree that erdogan dont want a kurdish state, but we disagree on all else you concluding and I am tired to explain to people who use selective memory for the turks and what their role in all this mess was is and will be also in the future, just because the russians kissed their ass and sucking them up. Stop using selective memory.

This isn’t going to stop until the Kurd Pestilence is “history.”

The SDF meme army can go to the Israeli regime or get lost to burgerland. They either accept President Assad and beg for forgiveness for backstabbing their country and abandoning the SAA or he will fight them just like he fought other terrorists. Syria will remain an Arab country and Arabic will remain the only official language, every inch will be liberated from kurdish scum.

Another lame attempt at partition.

Eliminating SDF is the only best option

Since I have been following the Kurds closely for almost 4 months now this is what I see: They did have some kind of revolution in the Rojava district which they proudly call “Our Democratic Experiment”. It is a radical grassroots democracy. It is very ideal and has support in Europe and all over the world. The US knows exactly how to use that to manipulate them and get up their hopes. They have been petted on the head and praised and they feel very righteous and think the whole world is obliged to support them. When Trump declared withdrawal of US forces from Syria some of them recognized the intentions of the US as “wholly dishonorable” and they thought of reconciliation with Assad, especially when Turkey started to occupy the boundary with more terrorists. Then they had many meetings to hash it out. The aim was to unite all Kurds to decide what is best for the Kurds. Im my opinion that is when they made their fatal mistake. Had their focus been ‘what is best for the country’ they would have made better decisions. After that their comments on Assad got more and more hostile and they seem to be completely bamboozled by the US in spite of the fact that neither the US or the rest of the world helps then in any way to deal with the huge numbers of terrorists they defeated and hold imprisoned, their families too. What a mess!

The “SDF” and “ISIS” are geopolitically the same thing: US/Zionist proxy armies. The Syrian people will never tolerate “SDF” occupation of Arab lands in northern Syria. Turkey will not tolerate this situation for long either. Washington will end up getting booted out of northern Syria just like it was kicked out of south Vietnam.

time to mop up the rest of this smug bunch of twits.

One USA proxy army, have “defeated” another USA proxy army, with a help of regular USA army, in Syria, on stolen land.. and now call for recognition.. That arrogance of the US is so big, that they will choke on it..

Putin is pulling Syrian’s leg in Idlib and in the NW Syrian.