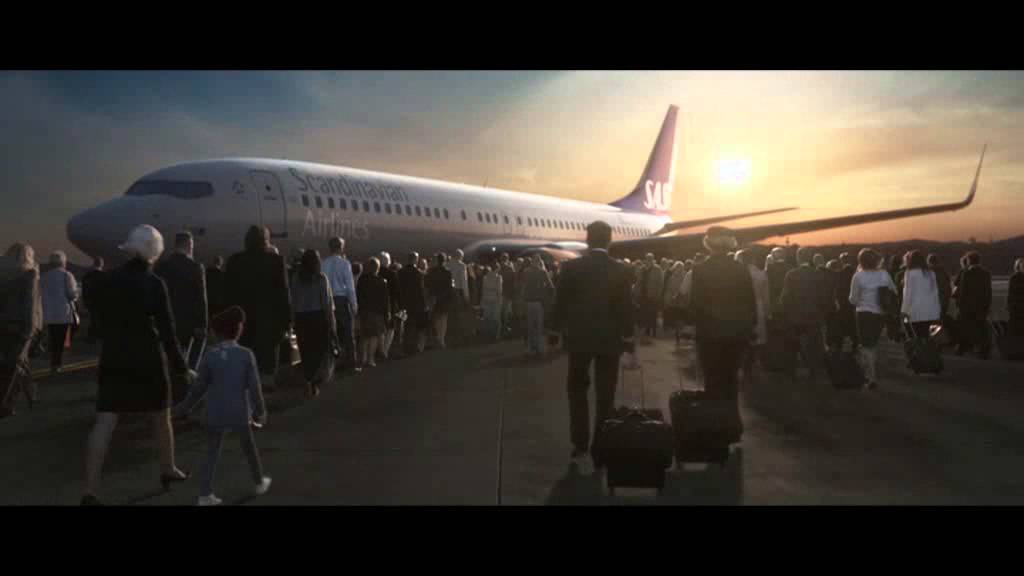 The leading airline in Scandinavia – Scandinavian Airlines (SAS), had to take down its video commercial, after it declared that “all” Scandinavian culture was borrowed and it even featured a black man who said he was no better than his “Viking ancestors.”

The ad begins by proclaiming that “nothing is truly Scandinavian” showing that things people from Denmark, Sweden and Norway take pride in, were “copied.”

These include: wind power plants, popularity of bicycles, parental care rights and democracy.

The ad then lists many of the things that Scandinavia is known for, pointing out how it’s actually from somewhere else:

“We are no better than our viking ancestors. We take everything we like on our trips abroad, adjust it a little bit, and et viola. It’s a unique Scandinavian thing. Going out into the world inspires us to think big, even though we’re quite small.

In a way, Scandinavia was brought here, piece by piece, by everyday people who found the best of our home away from home. We can’t wait to see what wonderful things you’ll bring home next.”

The idea is somewhat obvious: nothing originated there, but all of these good things were a result of travelers who went between countries to bring happiness and progress to others.

The punchline “We are no better than our Viking ancestors” is said by a black man.

The advert wasn’t positively accepted, and rather became infamous quite quickly. People generally took to social media and began ranting because of the content.

The original video was taken down from SAS’ YouTube channel, after it received approximately 300 likes and 13,000 dislikes as can be seen above.

Here’s how SAS describes the message behind the ad:

“SAS is a Scandinavian airline that flies travelers to, from and within Scandinavia. We stand behind the message in the movie that is about travel enriching us.

When we travel, we both influence and are influenced by others. The experiences we bring from our travels affect us as individuals but also our communities.

We at SAS are proud of our Scandinavian origins and the values ​​that characterize our open, equal and democratic societies.”

One thing that surely is “imported”, and not only in Scandinavia, but the EU, in general, are extremists, who in one of the best-case scenarios spread hate speech and calls for ethnic cleansing, and in the worst orchestrate or carry out terrorist attacks.

The head of the Swedish Migration Agency, Mikael Ribbenvik warned that Sweden was too welcoming to suspected terrorists and war criminals, providing them with asylum, passports and job permits and being unable to deport them following that.

Ribbenvik believes the current rules are “unreasonable” and result in Sweden being perceived as “a safe haven for war criminals and potential terrorists”, he wrote in the newspaper Dagens Nyheter.

A record 122 people deemed a security risk were issued temporary residency permits in Sweden in 2019, the official said.

Another example is of the recently deceased “Chechen Blogger” Imran Aliev, who was killed in his hotel room in Lille, France. He was given asylum in Belgium, from where he continued to spread his “democratic” calls for killing of different ethnicities in Chechnya and Dagestan.

Examples such as these, and carried out by those were suspected of terrorism, or even had proven ties to terrorism are numerous, and the EU lacks any agenda to tackle this issue.

It simply allows them in, provides them with social and other benefits, and hopes that the wolf has changed his coat and his nature. Clearly that isn’t the case, judging by the examples.

Yeah, the truth is, whom invented the wheel, eh…. and so on, this is just ignorants ranting, and the argument have to come from an fake leftis, whom belives everything they read in the western PC-infested MSM witch above all incl shitholes like BBC whom produces so much bullshit in every way possible that I can imagine, history, ancient history to the present lies about Syria, and then we have the Sweds, witch are in an league of their own, like Norway, witch is so far out that even the usually braindead sheep f…. “vikings” are been jerked awaken to whats going on.

This kind of attacks on the north and white prople have been the hal mark of the Khazars/Jews, and even when I could charf up a lot, witch I dont bother, I will just give you some clues. If you go to Kola-peninsula in North western Russia, you will find 5000-7000 years olf rock carwings, depickting ships with sail, etc, and where I lived we have 2500-3000 year old stone labyrints witch are spread all over europa, incl the north. 7000 year old boats, 8000 year old fishnets, etc, to pre-stoneage vilages in Finnland and Russia in Kola/Finmark is ruins that are 10 000 years old and nobody was suposed to be there, we where claimed to live in caves, right BBC.

The even more staggering writing systems witch the Norwegians claim their “norse” is old, while the Finnish Runes are much older, much older, and the lies, fakeing of european history is never ending, and in that sense, Russia is not even mentioned, and our language Finno-Urgic is been debunked thruout, and that when they claim Finns are from Ural, that isnt so far of, because, and I know Russians knows this to, Finnish tribes roamed from the Atlantics to Ural, and from Ural to the American mainland, the Tartarians ruled, and that before The Duchery of Moscowy was begun, and that was due to the Central europeans, aka the Tzars, that is mainly coming from “Germany” and Russian history was faked thruout in the begining of the 1800s to the Bolshewiks, witch wiped Tartaria out of existence, even when the profs are stil around, it was after the “Pugarev rebelion”, the last bits fell and we got whats to day Russia. https://www.youtube.com/watch?v=XrKhLG-KU7w

Ancient map, Carlemangne 814 Europa, do notise the various kingdoms, etc, and to the so called Norse, eh… the name, NorGe, is because of the youngest son of the Finnish king, Norri, aka the Norsmen, etc, and then we have the Khazars, and dont forget this Norwegian language is just some centurys old, while Finnish is one of the oldest in the world, stil in use, the scums dont like to debate that. http://www.emersonkent.com/map_archive/europe_charlemagne_814.htm

Whom invented what, bank notes, meatballs, uh…. etc, is irrelevant, and I really dont care about that since most of it goes back to time immemorial, but why is our history lied so much about, that is another question, this rants made by SAS tells me more about them than what this idiotic comerisal do, god how stupid is it possibly to be. But since this is becoming long, I cutt it off with this one, about the Veneti, another Finnio-“urgic” language. http://www.paabo.ca/uirala/veneti/veneti.html

The thing is, since I just gave you a little bitt, is, that the west is lying about everything, and I mean everything, incl history and ancient history even more. To the Hungarians, since they claim they are realated to the Finns, you never came from somewhere, you and I have always been here, its the so called Indo-europeans witch means Turko-Mongols that came, and among them the Khazars, but the time lines are plain bullshit, and its much newer than they want to admitt. And so on. And as said I cutt this short, and will maybe some other time deal with more, but never forget this, instead of focusing on African Blacks history, they try to steal and fake our history, like the Sweds whom claims vikings where black Africans, this is an downright insult to both races, and Africans have never been a part of the Mediterain sea, sea faring, yes, but not European, when the Archeologists even in present ISISrael have found white ass europeans witch where dated 6000 years back. I have nothing against Africans, but the history they teach us all, is just bollocks, period.

Everyone should study that video. It is the most egregious globalist BS propaganda out there, the aim of which is to destroy the base of every culture! And make you an uprooted slave who is constantly confused. The team who came up with that video should be… well, you know what I mean! ;)

White people are under vicious attack all over the world and most don’t seem to notice or care. What comes around goes around, 500 years of European aggression has culminated in what we see now.

Globalist anti-nation state, anti-independent cultural identity, propaganda. In the elite globalist fantasy narrative, the future consists of a mass of internationalist working-chumps as homogeneous, interchangeable and controllable. It’s a 21st century paradigm shift of the older communist fantasy, since that 20th century paradigm failed to produce the desired international social and demographic control as envisioned, now its just stripped of the marketing pretensions of vast benefits for the working-chumps.