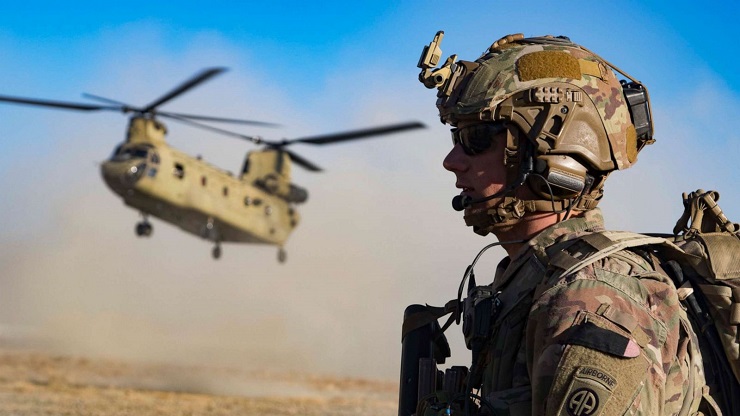 General Scott Miller, US and allied forces commander in Afghanistan, announced on April 25 the beginning of foreign troops withdrawal that should be completed by September 11, according to President Biden’s decision. Is the US ending the war waged for almost twenty years? In order to understand this communication, it is first of all necessary to consider the results of the war.

The toll in human lives is largely unquantifiable: the “direct deaths” among the US military would amount to about 2,500, and the seriously injured soldiers are over 20,000. The contractors (US mercenaries) killed would be about 4,000, plus an unknown number of wounded men. Losses among the Afghan military would amount to around 60,000. Civilian deaths are in fact incalculable: according to the United Nations, they would have been around 100,000 in just ten years. It is impossible to determine the “indirect deaths” from poverty and disease, caused by the social and economic consequences of the war.

The economic balance is relatively quantifiable. For the war – the New York Times documented on the basis of data compiled by Brown University – the US  spent over 2,000 billion dollars, plus over 500 billion for medical assistance to veterans. The war operations cost $ 1,500 billion, but the exact amount remains “opaque“. Training and arming the Afghan government forces (over 300,000 men) cost 87 billion. 54 billion dollars were spent on “economic aid and reconstruction”, largely wasted because of corruption and inefficiency, to “build hospitals that never treated patients and schools that did not educate any student, and sometimes they didn’t even exist”. 10 billion dollars have been spent on drug fight with the following result: the opium cultivated acreage has quadrupled, so much so that it has become the main economic activity in Afghanistan, and today supplies 80% of opium illegally produced in the world.

The political-military balance of the war, that shed rivers of blood and burned enormous resources, is catastrophic for the United States, except for the military-industrial complex which made enormous profits with it. “The Taliban, who have grown stronger, control or contend much of the country,” wrote the New York Times. At this point, Secretary of State Blinken and others propose that the United States officially recognize and finance the Taliban, since thus “they might govern less harshly than feared after taking partial or full power — in order to win recognition and financial support from world powers”.

At the same time, the New York Times reported, “the Pentagon, American spy agencies and Western allies are refining plans to deploy a less visible but still potent force in the region, including drones, long-range bombers, and spy networks.” According to Biden’s order the US is withdrawing its 2,500 soldiers, the New York Times reported,  “but the Pentagon actually has about 1,000 more troops on the ground there than it has publicly acknowledged, belonging to special forces under both Pentagon and  CIA ”, in addition to over 16,000 US contractors that could be used to train Afghan government forces.

The official purpose of the new strategic plan is “to prevent Afghanistan from re-emerging as a terrorist base to threaten the United States”. The real purpose remains the same as twenty years ago: to have a strong military presence in this area at the crossroads among the Middle East, Central, Southern and Eastern Asia. It is an area of primary strategic importance especially towards Russia and China.

This article was originally published in Italian on Il Manifesto.
Manlio Dinucci is a Research Associate of the Centre for Research on Globalization.

The reason for the warcrime in Afghanistan by the Jews’ US and European tyrannies, and the many other of their warcrimes is simple:

Protocols 2:1 “It is indispensable for our purpose that wars, so far as possible, should not result in territorial gains: war will thus be brought on to the economic ground, where the nations will not fail to perceive in the assistance we give the strength of our predominance, and this state of things will put both sides at the mercy of our international agentur; which possesses millions of eyes ever on the watch and unhampered by any limitations whatsoever. Our international rights will then wipe out national rights, in the proper sense of right, and will rule the nations precisely as the civil law of States rules the relations of their subjects among themselves.”

Forever warcrimes for plundering us of our wealth and stealing more or our Liberty, not victory over any so-called enemy.

The additional reason for the warcrime in Afghanistan was the poppies, heroin. Keep we people of the West stupefied on drugs while using the proceeds to fund war, chaos, and destruction around the world.

That is: The warcrime in Afghanistan was really a war against us as much as against Afghanistan. Same as the warcrimes in Iraq, Southeast Asia, etc.

sorry anything that uses the NYT as a source is just an arm of the NYT and therefore useless.

anyone who thinks that 16k contractors are going to have any freedom of action has got his head up his posterior. RU and CN are probably already there talking to the Taliban.

We only did it for the American people and for freedom

and for the afghanistan democracy and well being of the afghan people. promise.

Most Russian’s crap on their living room floor.

“amerikan parents teach they children to have bad manners: they consider this to be rebelliousness”. Geoffrey Gorer obviously u have never lived in a civilized nation “the people of north amerika accept a level of ugliness in their daily lives nearly without precedent in the history of western civilization”. Yuri Bezmenov obviously u r the typical childish self uglified amurikant

it seems to be the time to stack up on smack or heroin since the Talibans won’t continue the poppy-business and since the supply of opium from Afghanistan is an incredible 80 pct of world production a shortage of heroin/smack/horse etc can be expected- a lot of cold turkey in the world the next couple of years.

It will be interesting to see how the US veterans react to Blinken’s argument of funding the same Taliban that they lost friends and limbs over so that the Taliban will act ‘more nice’.

US occupation of Afghanistan was intended to be a staging base for future operations against the last country on the list of PNAC/Neo-Con identified targets, outlined in early 2000’s, under then Secretary of State Rumsfeld – Iran. US General Wesley Clark spilled the beans on the whole Neo-Con post-911 project, and its targets, to invade and/or impose regime change on seven countries in five years – Iraq/Syria/Lebanon/Somalia/Sudan and Iran. Only Afghanistan quickly turned into a quagmire – not a secure forward base for future US operations against Iran. This is sort of thing that happens when put fantasies before realities – and Neo-Cons are complete, albeit dangerous, fantasists, dreaming of recreating the world in their own image.

another lost war by the cowardly murikans…even amerikan historians concede that Russia had entirely defeated muhjadin in Afghanistan prior to Gorbachev’s decision to withdraw all troops amerikans unable to feel, need Afghan heroin to destabilize other nations—today 18,000 US private mercenaries will not be withdrawn—US fake news will always omit the truth the Disney characters that populate USA (baudrilliard) living in hyperreality believe anything the CIA requires “amerika requires a stupefied population”. Christopher Lasch