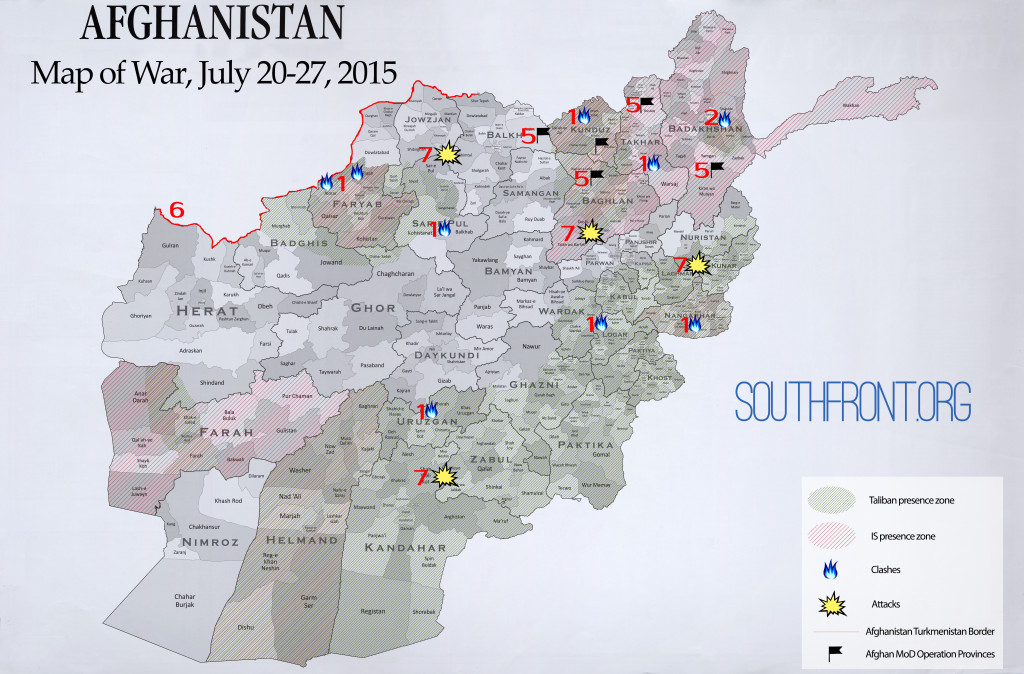 The “Maps of the War” series is released  due to your support. Help produce interesting content and join our struggle by donating via PayPal: southfront@list.ru or via: http://southfront.org/donate/

The Kabul government is preparing for a big advance in northern Afghanistan. National Security Forces have been involved in intense clashes with the Taliban in 7 provinces. At the moment security forces have gained round only in Faryab province. The Taliban has now started a new offensive in the Badakhshan province by taking control of the “Kala” military base, seizing several checkpoints and capturing 100 pro-government fighters. Islamic State has also participated in clashes at the Afghanistan-Turkmenistan border.

Despite Afghan government’s official reports that clashes are underway in 7 provinces, there are much more zones of military activity in the country. The Taliban has partly taken control of other Afghan provinces too. Attacks on military servicemen and policemen constantly come around the south, east and central regions. 4100 Afghan National Security Forces servicemen were killed and 7800 wounded since the start of 2015. Kabul’s big advance in the north is a reaction to numerous requests of local authorities and an overdue attempt to get the situation under the control. However, the events in the Badakhshan province on July 24-25 indicate that government forces have most likely been losing the will to fight against the Taliban.

Islamic State militants have increased activity at the Afghanistan-Turkmenistan border. From 12 to 70 Turkmenistan bodyguards have been already killed since early July. The terrorists aim to capture gas fields of Turkmenistan. There are two opportunities for IS there:

The increase in IS activity is synchronized with signing of The Iran Nuclear Deal and is clearly pushing the USA’s interests: to prevent the supply of Turkmen gas to China (through TAPI or Uzbekistan) and redirect the flows to the Europe. Iran will replace Russia in energy supplies, enforcing the USA for further anti-Russian actions in the central Europe.