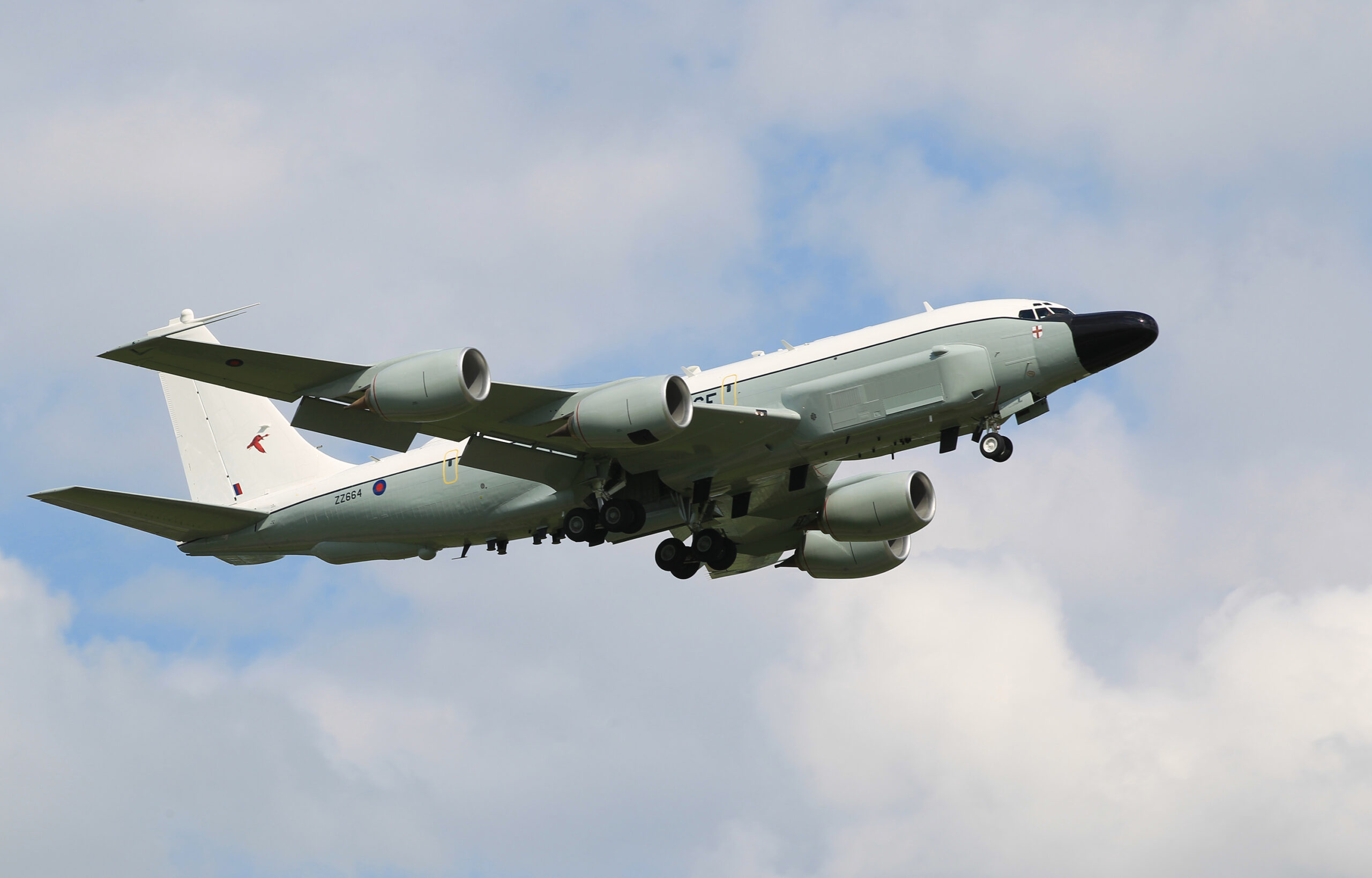 On November 12, an advanced RC-135W Rivet Joint reconnaissance aircraft of the Royal Air Force (RAF) was spotted by aviation observers while conducting an unusual mission over the Eastern Mediterranean.

The large reconnaissance aircraft flew off the coast of Syria and Lebanon for more than five hours, before departing to its home base. The aircraft was most likely spying on Russia’s main bases on the Syrian coast, Hmeimim Air Base and Tartus Naval Base, and possibly on positions of Hezbollah in Lebanon.

Returned after 5 hours of eavesdropping and gathering information about air defenses. pic.twitter.com/aEJ9PI5OZ3

The RC-135W was originally developed for the US Air Force by a number of companies, including General Dynamics, Lockheed, LTV, E-Systems and L3 Technologies. The aircraft is equipped to detect, identify and geolocat signals throughout the electromagnetic spectrum.

The United Kingdom bought three old KC-135R aircraft in 2010, then upgraded them to the RC-135W Rivet Joint standard under the “Airseeker project”. The acquisition of the three advanced aircraft was budgeted at £634 million, with entry into service in October of 2014.

The aircraft formed No. 41 Squadron of the RAF. They are currently based at Royal Air Force Waddington station in England.

RAF spy aircraft have been very busy recently. Just a day earlier, the Ministry of Defense of Russia said that it had scrambled a Su-30 fighter jet to intercept a British RC-135W aircraft that attempted to approach Crimea.

Ah. So turkey has always been getting support. 😂 This may be how they find targets faster two years ago. So SDF really are evil traitors even against Kurds, and Israel will always be ready for a backstab. Hezbollah seems tied up in Lebanon. Iran talks will fail and will be set up for that Nuclear strike. Frontline is not always the battlefield but battles can be engaged quickly or disengaged.

No nuke on Iran, if Iran gets attacked by a nuclear weapons, every last Shia in the Middle East will fight to the death against Israel and its allies. If Iran goes down, the Shias will be killed because everyone gang up on them.

It seems to all be a bunch of squabbling amongst smaller players, meanwhile the Globalists are playing an overall long-term game of chess against Russia hoping to eventually bring it to it’s knees.

Russia should respond in kind by flying one of their spy planes close the U.K. Watch the U.K. lose their minds if they do.

Lol NATO pieces of shit have such a hard time trying to “debunk” Russian air defenses that they have to continually fly radar recon missions against them. Goes to show how much they fear the S-400 battery. Russia should fly their Tu-214 spy planes next to US/Nato bases in the Mediterranean, Persian Gulf. Return the favor and watch how western media seethes.

No peaceful intentions here. The RC-135W is made with massive receivers specifically designed to 1) locate exact coordinates of radar emitters 2) analyze the different frequencies and bandwidths which air defense radars operate in order to develop electronic warfare 3) Eavesdrop on high frequency communications 4) Possibly even control drones at long ranges via UHF datalink.

This has been going on far too long, hit it with a heat seeking air-air missile or shred it with 30mm cannon to avoid giving away radar emission data. Or at least scare them good with close fly bys. Americunt pilots shit themselves when that happens and cry “muh unprofessionalism!”

Americunts and British fear the S-400 battery so much they send their most expensive recon planes (200+ million) on an almost daily basis recon missions to collect data on their radar emissions. Over 100 fly bys later and they still cannot figure it out lol.

Off coast 30-60 miles is international waters. But a spy plane in a war torn region is an act of aggression especially when a nuclear power has a base there.

Those of us who know the history of WW2 knows that prior to the German invasion of Russia in 1941 there was a heavy increase of recon flights by the Germans which the Russians ignored and ignoring it ended up costing the Russians 28 million people and an area of Russia the size of the eastern USA to the Mississippi utterly destroyed. I don’t think they intend to make the same mistake twice.

I doubt think the Russians will do anything rash right now because it would take the USA months to get the heavy armoured divisions nesessary to fight Russia into Europe however the USA / GB are playing a stupid game with these coordinated bluffs.

NATO aircraft need places to land and ports to dock their ships … the Russians have tons of road mobile and air launched missiles that can hit every port and airfield in Europe with conventional and / or nuclear weapons in 15 minutes flying time.