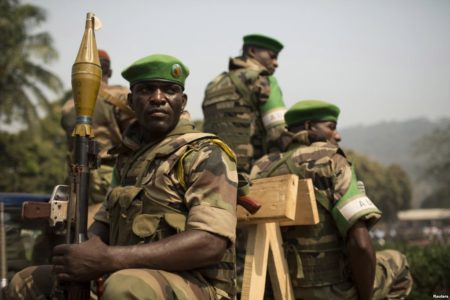 Bodies of three Russian citizens – Orhan Dzemal, Kiril Radchenko and Aleksandr Rastorguev – were killedfound on a road 23 km from the town of Sibut in the Central African Republic (CAR) on July 31.

CAR sources say that they were killed by unidentified armed men. According to reports, at least two of the killed persons had press cards. No further details of the incident have been revealed.

The Russian media and public figures say that Dzemal, Radchenko and Rastorguev arrived in the CAR to make a documentary on the so-called Vagner Private Military Company (Vagner PMC). According to some sources, their main goal was to collect compromising information about the Vagner PMC.

It is important to draw attention to the background of Rastorguev and Dzemal.

According to data from sources aware of the situation, Rastorguev, Dzemal and Radchenko arrived in the CAR posing as Russian journalists. However, their arrival was not linked to any kind of cooperation with Russian media.

In fact, they were collecting info about activity of Russian and Russia-linked private military contractors in the country. Their real employer was the Investigations Control Center, a body linked to the exiled Russian tycoon Mikhail Khodorkovsky, who is now resident in Switzerland.

Local sources say that during their work in the CAR Rastorguev, Dzemal and Radchenko was in contact with opposition groups with a strong influence of radical Islamists.

Since 2017, when the CAR and Russia signed an agreement on a cooperation in the security sphere, Moscow has been actively expanding its influence in the country.

The UN Security Council then approved the reached agreement, which includes the delivery of pistols, assault rifles and rocket-launchers as well as the training of 1,300 CAR troops. In March, five Russian military servicemen, 170 civilian instructors were officially deployed in the CAR. According to the Russian Foreign Ministry, the aforementioned supplies were provided on a no-cost basis.

On the same time, an unknown number of Russian and Russian-linked PMCs also operate in the country. According to some sources, these PMCs are involved in coordinating and providing security to CAR President Faustin-Archange Touadéra.

Moscow’s goal in the region is to defend and promote the interests of Russian companies and the Russian state. According to reports, Russian PMCs are already involved in guarding of diamond mines in some regions.

In turn, the CAR government is working to diversify its foreign and economic policy in order to improve the social and economic situation in the country. In fact, the CAR government is seeking to soften a neo-colonial pressure from the West, first of all France [The CAR is a former French colony]. European transnational corporations and thus governments are concerned over this situation.

In June, French Foreign Minister Jean-Yves Le Drian visited Chad and Kongo where he discussed the situation in the CAR with local leaders. According to local sources, France is actively working with Séléka, an alliance of various rebel and terrorist factions aiming to overthrow the CAR government. It will contribute to interests of Paris if the CAR President is changed or the “too independent” CAR government is overthrow.

Most likely, the activity of the group of Russian “journalists” was designed to discredit somehow the Russian presence in the CAR thus easing attempts of France and its allies to gain back their positions in the country.

It is still unclear who was responsible for the death of members of this group.

“Their real employer was the Investigations Control Center, a body linked to the exiled Russian tycoon Mikhail Khodorkovsky, who is now resident in Switzerland.” ———————- Oh my … how long is it going to take the “Our Values” MSM to sit up and take notice – Putin personally snuck over to the CAR during teatime and offed these guys hisself?

If he wanted to I do not doubt he could!?

If this is true, thanks for due info. The only darkness then is why the h… would these 3 expose themselves so much in a so dangerous country without heavy protection?

Found the answer myself. They were under the “protection” of Radio Free Europe, Radio Liberty and Mikhail Khodorkovsky. What could possibly go wrong with so heavy friends?

Good Riddance to the dogs. Probably Crimean Tartars /Ukrainians. It must be sending the ISIS-enablers into paroxysms of rage that CAR have the Russians to protect them from their depredations.

Why would Mikhail K off them? They were working for him. I can’t imagine the Russians doing it but with a PMC and CAR zealots who knows?

The Russians acts more pragmatic today. In the old KGB days nobody dared to be so careless as these 3 guys.

“Local sources say that during their work in the CAR Rastorguev, Dzemal and Radchenko was in contact with opposition groups with a strong influence of radical Islamists.” Orhan is a son of Geidar Jemal, whom a Vesti.fm host aptly described as a wahhabi-trotskyist. So the group relied on what influence Orhan inherited from his father.

Note the shady Zionist Oligarch enabled by the West pulling the strings. Gee ,those western free market ziocons really did a number on Russia under that drunkard Yeltsin! Seeded the place with Zios who raped and pillaged everything. Funny ,how most found succour in the West once Putin came to power. If you ask me ,he should gave shot as many as he could catch rather than allowing them to leave for Europe!

If no Vagner PMC who else killed them.

Another “Putin did it”? We have to ask ourselves ‘cui bono’? And why three ‘Ukrainian’ idiots wanted to go into the wilds of the Sahara where even good guys get dead. Trust the Oligarch Khodorkovskiy will be bringing their carcasses home?

AM Hants
Reply to  Mikronos

Were the Khodorkovski media the first to report it. When I read that, shortly after it happened, I assumed they were on his payroll.

it is good, that they are dead. they have had a lot of opportunities to collect dirt on jews, zionists, oligarchs in US UK and Russia. they took money from oligarchs in stead. Swines.

I sort of agree with you but again I realize it is really sad that they lost their lives that way!

Another line in the story says…

“..Local sources say that during their work in the CAR Rastorguev, Dzemal and Radchenko was in contact with opposition groups with a strong influence of radical Islamists..”

That tells us they were also probably working with Western-sponsored jihadist terrorists as well!

3 bastards on the payroll of Soros.