About half million of civilians have returned to the government-controlled part of the province of Deir Ezzor, which was liberated from ISIS last year, the Syrian state media says.

According to reprots, 489,531 citizens have returned to their homes in the province since the beginning of 2018, putting the total number of the residents at up to 1,037,037 inhabitants.

The Syrian government have been actively working to restore activities of police, civil affairs, banks, post offices, fire brigades and municipal councils across the entire western bank of the Euphrates. Meanwhile, the work is also ongoing to remove the debris, open the streets and repair infrastructure, including water and electricity. Fantastic! One day every Syrian will return!

Not a similar sound heard in Raqqa.

You beat me to it. It is supposed to be shocking there + getting worse daily, due to ill health + of course the bodies rotting everywhere.

The difference is remarkable.

The more Syria rebuilds, the more the zionist agenda falls apart.Bravo and GOD speed to the Syrian people.

What a logic unlogistic remark.

Which part of the Syrian people.

It appears Chinese construction vehicles are in use.

It is appropriate. Western equipment is used by Israel to destroy Palestine infrastructure.

Another of those hwest me here and there. They – as anybody else – take the best to the price.

You not even understand how our world is. We choose in the world market.

And You do forget the bad reasons for destroying Palestine infrastructure. Both of You are as dirty in that as it can be.

When we by mainly by UN send in help all which can is made into weapons and tunnels. You might think its for good reasons, but the result is the same. You are hit back Yourself. The militantPalestines take it and You even there hardly has any leadership for worthless negosiations.

I feel nothing. You not even blame Yourself. And the worst for an outsider: The Israeliens behave more and more like arabs.

None of You want or wish for peace. The last chance was when Arafat died many years ago.

I dont care who made the tractors in Israel. Its what they do. Same woth guns and You.

I guess you don’t have the concept of sarcasm in whatever country you are from.

Nothing? It says that the Chinese have construction contracts in rebuilding Syria. However, their military doesn’t appear interested in getting involved.

Anybody can order a chinese bulsozer by internet. Buying a Toyota telling You are supported by Japan. You have internet and by that support CIA by USA.

Pictures like that says nothing apart from there is a lot of cleaning and nice some do it.

And who do you think the Syrian Government got their *Line of Credit* from to purchase those Chinese goods from a Chinese construction company?

Peace and the benefits of peace return to the land. 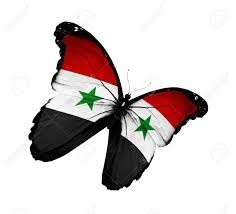 That Sir, is a wonderful image.

President Trump won the election on his promise to overthrow financial capitalism and restore productive capitalism. From this standpoint, he considers that war damages owed to Syria should not be paid by the United States, but by transnational corporations. Is this revolution in international relations desirable or even possible?

Henry Kravis at the Davos Forum. Close to John McCain, the founder of KKR is a member of the Council for Foreign Relations and the Bilderberg Group (of which his wife is an administrator). He employs General David Petraeus (ex-director of the CIA) with whom he organised the transfer of funds and weapons to Daesh. A long-term friend of Emmanuel Macron, he secretly financed his electoral campaign.

114 member states of the « Friends of Syria » financed its destruction by the jihadists. But after they had failed, none of them want to pay anything for its reconstruction. However, they had no problem supporting the states who offer refuge to the Syrian refugees – given that, obviously, this was not a humanitarian gesture, but a means of draining off Syria’s human resources.

Above all, they all hope to further enrich themselves by masking their crime and by obtaining reconstruction contracts.

On 7 and 8 August, meeting in Beirut, the United Nations Economic and Social Commission for Western Asia (ESCWA), estimated the minimal cost of reconstruction at 388 billion dollars. It should deliver a detailed report on the subject in September. Already, aware that what that country experienced had very little to do with a « civil war », but rather with a foreign aggression, it has announced the title of this report – Syria, 7 years at war. Meaning Syria, 7 years at war and not 7 years of war [1].

By comparison, Lebanon, whose population is three times smaller, was only able to obtain 11 billion dollars of international aid during the CEDRE conference last April.

The United States, which had been planning the war against Syria since 2004, does not want to part with a penny. According to the Trump administration, this war was created by the Bush Jr. administration and led by the Obama administration. However, these two administrations were not serving the interests of the US people, but those of a transnational financial class. Not only did they destroy Syria, but also the US economy. Thus it is not for Washington to pay, but these people and the transnational corporations directly implicated in the war.

The engagement of these corporations in the implementation of Admiral Arthur Cebrowski’s plan to destroy the states and societies of the Greater Middle East can probably be explained by their certainty that they would thus gain access to the region’s natural resources, under the protection of the Western armies.

Making the multinationals pay does not exclude obtaining damages from certain states like Saudi Arabia, Kuwait, Qatar or Turkey, which financed, or certain of whose citizens publicly financed the jihadists.

If the Syrian Arab Republic can gather the proof of their role during the war, it will be legally entitled to demand seizure before the tribunals of the country accommodating their headquarters. In the light of President Trump’s arguments, it should be possible for them to count on the support of the new US administration.

It is therefore possible, even without managing to make the states pay, to collect the 388 billion dollars mentioned by the ESCWA.

Àt the end of all wars which called for the payment of damages, national companies were seized. The novelty this time will be drawing the conclusions of economic globalisation and seizing the transnationals.

Even if we don’t know what is productive capitalism.

It is true capitalism (which includes a part for socialism). as opposed to globalisation I think – I hope.

No, globalisation it’s today’s name of capitalism, but the rat is being hunted with two cats, one black and another white. This is what I can say from my grandious bastion (I loved Franckly remarks). Ps, are you yet in the shower?

Cheers, I cannot keep up.

Perhaps, I don’t know, the word as a lot of meanings, https://pt.bab.la/dicionario/ingles-portugues/dodgy

However, I still cannot comprehend why you would ask me ” are you yet in the shower?”. …….. hint “sexual gay predator”.

PS learn how to up or down tick a comment please.

A durable business is a business that appreciates that all the links in the business chain need to make a fair profit. If the chain is broken for any reason the general prosperity declines.

I like more a saying of a british newspaper of the 19th century, give a capitalist a 100% profit and he will kill his mother, about chains.

Some of them, not all of them.
Its mainly the ones with big hook noses that are the problem Jorge :)

What is Meyssan smoking?

I see some new chineae heavy equipment, burn any CAT you find lol

Interesting, in the 19th century The States tried to eat the Canada. Goog Hokey!

Nice to see that normal life is coming back to Syria.

And in Europe their native citizenry, those with any common sense left, are wishing that all the Syrians would go back?

jorge
Reply to  Hide Behind

There’s a nice plateau in Sweida to you, to hide, and to put the question, to not be or to not be.

Hard to hide at least 6 milion there. You seemes not tho know diemnsions for it and why people moved.

Jens Holm
Reply to  Hide Behind

They should not only go back. The reasons why they came and still try should be changed. Thats the beginning fpr, they came.

Hide Behind
Reply to  Jens Holm

Yes the “reasons”, the part of equation that is not talked about in US and Europe by their leadership The true geopolitical reasons for the chaos are based mainly on Eurocentric views towards not just M.E. but Africa and S. America Central Asia, and S.E Asia, as being no more than lands and people’s as but mere resources.
The grand chess game whereby the pawns are to be used and discarded,
even sacrificed at their whim, with no harm to themselves.
Not absolving those leaders of the nations from all blame, those who let
their people’s live in ignorance and poverty, and yes ignorance because in the main they came from wealthy educated class while they individualy lived in luxury playing their chessmastrrs game.
Then the spoiled Europeans who having exploited their own resource wealth lived off of those poorer nations wealth, and lived realatively easy lives off of the bloodcost of those poor.
And the primarily white skinned played a life of deliberate iignorance or feelings of racial and religious supremacy over the exploited ones.
Yes I feel no pity for the Europeans who for so long have thought they had a consolidated culture only to find out now they were but wards of their states and they themselves are now looked upon by their leaders as no better than the immigrants, resources now to old and worthless, unless among their top 28% power groups.
They cannot protect their old herded cultures, not even themselves from being over powered by cultures deemed backwards, for all their plastic artificial lives.

who does that work?? private compagnies or the army??

So 489,500 return to SAA controlled territory who left when ISIS came in. Those same ISIS sat on the border with Israel and Jordan for 6 years without any issue with either country. So this almost half million souls don’t seem afraid of Bashar Assad. Does this mean this half million should be afraid of F.uk.us and evil siblings? As a resident of North America I am certainly more concerned with what the US will do to me than what Assad could. I see the actions of F.uk.us as endangering their citizens by alienating the rest of the world against F.uk.us.

I am quite pleased the Syrians can return home. Any entity that profited by these wars should be asset stripped and permanently lose the right to do business, of any kind, anywhere. Companies disassembled, this kind of business has no place in an increasingly precarious world.