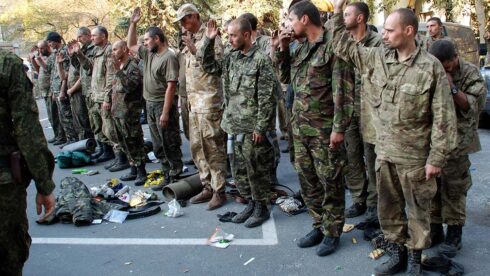 Ukrainian servicemen surrender in the Donbass

“In five days, 126 servicemen of the Armed Forces of Ukraine surrendered, their total number is 6489 people,” Russian Minister of Defence said.

All the Ukrainian prisoners are provided with necessary medical assistance and good conditions.

Moreover, during the press conference, the Russian Defence Ministry revealed that over the past ten days, the Russian military has destroyed 51 units of military equipment supplied by foreign countries to the Ukrainian Armed Forces, including 12 armored vehicles, 21 155-mm howitzers, two multiple rocket launchers and 16 drones.

Earlier, on June 6, President of Ukraine Vladimir Zelensky reported that more than 2.5 thousand Ukrainian soldiers are in captivity in Russia, almost all of them surrendered from the Azovstal plant. The issue of prisoner exchange, according to the Ukrainian president, is handled by the General Directorate of Intelligence (GUR) of Ukraine.

Most recently, on June 4, Russia and Moscow exchanged bodies of dead soldiers in the Zaporozhie region. LINK

Where are the nato generals?

they are in a Pedo Island !!!! and Happy to take in the anus for a little group of lgbt unicorniuns Nazis !!!

I get over $25k a month working part time. I kept hearing other people tell me how much money they can make online so I decided to look into it. Well, it was all true and has totally changed my life…This is what I do, check it out by Visiting Following Link open here……… 𝐜𝐚𝐬𝐡𝐬𝐢𝐭𝐞.𝐭𝐤/

Safe in a bunker with 50 miles of Ukrainian meat between them and danger..

GENERAL NOVOROSSIA DEATH TO UKROPISISASHKENAZISTAN
Reply to  Severdonetsk was 100% liberated

The fucking mariupol is 100% liberated copium retard is going to have a mental breakdown and keep changing the city name in his handle until all of them fall, one by one 😆

Just a troll trying to cope.

We killed more ukro generals than you did, and 3 just last week. 😂

Die in a fire, worm.

One of them is attached to the smelly piece of meat in your mouth. Be careful not to choke on it.

Severodonetsk has been liberated by V.V Putin.

ukranian forces kill pudin of cancer 100 times !! ukro parazite lgbts won the special nazi banderitas lgbts 1000 times, and you make a blow job to nazis and have a monkey in the anus !!!

Alexander The Transnistrian
Reply to  Muhammad your Prophet

Keep crying while Russia is winning 🥱🥱🥱

GENERAL NOVOROSSIA DEATH TO UKROPISISASHKENAZISTAN
Reply to  Alexander The Transnistrian

That’s all he does, cry

Putin lives rent free in this dude’s head, probably shagged his mum or something 😂 he’s such a whiny loser this ukroscumbag

Muhammad your Prophet
Reply to  GENERAL NOVOROSSIA DEATH TO UKROPISISASHKENAZISTAN

Putin lives rent free on every Russian’s head. He’s a terrorist and a dictator. That’s what lunatics like him do. They the life out of their own people.

Last edited 5 months ago by Muhammad your Prophet
-13
Reply

aka22
Reply to  Muhammad your Prophet

Damn! In my country the president lives in a palace (Cotroceni), rent free, all accomodations, free wifi, air conditioner and even free meals even fo his dogs and cats! Yet Biden lives in a house, poor old soul may that be a white house. And he pays the rent while diligently paying utilities, including toilet water and paper. When his dog played around and smashed the old tv set in the oval office, Biden rushed to Walmart and bought a new smart tv set cause why should american tax payers pay for the dog being naughty? He payed using the debit card where the 10% for the big guy stolen fiat money were stored. Yes! Putin lives rent free on every Russian’s head.

But they all stand tall, straight posture and proud bearing the burden.

How is it in your country now?

Ghost kills from the Ghost of Kiev

GENERAL NOVOROSSIA DEATH TO UKROPISISASHKENAZISTAN
Reply to  Muhammad your Prophet

How pathetic you are, spamming here night and day in anger and desperation. You have no life no friends

Muhammad your Prophet
Reply to  GENERAL NOVOROSSIA DEATH TO UKROPISISASHKENAZISTAN

And look at you. Still responding like a fucking moron.🤣🤣🤣🤣🤣

Trotfox
Reply to  Muhammad your Prophet

Interesting and important figures. But are those 6489 captured by RF or RF/DPR/LPR?

who cares about lgbts unicorniuns gays corrupted nazis !? how they love to kill civilians and hide behind then !?

The Russian MOD usually announces the clobber list as an aggregate.

What difference does it make?

They are captured by LF/HF/UHF/MF. Who cares anyway. The main point is they have surrendered. Meaning they had enough.

The heinous crimes that NATO regimes have committed globally would be returned back to them with a greater surprise.

This is the best possible news for Russia but even more so for all the wives and children of the Ukrainian soldiers who will live to return to their families instead of dying for a cause that is completely corrupt and unattainable. The cause is corrupt because the Ukrainian armed forces do not fight for freedom but to preserve an oppressive militant dictatorship in a nation with a population who suffer from the most severe form of brainwashed anti-Russia hatred. The cause was unattainable because unlike Ukraine, Russia is a united, patriotic nation with principled leaders. It has taken Russia centuries of hardship, sacrifice and perseverance to reach the pinnacle height of greatness on which they stand today.

Well said. If I were a Ukrainian soldier I would get on the most gallant white horse I could find, grab the largest white flag I could carry and ride over to the Russian side. When Zelensky takes up a dug in battle position on the front line so would I. No courageous man has ever served under a coward. By its very definition courage does not allow this to be done.

So true, Zelensky has been seen during this entire conflict in other countries, in a singing competition in France smiling and giggling while his soldiers are dying on the battlefield. The level of cowardice, indifference and arrogance of this clown and his little gang is unbelievable. Our politicians in the west have reached an absolute state of corruption that is only facilitated and allowed to fester because of the apathy of the populations of the west.

Most likely 4,500 captured in Mariupol and 2,000 in other fronts. Excluding Mariupol average 140 captured per week. Last 5 days showing quite the same speed.

It’s nothing, compared to the 30000 more russian soldiers kia. They really should put Indian officers in charge, as I said earlier. The russian army still fight like in WW2, it simply won’t work against NATO trained ukrainians. We Indians fought and won against Brits, also know the tactics of the NATO very well. And we have a modern society, we don’t have to steal toilets and washing machines like Russians do. We are superior but we still support our russian brothers.

You know the necessary strategy is to spare civilian lifes. Russia doesn’t only have to liberate land, but also need to gain the hearts of the people. One thing is to defeat the enemy, another thing is to keep the land. People must accept you. That’s the strategy. They don’t want to just occupy land, they want to integrate it because people are going to want to. And your numbers might be off. 30k dead Russians? Where do you have that number from?

Hey Ash, I’m pretty sure India fought the Brits with protests for awhile before the colonies(which is you) got steam rolled by the Japanese empire. A country with a total population at the time of around 45 million who was also kicking the crap out of China at the same time. They had to use steam engines to get down to you guys but they still handed you all your ass and your hat for 4 years until the Colonizers showed back up and saved you. The west granted you your independence because they realized you could still exploit a populace without micro managing the foreign governments they controlled. A nations history has nothing to do with the tactics an army will use to win. If you’ve got a cool idea about tactics then just share it.

US Army Commander Stephen Twitty: “Losses of the Armed Forces of Ukraine could amount to 200,000 soldiers”

At the end of the 102nd day of the Russian-Ukrainian conflict, the former deputy head of the US European Command, Lieutenant General Steven Tweets slashed the truth. In the “square” he was immediately signed up as a Putinist, and labeled as a prisoner, instead of listening to the military, who went from the commander of a rifle platoon to the commander of the First Army of the United States.

Add, Twitty is a combat officer. From June 2001 to June 2003, he commanded the 3rd Battalion, 15th Infantry Regiment during Operation Iraqi Freedom, and his Task Force 3-15 was awarded the President’s Unit Citation. In short, the general sniffed the gunpowder, which cannot be said about the political leadership of Kyiv.

According to him, 200,000 soldiers mysteriously disappeared from the Armed Forces of Ukraine. “Who knows where they are today?” the general asked. This huge number of the military is simply not in the field of view of American curators. Either there was disinformation with mobilization, or much worse – they were defeated. At the same time, the Yankees from the “Ze-team” hear a lot about “Russian losses”, but the United States wants to know the real picture, and not the propaganda of the arrestees.

This statement is consistent with the publication of the German “Der Spiegel”: “The German Foreign Intelligence Agency (BND) believes that Ukrainian resistance may even be broken in the next four to five weeks. In a series of secret briefings in recent days, BND analysts have noted that the Russians are capable of conquering small swathes of territory every day. The BND believes that Russian troops can take the entire Donbas under their control by August.”

Ukraine (what’s left of it) and NATO are going to howl and knash teeth about it, but Russia will not stop until Odessa and any territory needed to secure it from hostile action is gained. Another stupid American regime change gambit will have seriously exploded in their faces, Ukraine will be truncated, and the EU will be seen for the stupid and less prosperous people that they are. In 5-10 years Russia will stronger than ever.

Russia should treat these POW’s exceptionally well ensure their condition is well known to the Ukrainian people. Doing so would encourage more Ukrainian troops to surrender.

This is a great opportunity for Russia to win the trust of (at least) some Ukrainians, and possibly hasten the end of the war. Let’s hope the Kremlin doesn’t waste this chance.

Russia has been treating them humanely and even letting the prisoners call their families. I agree with you completely that the more Ukrainian soldiers surrender, the faster the war will end but more importantly these Ukrainian soldiers will live and not die for a lost cause.

One cannot throw soldiers into the front line unequipped, badly trained and supplied and then expect them to be at their best. Ideology isn’t going to keep you safe on the battlefield or warm in the trenches. Some units were abandoned by their commanding officers according to some Ukrainian soldiers.

Quite soon the Kiev junta is going to run out of Russian servicemen to exchange. Maybe they might use civilians instead. They could always pay in gold, if they still had some.

Why exchange soldiers that will be re-armed and sent back to the front?