About 100 ISIS members have been killed since the start of the Syrian Arab Army (SAA) operation against the terrorist group’s cells in the area of al-Safa at the administrative border between the provinces of al-Suwayda and Rif Dimashq in late July, accordign to pro-government soruces.

Up to 25 ISIS members were killed last weekend when the SAA ambushed an ISIS unit withdrawing from al-Safa. The rest were mostly eliminated in artillery and airstrikes by Syrian forces.

Meanwhile, the Syrian state media reports that SAA units are working to strengthen their positions in the al-Safa hills thus increasing pressure on the remaining ISIS cells in the area. 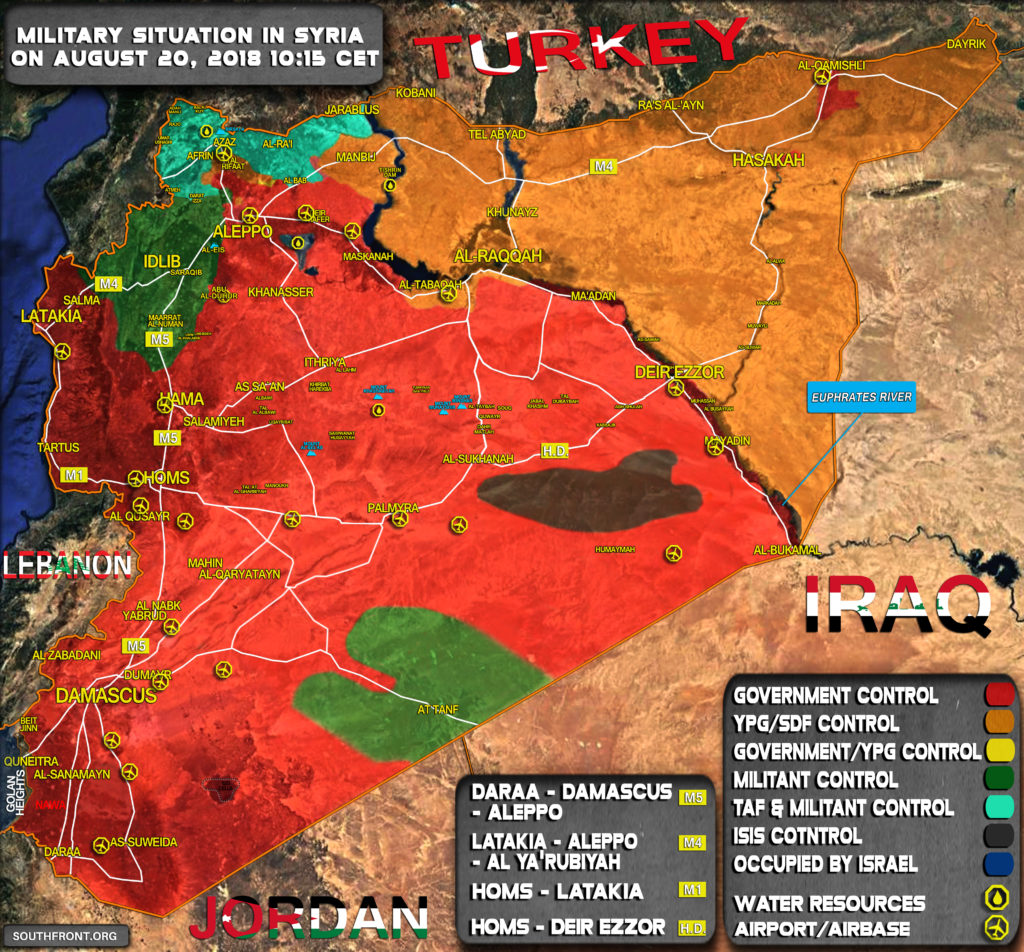 We appear to be in a virtual News Blackout from the SAA. This has always been a precursor of extensive military operations.

And rightly so. Imagine if D-Day or Bagration had taken place amid a flood of social media messages from the troops and constant news releases? In order for the hammer to fall successfully it has to fall where and when the enemy does not suspect.

Lol follow https://twitter.com/thearabsource for live feeds and news of the SAA. The Sweida op is due to end in 2 weeks tops. Isis will surrender in 1 week unless beaten before because of the shortage of food, ammunition and supplies. After this, the SAA will redeploy to Deir Ezzor desert and finish them off.

There is still the problem of ISIS deployments by the US from Al Tanf, Hassakah and from clandestine US bases in Iraq do cater for I think .

The calm before the storm!!!

Are SAA-Russia still having problem taken al-Safa area ? I wonder why it has been taken so long to get rid of the terrorists in this are, it looks like that they shouldn’t have so big problems.

Its an extinct volcano, with a high rim and a very rough interior that is some what flat. That is an illusion though as its full of frozen waves of lava in unpredictable forms, caves etc. In the reconstruction of Syria it would be an ideal source for the rock and sand as volcanic materials seem to produce extremely strong concrete.

its a volcano, not very human-friendly terrain lol

where’s the dudes that were saying the SAA doesn’t kill ISIS in the area.

They are engaged in a circle-jerk with their eyes and ears tightly closed so as not to spoil their pleasure….

If ISIS hide their faces still I can find that they are US and UK army that used for stealing lands globally. They are global thieves and terrorists.

We must include PAkistan brainwashed training mosquitas.

Hitler liked islam for germany and to destroy christians and their morality.

Die.with a song on their lips? Irrelevant to their destruction.

Is that a hijab I see before me?

Dear SF, the word “ongoing” is pleonasm and gives the impression that the writer is an American or an English English Lit graduate (“the horror, the horror”).