It is obvious that the US armed forces are gearing up for a summer of confronting China, and that this is going to be effected on land, by sea, and in the air. But provocation cannot be accepted indefinitely. 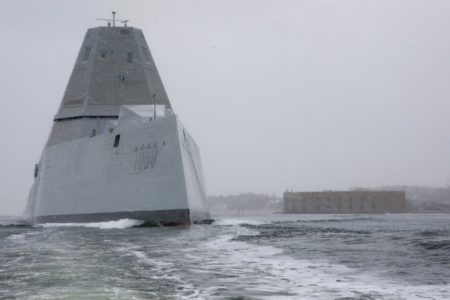 Freedom of Navigation is most important, and the United Nations Convention on the Law of the Sea lays down that “The high seas are open to all States, whether coastal or land-locked. Freedom of the high seas is exercised under the conditions laid down by this Convention and by other rules of international law.”

The generally accepted definition of freedom of navigation is “the right recognized in international law especially by treaties or agreements for vessels of one or all states to navigate streams passing through two or more states.”

The United States is the self-appointed guardian of the Seas, and has declared it “will exercise and assert its navigation and overflight rights and freedoms on a worldwide basis in a manner that is consistent with the balance of interests reflected in the Law of the Sea Convention.” There is only one problem with this, in that the US Senate refuses to ratify the Convention, which makes nonsense of the constant threats by Washington that everybody must obey it or there will be the United States to reckon with, in the shape of the US Navy which roams the seas with its eleven aircraft carriers, 9 amphibious ready groups (more accurately, strike squadrons), 22 cruisers and 66 destroyers with, down below, some seventy submarines. Nuclear weapons abound, but nobody knows which surface vessels carry them (except the intelligence services of China and Russia), because it is policy to “neither confirm nor deny” if nuclear weapons are on board.

It is remarkable that the only national leader ever to have publicly condemned the “neither confirm nor deny” rule was New Zealand’s Prime Minister David Lange in 1984 when he “barred the visit of the American Navy destroyer Buchanan after Washington refused to say whether it was nuclear-armed or not.” The US then demonstrated its maturity and “suspended naval manoeuvres with New Zealand and stopped sharing intelligence information with it” and cancelled a high level security conference. Lange showed his disdain for such antics when speaking at a farewell dinner for the US ambassador, H Monroe Browne, in 1986. The ambassador, as with so many US heads of mission, was a rich man who had bought his appointment, and he owned a racehorse called Lacka Reason, about which Lange observed that “You are the only ambassador in the world to race a horse named after your country’s foreign policy.”

Which brings us to Washington’s shenanigans in the South China Sea.

Washington objects to China’s presence in the South China Sea. It upsets the US government that Beijing has continued to build various facilities, including airfields, on islands which in some cases are claimed by other regional nations as their own territory. On March 27 the Pentagon’s Randall Schriver told the House Armed Services Committee that China’s “activities in the South China Sea could be met with consequences elsewhere… We are intent on making sure no one country can change international law per the norms” — in spite of the fact that the United States has not ratified the Convention it quotes to support its aggressive activities in the South China Sea.

And these activities are extensive, including the current commitment of the 11th Amphibious Squadron’s four warships, of which the largest, the USS Wasp, carries F-35 advanced strike aircraft whose armament is not known because the Navy “declined to disclose… the assets aboard the Wasp due to operational security concerns.” The squadron’s current deployment in the South China Sea is consistent with US policy, as noted by Stars and Stripes which reported on April 4 that “The US regularly challenges Beijing’s claims by sailing warships within 12 nautical miles of islands that China has built up in the Paracel and Spratly chains. So far this year, the Navy has picked up the pace, conducting at least five freedom-of-navigation operations since January: one each through the Paracels and Spratlys, and three through the Taiwan Strait, the latest March 24-25.”

Additionally, the US Air Force, not to be left out of the in-your-face fandangos, regularly sends nuclear-capable B-52 bombers over the South China Sea. Nobody knows what they are carrying in the way of armaments, as “We do not discuss the nuclear capabilities of our operational bomber aircraft,” but on March 13 it was announced that “Two B-52H Stratofortress bombers took off from Andersen Air Force Base, Guam, and conducted routine training in the vicinity of the South China Sea… US aircraft regularly operate in the South China Sea in support of allies, partners, and a free and open Indo-Pacific… as part of US Indo-Pacific Command’s Continuous Bomber Presence operations.”

Then there is the US Army’s contribution to regional security and stability, which it seeks to improve by mounting exercise ‘Defender Pacific’ later this year. The Commander of the US Army in the Pacific, General Robert Brown, was reported as saying that the manoeuvres “will focus on a South China Sea scenario” and that the thousands of troops deploying from the continental United States “will get the challenge of coming to the Pacific with the Pacific-assigned forces already there. And we won’t go to Korea, we will actually go to a South China Sea scenario where we will be around the South China Sea.” Indicating the focus of its operations, “the US Army recently conducted a joint exercise with the US Marine Corps practicing raiding and seizing a small island in Japan’s southwest Ryukyu chain,” on the boundary of the East China Sea.

While all these manoeuvres will exercise soldiers, sailors and aircrew in their skills, which is part of the rich tapestry of military life, the overflights by nuclear-capable bombers, the combat ships provocatively manoeuvring close to Chinese-settled islands, and the practising of island invasion are also sending a message.

Washington cannot imagine for one moment that the Pentagon’s military antics will result in China withdrawing from even the smallest atoll. Not even the Bolton or Pompeo could think that the US campaign of confrontation in, around and above the South China Sea will persuade Beijing to bend the knee to Washington.

It is obvious that the US armed forces are gearing up for a summer of confronting China, and that this is going to be effected on land, by sea, and in the air. But provocation cannot be accepted indefinitely, and it will be interesting to see just how far the Chinese permit the confrontation to continue. What will happen after they blow a coat-trailing US destroyer out of the water?

These Jews morons of Washington have completely occupied sovereign states and their seas and want to take more. China should F-ck them hard. They only knows might and right law. They are evils inhumans.

The US Navy is the most expensive part of the US military and they are finally waking up to the fact that naval power isn’t the big stick it used to be. The reality is the US is pulling back from China, trying to get out of range of Chinese missiles. And it’s not just China, the 5th Fleet HQ in Bahrain is virtually abandoned.

The funny thing is, it seems the US did not know that Russian missiles on corvettes in the Caspian sea could reach their base, until Russia used them to take out an Israeli ISIS command post in Syria. In a major panic, the whole 5th fleet put to sea within hours of the missile strike, and now they loiter in the Arabian Sea, safe, they think.

I don’t know how many trillions the US spent on its Navy, but its use by date is fast approaching.

If the weapons are so accurate, launch some missiles, and show the sailors some fireworks, but don’t take out the ships. Let them retreat in fear.

“with its eleven aircraft carriers, 9 amphibious ready groups (more accurately, strike squadrons), 22 cruisers and 66 destroyers with, down below, some seventy submarines.”

Confrontation between the US and China cannot be avoided; ultimately they will clash. The result will be world war. But it might start as a case of the dog wagging the tail. There are multiple flash points. Whenever it happens, however it happens – it will happen. That’s clear from the pattern of history. https://www.ghostsofhistory.wordpress.com/

nice 1 sinbad…also, the one thing the world can be absolutely sure of, is america will never attack another country [cuban size is ok ]. for all their talk & their ‘land of the free & home of the brave” they are the most gutless nation of all, after israel. israel, one could assume, taught the yanks, how to send your friends in to absorb some death & avoid the histrionics of blame. rest easy our chinese bretheren