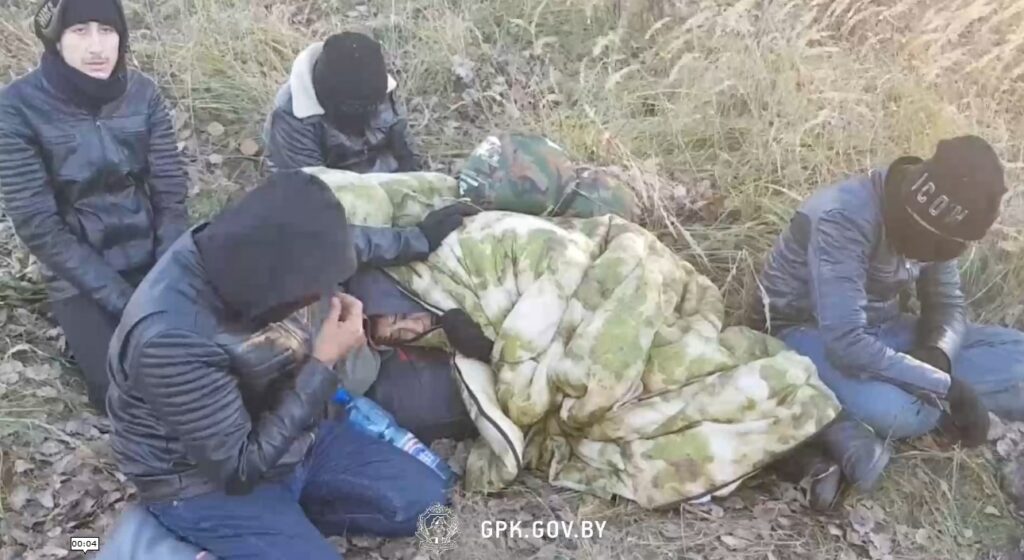 Earlier the family of this women entered the territory of Poland through the Polish-Belarusian border.  At the moment when the refugees were detained by Polish security forces, they were deep inside Polish territory.

They turned to the authorities and requested refugee status.

Instead of considering the petition, the Polish security forces loaded them into a car and brought them back to the border with Belarus.

According to the Border Committee of the Republic of Belarus, the refugees were forced to violate the border towards Belarus, using physical force and threats.

During the fierce beating, a pregnant woman was kicked in the stomach several times.

According to the woman’s son, this was done in front of her husband and son “… an elderly Polish serviceman with one star on his shoulder straps.” After that, the woman started bleeding.

Belarusian border guards immediately called an ambulance, which took the victim to the Kamenetsky district hospital.

Unfortunately, due to her injuries, the woman lost her child.  The woman’s condition is assessed as moderate.

Brutal violence by Polish security forces has become a common occurrence for refugees trying to enter the EU through the Polish-Belarusian border. These people constantly claim that they were forced to leave their homeland due to the war and the plight caused largely by the actions of the United States and EU countries in the Middle East.

If this have had happened in Germany, they would call the people who did this Nazis. But it happened in Poland, so they end up being the “bad people” only.

Its Illegal immigration, child father deserve jail for traveling with his child when temperature drops below zero in central europe.

Off course, blame the victim who tried to do the best of many bad solutions for his family. Responsible people should all be put in jail, and all irresponsible should be awarded……………Hans Raus is fantastic.

and why they didnt want to travel to saudi arabia or UAe or quatar ? OFC blame west for their stupidity and cry -play stupid games, win stupid prizes

Iraqi and Syrian refugees should go to Egypt, Saudi Arabia, Turkey and Iran.

Are there no UN camps at the EU borders?

No there arent. There are a few transit/refugee camps but those are few and can hold a couple of hundreds people max. We are talking about a thousand people per day. They cant turn around, they cant stay, they cant enter. They are left in a limbo slowly wasting away dying in no mans land. Im anti immigration but Im pro Human. We should figure out a Human way to not let them die without letting them flood Europe.

There is a way, board a plane and send them home.

Many of these refugees are forced and manipulated and paid by your countrymen little boy.

Tommy the troll again!!! Wars caused by Israel in this case and their pro-Zionist lackeys in the West. Anyone who condones illegal immigration in any country in the world is tacitly approving of Western Predatory Capitalism and Zionists policy anywhere. By the way, do you see any of these people heading towards China????????????????

you shithole tards, Belarussian border guards throw her via fence holding her by hands and legs, thats why she lost baby. but who cares.

Everyday Yemen losses hundreds of people from war and starvation as a result of the inbred saudi lunatics.

Where are the news articles?

Ethiopians and Yemenis suffer the most. But the so called “immigrants” are terrorists and undesirables from the so called Middle East.

SouthFront, if you want donations, stop censoring!!! Otherwise, I might be compelled to say who’s really behind you.

They censor like theres no tommorow, sometimes about 20 comments disappear. But at the same time they can’t deal with scam bots? Strange…

The question is, are they deliberately deleting comments or is it some bad software? I think they ban certain IPs, it seems I’ve been banned multiple times, so they force me to make a new one. Like this will stop any trolling. Other sites like Zerohedge and OffGuardian don’t have those problems.

Do you really thinks they need donation? its so fake action they are founded by russian propaganda machine and this is cheap.