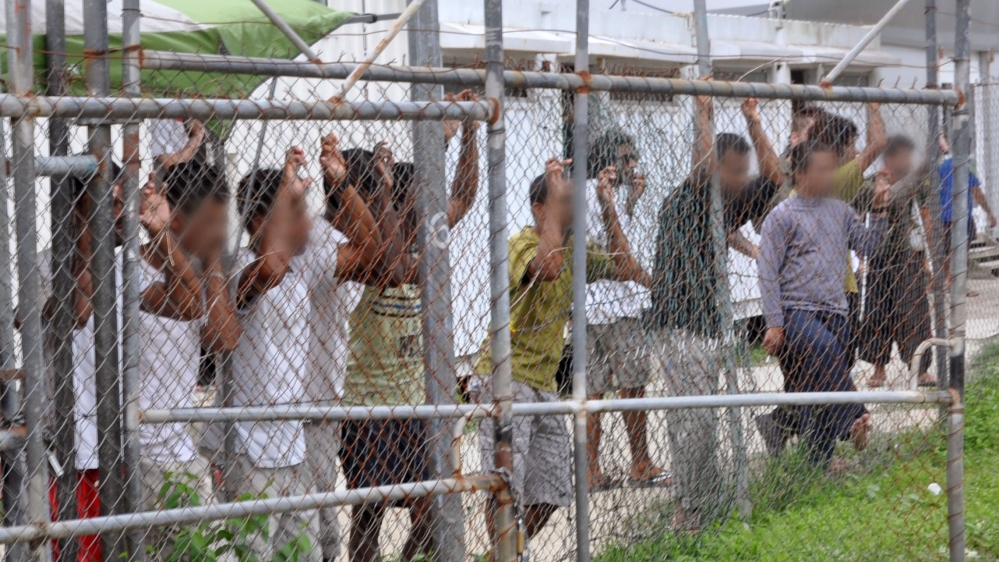 Obscenities occupy the annals of State behaviour, revolting reminders about what governments can do.  One of Australia’s most pronounced and undeniable obscenities is its continuing effort to gut and empty international refugee law of its relevant foundations.  Instead of being treated as a scandal, populists and governments the world over have expressed admiration, even envy: If they can get away with that, what might we do?

Along the way, Australia has also made its greatest contribution to deterring unwanted arrivals, creating the most ruthless, tropical detention network for individuals who, unblessed by paperwork, arrive by boat with the aid of people traffickers and are duly told they will never settle in Australia.  These “unlawful” arrivals – language itself in contravention of the UN Refugee Convention – are duly passed on the refugee camp conveyor belt, where they face ruination, despair and sadistic prison wardens.  To Manus Island or Nauru they go, awaiting settlement in another country.

In 2013, New Zealand offered some mitigation to these ghastly conditions.  Australia might have expressed no interest in resettling such arrivals, but New Zealand did.  Thus, that great tradition of outsourcing obligations and responsibilities was continued, with Australia preferring to let others do the heavy lifting.

That agreement involved Australia’s neighbour accepting 150 of its annual intake of refugees from Australian detention centres.  But the fall of the Labor government, and the coming to power of a conservative Coalition crazed by “turning back the boats”, all but killed the arrangement.

This did not stop other inglorious attempts on Canberra’s part to abdicate human rights responsibilities with the connivance of other countries.  In 2014, a resettlement deal was struck with Cambodia costing in the order of AU$55 million.  Unsurprisingly, only a few refugees availed themselves of this less than impressive arrangement.  The next year, Australia tried, in vain, to coax the Philippines with an offer worth AU$150 million.

The 2016 agreement with the United States, hammered out in the last days of the Obama administration, was seen as a diplomatic coup, obliging Washington to take between 1,250 to 2,000 refugees.  All would be subject to stringent US vetting.  Australia, in turn, would accept a much smaller complement of refugees from Central America.

These arrangements, with much justification, were rubbished by the newly arrived President Donald J. Trump.  In a now notorious phone call between Trump and Australian Prime Minister Malcolm Turnbull, the President suggested that this “stupid deal” might facilitate the import of terrorists into the United States.  “I do not want to have more San Bernadinos or World Trade Centres.  I could name 30 others, but I do not have enough time.”

In another action that could only be seen as ingratiating, Australia agreed, in 2017, to resettle 17 Cubans who were found desperately clinging to a lighthouse off the Florida Keys.  The pattern here should be obvious: Australia will do everything it can to evade, circumvent and subvert a refugee processing scheme that is humane and generous.

Under the current, revived understanding, New Zealand will accept 150 refugees from Australia each year for three years, but only those who are already in detention.  Canberra has made it clear that the deal will not apply to those subsequently making an effort to travel to Australia by sea.  “Australia remains firm,” stated Home Affairs Minister Karen Andrews, “illegal maritime arrivals will not settle here permanently.  Anyone who attempts to breach our borders will be turned back or sent to Nauru.”

Another nasty proviso is also applicable.  Those refugees resettled in New Zealand will be looked at as a special category should they wish to enter Australia.  According to the Australian Department of Home Affairs, they will be allowed “to apply for visas to enter Australia on a short-term or temporary stay basis only”. This would also apply even after the grant of New Zealand citizenship.

Government acceptance of this plan was only reached after what were described as “bullish” and “intimidating” negotiations between Australian Prime Minister Scott Morrison and non-government parliamentarians in 2019.  Independent Tasmanian Senator Jacqui Lambie even claims that she was threatened with jail were she to reveal any details of the plan.  “So, for the sake of humanity, I had no other choice but to shut up anyway to make sure that job was done.”

Lambie’s sense of humanity should not be exaggerated.  Negotiations with the government centred on securing her support for the repeal of laws permitting the evacuation of gravely ill refugees to the Australian mainland for medical treatment.  Compassion for refugees tends to be in short supply in the nation’s capital.

The opposition Labor Party, hardly a shining light in the refugee debates, have tried to make hay from the Morrison government’s change of heart.  “This is an absolutely humiliating backflip,” cheered Shadow Assistant Minister for Immigration, Andrew Giles.  “It should not have taken nine years and that is the other big thought in my mind, the cost to those individual lives and the cost to all of us in this pointless, cruel intransigence by Mr Morrison.”

While Australian Labor mocked, New Zealand Immigration Minister Kris Faafoi was self-congratulatory and business-like of his country’s record.  “New Zealand has a long and proud history of refugee resettlement and this arrangement is another example of how we are fulfilling our humanitarian international commitment.”  In marketing speak, Faafoi expressed his pleasure that NZ could “provide resettlement outcomes for refugees who would otherwise have continued to face uncertain futures.”

While 450 refugees will find safety and sanctuary in New Zealand, that does little for 500 others.  The beastly, cruel system remains in place, and promises to cost AU$2 billion next year.  If anything, this revived agreement shows how far countries have pitifully fallen in their responsibilities in providing safety for the vulnerable and damaged.

This shames me. I am disgusted with my government. They have redefined refugees and are criminals. All of them. If you can’t prove these people guilty in 3 months, they should be allowed to integrate. Disgusting and they call this the land of plenty. Still stuck in the White Australia Policy era.

At the risk of sounding callous, I am a Brit living in The NL and you lot should count your lucky stars. Thousands upon thousands of illegals are being “ferried” into both Countries I mention and whilst a generalisation that all are bad – the crime rate has shot up exponentially and cities are now becoming no-go zones… I would add though that most are from different geographical areas than those expected in NZ and Australia .. and I would swop the two groups with you instantaneously.

Are you saying that anyone who manages to physically arrive in Australia, by whatever means, should be allowed to “integrate” – so long as they don’t have a proven criminal record?….If that’s the case then there’d be many millions who would come.

I’m sure there have been some bad conditions at the detention centers (IMO it’d be better to simply send people back to where ever they came from), but simply letting everyone in strikes me as an even worse approach. Doing so would only encourage more human trafficking and more dangerous attempts to cross the sea in unsafe boats, leading to far more deaths!

While I’m not generally a big fan of the Anglo mentality, it seems to me that it’s a fundamental right of every country to decide who’s allowed to immigrate. Should Australia just allow anyone who manages to reach their territory (by whatever means) to live there?

I don’t doubt that there have been some abuses in the detention centers, but I think allowing people who arrive on illegal boats and via human trafficking to stay would cause more harm. This would simply *incentivize* more of it, and we’d see more people drowning due to unsafe boats, more people raped or robbed by the coyotes, etc.

Well, just give it a year or three of this latest round of national destruction and we might be on the receiving end. I know that ‘immigrants’ can be troublesome in many different ways, but lets put the blame where it should lie. The Europeans (and Americans) continually refer to ME (or in the case of US, S. American) refugees as immigrants, as do their govs. Therein lies a clue. Maybe if there were a conversation as to why they want to go to the EU(or US), there might just be some sort of solution. Oh, yes, I’m familiar with the arguments…corruption at home is the most often. War is not mentioned anywhere near as frequently. But absolutely NO discussion as to why and by who. Surely to hell it’s not the hidden hand of corporate colonialism is it? It’s the very same in the US, they only come for handouts and medical, is the mantra here. CIA backed drug cartels, corporate assassinations and US orchestrated coups don’t enter into it. Most people would prefer to remain in their homeland, that is a fact. But, when the US/EU/NATO decide to enslave economies or destroy govs there, why would they stay? What would you do in their place? While we might not see war here in the US (then again…) what is coming is going to be bad, as in really fucking bad. Then we will get to see what others have had to deal with. The problem for us will then be, will anyone let us in if things get so bad as to be untenable. Countries already at the bottom can’t really go lower, but have learned to cope and will probably be in a better position to weather the coming morass. Most likely, far better than industrialized and subsidized urban economies…which is a description of the west. When the SHTF, who will be in a better shape to weather it all? Countries like Russia, Iran and Venezuela…who have had to learn how to survive?…or countries like the US/EU that used to call the shots, but will have no friends going forward and likely worthless currencies too boot. The first wave of discontent will be domestic, those without looking for those with. Urban dwellers will be the hardest hit and the rural communities will become their victims. The collective west has had many chances to solve these issues, but as usual, their only answers are the same as they use in war…double-down, don’t turn around. We people of the west are just as culpable, we always knew the truth, but it was far easier to deny and ignore it. That will not be an option going forward. God help us, because I doubt the rest of the world will give a rats ass.

Don’t get me wrong. I’m completely anti-war and anti-imperialist. I’m just ALSO opposed to open-borders…..But who knows – with the way that the ruling class is destroying our economies these days, we (in the West) might not be such attractive destinations for immigrants anymore :D

Before the people smuggling networks were shut down it only took a fake refugee three days from leaving Tehran to boat arrival interception and refugee processing in Australia. It was ridiculous. An Egyptian terror suspect deported from Britain to Malaysia flew to Indonesia, took the boat trip to Ashmore reef and was then accepted as a genuine refugee until being uncovered as terror suspects deported from Britain. Him and his family are still in Australia. Australia’s Muslim community is a time bomb as it is . Adding to it via fake refugees is insane.