While Greece is collectively scratching its head why Tsipras et al were at loggerheads with Europe for 4 months, during which time the Greek economy entered a recession and saw its banks not only depleted of all cash but become de facto wards of the ECB, just to reach an “agreement” that could have taken place back in February, and attention shifts to just how Tsipras will pass last night’s impromptu capitulation through hard-line leftist parliamentarians, Greece now has another problem: how to unpivot the aggressive pivot toward Russia in the past few months, which culminated with the signing of an energy deal last week in St. Petersburg.

It goes without saying that if Greece is scrambling to go back into the Troika’s good graces, Belgium will make it very clear that any overtures to Putin are to be “cease and deceased” (sic) immediately. Which opens a can of worms for the Marxists in government: how to slam shut the door to their ideological Plan B, when everyone knows the Grexit fiasco will repeat again in a few months, and Greece will again be knocking on the Kremlin’s door.

For now, however, the situation is as follows, courtesy of Kathimerini: a rift appeared to have emerged Monday between Energy Minister Panayiotis Lafazanis (photo) and Foreign Minister Nikos Kotzias as regards the country’s energy policy, with the latter declaring that the government is fully in line with European policy in spite of a recent Russian gas deal that has ruffled feathers in Brussels.

The memorandum signed by Lafazanis and Russian officials in Saint Petersburg earlier this week foresees that third parties could be permitted to reserve the full capacity of the pipeline, something that runs counter to EU competition laws.

In comments Monday, Kotzias remarked that Greek energy agreements cannot include terms and conditions that “go beyond the legal framework and agreements of the [European] Union.”

A memorandum of understanding co-signed by Lafazanis last Friday foresees the continuation of the Turkish Stream pipeline which has yet to be built but, according to plans by Gazprom, would carry natural gas from the Black Sea to Western Europe.

According to the initial agreement signed by Lafazanis and his Russian counterpart Alexander Novak, Russia’s VEB development bank will own 50 percent of the 2-billion-euro route and provide all financing, while Greece will own the rest.

Incidentally, as Russian Vzlgiad reported today, an Italian Saipem pipeline driller has just commenced operations as part of digging the Turkish Stream which will cross Greece, now that the Bulgarian passage of the Southern Stream has been put on permanent hiatus. 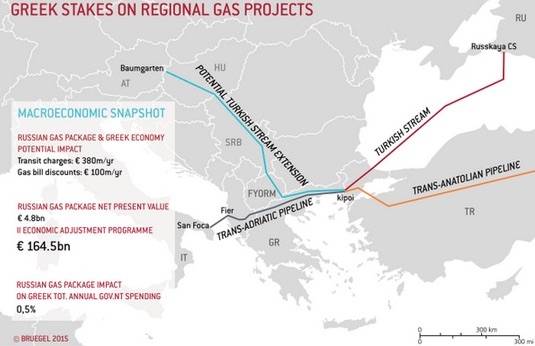 Clearly, as part of all future (if not the current) Greek bailouts, Europe will prohibit any Russian pipelines crossing Greece and entering Europe in expectations that the Syrian operation will finally succeed and the Qatar gas pipeline will supplant Gazprom as Europe’s primary provider of offshore energy.

So as Tsirpras scrambles to explain to his fellow countrymen why he did what he did, very soon he will have a much more difficult explanation: either telling Putin that Greece can no longer permit the Turkish Stream (and with it lose billions in direct energy investment with no Troika repayment strings attached), or tell the Troika that Greece is actually more independent than assumed by Belgium, which in turn would force even tougher bailout terms on the Athens government and the usual threats of cutting of Greek bank liquidity overnight if Greece deviates from Europe’s anti-Russia course.

In both cases more drama is assured.