Those devices were installed on tanks and vehicles with machine guns from nearly 8 months before. 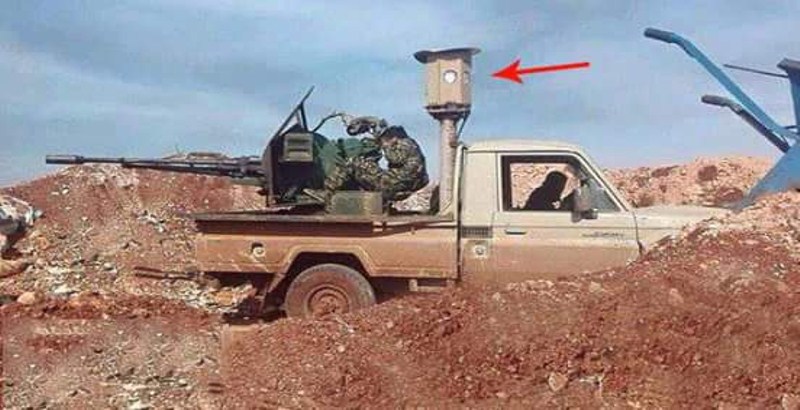 There are new photos and videos of the warring Syrian Army tanks and vehicles in which a new kind of extra device caused social media curiosity.

If someone looks closely to any recent photo of the Syrian Army military vehicle, one can easily finds out a small extension of a device similar to a small chimney.

Although SouthFront: Analysis & Intelligence could not independently verify the military vehicle mounted device, but it gathers report that it is a jamming device to deviate anti-tank missiles such as the U.S made TOW missiles which very available to the terrorists in Syria.

According to the report, those anti-TOW missile device works on two batteries which is enough to operate it continuously for 12 hours. The device is capable to protect the vehicle from the front,  right and left side.

However, several military reports said that those devices were installed on armed vehicles and tanks and vehicles with machine guns from nearly 8 months before.

Unintended Consequences: A Heyday For The Geopolitics Of Eurasian Transport

It looks to be the Doppler radar alert component of the Russian Arena ATGM system. In this case, it will just blare out a loud alarm when the Doppler radar detects a missile, RPG, what have you. The crews then have a few seconds to get the hell off the vehicle and take cover. No need for a $100k jamming system for a $10k truck.

Equipment/ materiel is easy to get, much easier than finding more Alawite or Shiite fighters.

Sean_in_Nyc, Most of the fighters in SAA are Sunni, so what is your problem with Shia?