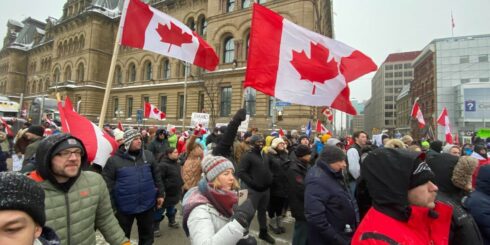 I have carefully read the Emergencies Act as well as the relevant sections of The Charter of Rights of Freedoms. I doubt Justin Trudeau has an understanding of the implications of his actions, not to mention his baseless accusations directed against Canada’s Freedom Convoy: 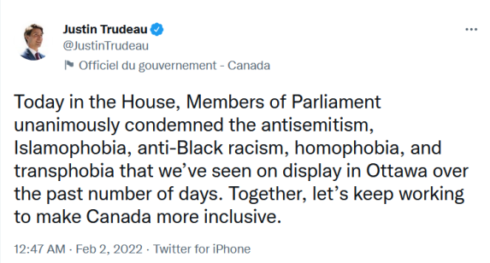 Were these allegations ratified by the House of Commons?

The nature of the Freedom Convoy is peaceful and non-violent.

See Global Research’s video: The Protesters are Honest and Respectful

Who Are the Criminals?

A  law enforcement procedure cannot be instigated by a Prime Minister who has blatantly violated the fundamental rights of Canadians.

Since March 2020, under the jurisdiction of the Trudeau government, entire sectors of our economy have been destabilized.  Small and medium-sized enterprises have been driven into bankruptcy. Unemployment and poverty are rampant. The mental health of millions of Canadians including our children has been affected.

“V the Virus” is said to be responsible for the wave of bankruptcies and unemployment.  That’s a lie. There is no causal relationship between the (microscopic) SARS-CoV-2 virus and economic variables.

We are dealing with a far-reaching and complex crisis which is sustained by a corrupt government, coupled with “fake science” and a relentless 24/7 fear campaign.

The government claims that the mandates are intended to “save lives”. Nonsense. 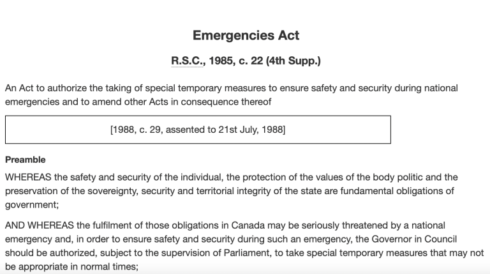 “a national emergency is an urgent and critical situation of a temporary nature that … seriously endangers the lives, health or safety of Canadians”.

Section 3(a): Does that Not Describe the Very Nature of the COVID Crisis?

The wording of Section 3 (a) of the Emergencies Act (quoted above, see also Appendix below) describes the chaotic political, social and economic and situation which has affected the lives of Canadians in the course of the last two years.

The corona crisis under the helm of a corrupt government is undermining the structures of civil society as well the democratic foundations of Canada as a Nation State.

At this juncture in our history, on behalf of all Canadians, the formulation of emergency procedures directed against the reckless rule of the Trudeau government should be instigated.

The Charter of Rights and Freedoms:

“protects those basic rights and freedoms of all Canadians that are considered essential to preserving Canada as a free and democratic country. It applies to all governments – federal, provincial and territorial.”

Those rights are being encroached upon by the Trudeau government.

Moreover, Trudeau’s decision to invoke a National Emergency is an encroachment on the jurisdiction of the provinces and territories as outlined in Section 3(b) of the Emergencies Act (emphasis added):

“For the purposes of this Act, a national emergency an urgent and critical situation of a temporary nature that ….(b)

seriously threatens the ability of the Government of Canada to preserve the sovereignty, security and territorial integrity of Canada and that cannot be effectively dealt with under any other law of Canada. (emphasis added)

In recent developments, Quebec, Ontario, Alberta and Saskatchewan have confirmed their intent to withdraw the vaccine passport.

3 For the purposes of this Act, a national emergency is an urgent and critical situation of a temporary nature that

(a) seriously endangers the lives, health or safety of Canadians and is of such proportions or nature as to exceed the capacity or authority of a province to deal with it, or

(b) seriously threatens the ability of the Government of Canada to preserve the sovereignty, security and territorial integrity of Canada and that cannot be effectively dealt with under any other law of Canada.

(a) altering the provisions of this Act; or

(b) providing for the detention, imprisonment or internment of Canadian citizens or permanent residents within the meaning of subsection 2(1) of the Immigration and Refugee Protection Act on the basis of race, national or ethnic origin, colour, religion, sex, age or mental or physical disability.

Justin Trans-Trudeau condemned antisemitism, homophobia, transphobia, islamophobia, anti-Black racism (anti-white racism is ok, I guess). None of that crap has anything to do with these protests. just usual hysterical mantras by mainstream politicians and media.

There are few blacks in Canada and many Muslims are so radical that they don’t respect native Canadian laws.

The article not even has a comma for something better then this.

It is correct though